Community forestry has been a global success story for Nepal, none more so than those in the buffer zone of the country’s many national parks. 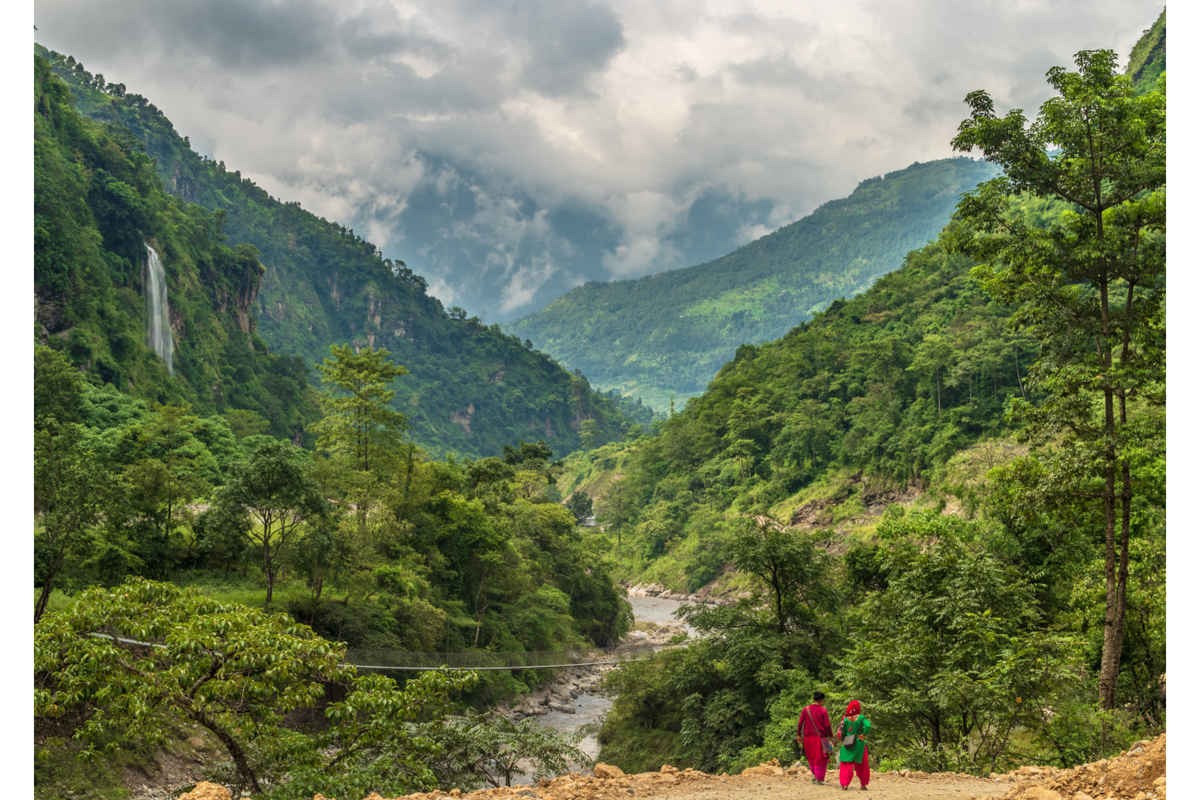 Thirty years ago, the Kumroj community forest in Kharahani was just open ground. The land had been cleared of timber by loggers and locals from the nearby Harari village grazed their cattle there.

“There were no trees. We could easily see Padampur village, which is about five kilometers away,” said Rana Bahadur Shrestha, president of the Kumroj community forest.

Now, the forest houses thousands of trees, along with plants, wildlife, and other biodiversity. The forest is managed by the local community, which in turn obtains many resources, like firewood, timber, thatch, and herbs from the forest.

The Baghmara Community Forest too was in the same state around 30 years ago. Trees had been cut down and the land had been encroached upon.

“There was only bush, no trees. Land mafia had encroached the land and villagers had no access to it,” said Jit Bahadur Tamang, president of Baghmara community forest.

Baghmara community forest too is now lush with trees and provides much-needed access to forest resources for the community.

There are 70 or so buffer zone community forests around the Chitwan National Park and they have long been hailed as a global success story when it comes to maintaining forest cover and protecting wildlife with the active participation of local communities.

According to Biswo Nath Upreti, the first chief warden of the Chitwan National Park and former director-general of the Department of National Parks and Wildlife Conservation, forest conditions were terrible around the park. Upreti, who was a team member of the border determination committee of the Chitwan National Park, says that while the forests inside the park itself were protected, the areas outside of its borders were prey to loggers and timber smugglers. It was only when the authority to manage and maintain these forests was handed over to local communities via the 1993 Forest Act that the trees began to flourish once again.

According to the 2015 State of Nepal’s Forests report produced by the Department of Forest Research and Survey, forest cover accounted for nearly 45 percent of the total land area, up from around 29 percent in 1990s. Forestry experts attribute much of this success to community forestry.

The transformation of Kumroj not only benefits the local community but also the national park’s wildlife. Animals, especially large predators, maintain large ‘home ranges’, areas where they spend their time and which contain all of the resources required for them to survive. The resurgence of the buffer zone community forests now allows them adequate home ranges that are not limited to the national park.

“Wildlife habitats were limited only to the area of the national park,” Shrestha said. “But now wildlife can be seen easily in the community forest area.”

The Kumroj community forest covers approximately 1,300 hectares and provides habitats for dozens of species of birds and animals like tigers, rhinos, and deer. According to Ganesh Adhikari, information officer at the Chitwan National Park, more than 15 buffer zone community forests have developed into wildlife habitats, with Kumroj, Tikauli, Baghmara, Jankauli, and Namuna primary among them.

According to Shanta Raj Gyawali, former director-general of the National Trust for Nature Conservation, the community forests have provided a natural extension for the national parks and that is facilitating the growth of Nepal’s wildlife numbers.

The Nepal government initially began the buffer zone community forest concept to reduce the dependency of locals on the national parks for grass and wood.

“The primary objective was to make it easier for people to obtain grass and wood without venturing into the parks,” said Sindhu Dhungana, a joint secretary at the Ministry of Forests and Environment. “The concept eventually went on to play an important role in conservation.”

According to Dhungana, between 1962 and 1990, the nationalization of private forests and a rapidly increasing population resulted in a loss of a large amount of forest cover. The lack of private ownership, accompanied by a failure by the state to provide proper oversight, led to massive exploitation of the forests. While locals used the forests to meet food, fuel, and housing needs, timber smugglers and industrial interests mowed down large swathes of forests to sell the wood or clear the area to build it up.

Community forestry was enacted with the recognition that local communities are the primary stakeholders in the protection of the forests. Providing management authority to centralized bodies was often counterproductive as these bodies did not understand local needs and conservation efforts. As communities actively depend on the forests for their daily needs and livelihoods, they have a strong interest in protecting them. Local communities also tend to have long years of indigenous knowledge on forest protection and methods to harvest forest resources sustainably.

“Nepal’s forest area has increased due to protection by the community,” said Bharati Pathak, president of the Federation of Community Forest Users Groups Nepal. “If the people did not participate in conservation, Nepal would not be at the stage it is today.”

Nepal’s forests today don’t just provide habitats for wildlife and resources for communities but also carbon credits to the tune of 500 million to 1 billion tonnes. In 2021, Nepal signed a deal with the World Bank’s Forest Carbon Partnership Facility that will allow the country to sell up to 9 million tonnes of carbon for up to $45 million.

The community forest user groups invest this income right back in the community. The Baghmara user group, for instance, has provided accident insurance of Rs 1 million each for 717 people in the Badreni village. Over 2,000 livestock have also been similarly insured.

“We’ve started with one village but we will extend the insurance program to more villages in the future,” said Tamang, president of the Baghmara community forest. “We have also invested in roads, education, and in efforts to reduce conflict between wildlife and humans.”

Likewise, the Kumroj community forest has invested Rs 6,000 per family for a new water tap while pregnant women and new mothers receive Rs 2,000 as allowances.

“We are also supporting schools and providing compensation to the families of victims of wildlife conflict,” said Shrestha.

All of these achievements, however, stand at risk of being lost. FECOFUN, the umbrella organization of community forest user groups, has been protesting the planned expansion of protected areas for months now. Under the new federal system, various levels of government have planned to establish or expand existing protected areas, many of which infringe on the existing community forests. This would take authority away from the communities and place it in the hands of government authorities.

“These parks, reserves, buffer zones, environment protection areas, and forest protection areas are being created on lands managed by user groups. They are also leading to the destruction of community forests that have been historically protected and sustainably harvested by local communities,” Dil Raj Khanal, FECOFUN policy adviser told Monga Bay. “We request that the government bring an immediate stop to these activities.”

Mukesh Pokhrel  is a Kathmandu-based journalist. Pokhrel writes issues on climate change, environment, social, and political. He has two decades of experience in the Journalism field.

As the world heads towards the annual climate conference, Nepal needs to push for more climate financing and support to mitigate outcomes and adapt to climate change.

An average of 100 animals die every year from unnatural causes around Nepal’s national parks, primarily due to unplanned construction of infrastructure.

The risk is most acute for residents of the Khumbu region, which hosts a majority of the country’s glaciers and has settlement areas close to retreating glaciers.