Geopolitics, globalization, and climate change are affecting yak populations across the Himalayan region 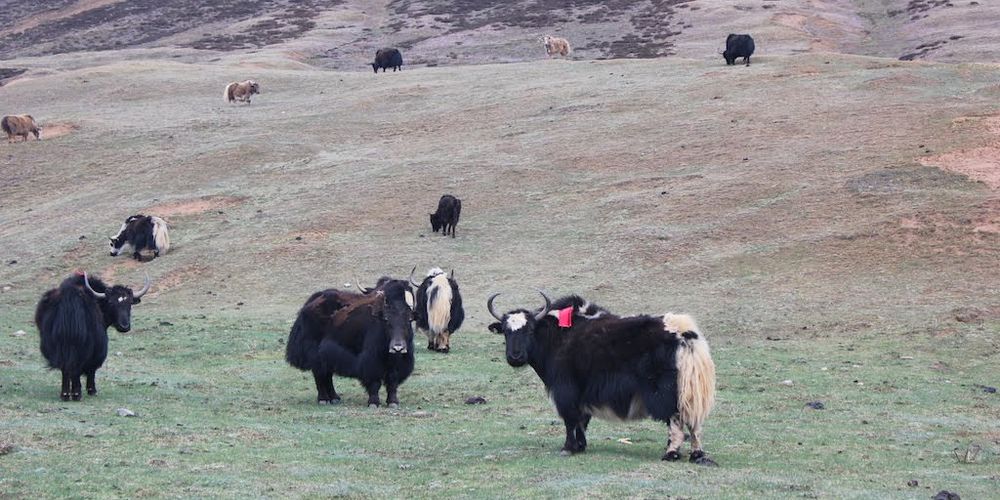 This story first appeared on The Third Pole on August 18, 2016. It is republished here under Creative Commons license BY-NC-ND 2.0.

The yak is one of the most enduring symbols of the high Himalayas. Whether you visit Tibet, Bhutan, India, or Nepal, you will inevitably find tourist shops selling t-shirts with the animals depicted on them. As the largest animal on the Tibetan plateau—it can be as tall as 2.2 meters at the shoulder, and weigh up to a thousand kilograms—and its surrounding regions, the yak is a “flagship species,” and indicates the health of the ecosystem within which it lives. Unfortunately data indicates that the yak is in trouble, and it is in trouble for reasons that affect most of the countries in the Hindu Kush Himalayan region.

In May 2016, the International Centre for Integrated Mountain Development (ICIMOD) published a report titled “Yak on the Move: Transboundary Challenges and Opportunities for Yak Raising in a Changing Hindu Kush Himalayan Region.” This publication is based on research papers that were submitted at the 5th International Conference on the Yak held at China’s Lanzhou Institute of Husbandry and Pharmaceutical Sciences August 27-31, 2014. ICIMOD has been organizing such conferences since 1997, and this time the co-organizer was the Yak and Camel Foundation of Germany. The conference allowed people from all the countries where the yak is raised, from Afghanistan to where India meets Myanmar.

The yak is a high altitude animal, usually found 2,000-5,000 meters above sea level. It is superbly adapted to the climate of the area in which it lives, which includes conditions of “cold winter, low oxygen content, high solar radiation, and cyclical nutrition with short growing seasons.” Of the estimated 15 million yaks in the world, 90 percent live on the Qinghai-Tibetan Plateau region, within Chinese borders.

There are multiple reasons for this decline. One of the main reasons is the harsh lives that the yak herders live. Yak herders come from the most marginalized of communities, and while the yak may be adapted to the conditions, humans prefer comfort. As globalization offers more opportunities, the young men of the mountain communities raising yaks find other jobs, and other places to go. As other avenues for economic progress open up for “previously remote yak-raising areas, people have begun to question whether this traditional lifestyle can be maintained.”

The cost of human borders

Yaks have adapted to high altitudes, but not to human-made lines on the map. As wars and conflicts have led to the closing of borders, the yaks outside Chinese borders are “thought to be suffering from inbreeding due to the lack of availability of new yak germplasm from the original yak area, the Tibetan Plateau, during the past few decades, and the resultant practice of prolonged use of the same bull within herds.” As such, the yaks are smaller, and more prone to disease. These problems cannot be dealt with except with a transboundary lens, because the problems that created them are transnational in scope.

One paragraph perfectly captures how the yak herders in Little Pamir in Afghanistan have suffered.

In the 1890s, Badakhshan was divided into two by Russia and Great Britain, and the Kyrgyz people in Little Pamir were separated. This border was then strictly restricted after the 1930s by the Soviet Union. After the 1950s, the border between Afghanistan and China in the Wahkan Corridor was closed, leaving no possibility for the Wahki and Kyrgyz herders to get new yak germplasm from outside. The limited trade between Pakistan and Afghani Wakhan was also blocked after the 1990s due to terrorism concerns. The Wakhan corridor and the Afghan Pamir have thus become an isolated ‘island’ in terms of the exchange of yak genetic resources and the yak husbandry economy.

As borders have closed, and climate change has led to uneven production of grass, the yak herders find themselves fenced into grasslands which are under greater pressure. The only silver lining for them is that, as the Himalayas warm up, some types of vegetation will reproduce at a better rate. Unfortunately the yak, which cannot stand high temperatures, may not be able to enjoy the new snacks.

It is not all bad news, though. The papers include looking at interbreeding between yak and local species of cows in Gilgit-Baltistan, and also how China, which hosts the main population of yaks, can look at improving production while being sensitive to local community concerns related to culture and religion. One of the papers from China also looks at genome mapping of both wild and domesticated yak. Given that it hosts the largest population of the animal, and the resources it has, it is possible that as China helps open the new Silk Road, it may also show the way to preserve the majestic yak in cooperation with its neighbors.

Omair Ahmad  Omair Ahmad is a journalist and political analyst. He is the South Asia managing editor at The Third Pole, and the author of “The Kingdom at the Centre of the World; Journeys into Bhutan.”