The Kathmandu Metropolitan City has seized goods from 400 vendors 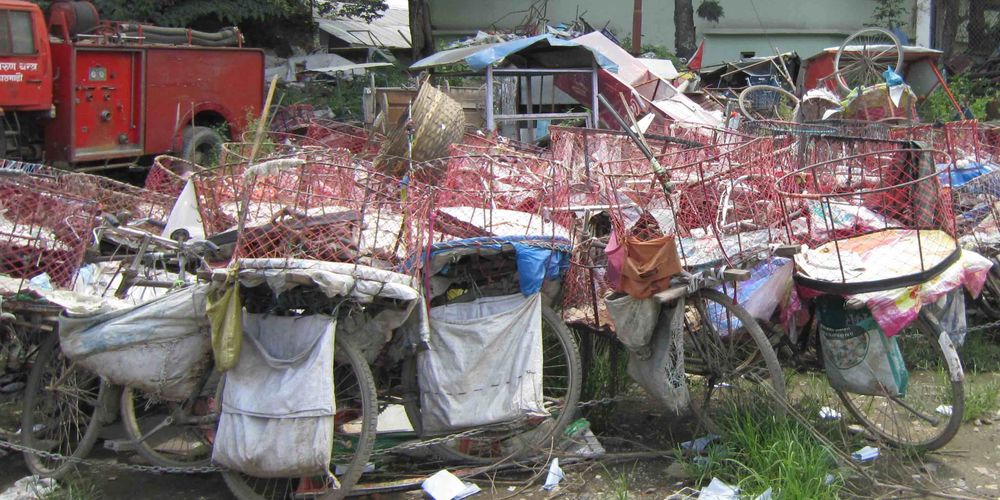 Customized bicycles used by fruit hawkers and food carts are carelessly pushed away in two adjacent corners of the tin-walled compound of Kathmandu Metro Police’s field office in Teku. Every other hour, empty trucks roll out of the compound and come back with goods confiscated from street vendors. The air is charged with the barking of caged, rabid dogs in the premises.

It's late in the afternoon and Budhi Bahadur Tamang has spent the entire day courting members of the Police squad there to have his goods returned. For Tamang who came back to Nepal with little savings after two years at a car wash in Saudi Arabia, street vending has provided a livable income for him and his family.

But to the city government and police, he is a nuisance.

“The street vendors are free loaders. They buy the goods in credit, make profit, escape tax, cause accidents in the streets, and spoil the beauty of our city,” accuses Bishnu Prasad Joshi, Division Chief of Kathmandu Metro Police. “They want to escape the physical labor of farming in villages and are  lured  by the luxury of the city.”

Other than prolonged exposure to dust and smog and limited access to bathrooms, Tamang, along with several other vendors  report  having suffered verbal harassment from various people including the traffic personnel, the Metro Police, and customers who are quick with derogatory language -- especially if the hawker is a Madhesi. In the six years since Tamang has stationed himself selling clothes in Ratnapark, the city’s center, he has made many trip to the the Metro Police station after his goods were seized.

In late May, when he went to Teku to pay a fine and  have his goods returned, he learned of Kathmandu Metropolitan City (KMC) new by-law that permits permanent seizure. The new by-law was  announced through a notice published in a national daily on May 18.

Before the by-law came into effect, KMC was  penalizing  vendors between Rs 100 to  Rs 1,5000 in fines, depending on the valuation of the goods. According to Joshi, this new by-law is a step forward in the 25 years of KMC’s attempt to end the  illegal occupation of public spaces by hawkers and vendors.

Records at the Metro Police’s field office show that goods from almost 400 vendors have already been seized. “This record shows only those vendors that have come and identified their belongings,” says Lila Raj Magar, Inspector and head of Teku operations.

Alongside the plan to permanently confiscate all materials seized from vendors, which will be auctioned off, Joshi explains that there will be a separate operation running from the compounds of Rastriya Sabha Griha in Bhrikutimandup to monitor major streets using CCTV cameras. Furthermore, the Metro Police is set to reinstate its barrack in Teku, enabling the office to control hawking during non-office hours, and prevent or remove squatters from public land. KMC has also been confiscating goods from rent-paying shopkeepers who extend their shops onto the streets. However, these goods are returned after the shopkeepers are issued a warning.

Since the by-law came into practice, desperate vendors like Tamang court Metro Police officials in Teku during the day, and having bribed them, are able to take their belongings after dark. As the Metro Police has not created  an inventory of confiscated goods, it is difficult to track items that have been seized, further allowing the office an escape from any allegations of extortion or corruption.

“I know that I will have to come and bribe the police again,” Tamang says, “I have a family to take care of. I am desperate. What choice do I have? ”

The public notice issued by KMC warns vendors of all trades  to end their business or face seizure, although the Metro Police has always made an exception for vendors selling prayer materials in pavements near temples.

“We overlook the issue because it is an essential service. We let them continue their practice  for humanitarian reasons, manabta ko karan le chod deko ho,” says Mahendra Mahato, an inspector with the Metro Police, echoing the sentiments of many other Metro Police officials.

Joshi explained that there is a plan to relocate vendors in temples after the office achieves its goal to end all other public vending practices. KMC, however, does not have any intention of relocating other displaced vendors.

This new by-law goes against  Article 6 and 7 of the International Covenant on Economic, Social and Cultural Rights (ICESCR), a multilateral treaty adopted by the UN, and  ratified by Nepal in 1991, that protects the rights of street vendors. The Committee  on Economic, Social and Cultural Rights (CESCR) that oversees the covenant states “the right of access to employment, especially for disadvantaged and marginalized individuals and groups, permitting them to live a life of dignity” as a core state obligation. The by-law also brings into question if the fundamental rights guaranteed by Nepal’s  constitution, such as rights relating  to property and freedom to practice any profession, applies to street hawkers.

“KMC is only responsible for citizens of Kathmandu,” Joshi claims, “If these vendors have been displaced and desperate, they need to seek help from the local authority of the district they come from.”

Joshi emphasizes the idea that removing street vendors will ease the pedestrian traffic and prevent accidents. He adds the removals compliment KMC’s effort to build parks in several locations in Kathmandu.

“The park along the river in Sankhamul is one that has made most progress," Joshi asks "When  you go for your evening stroll, would you really want a vendor or a squatter to block your way?"

“Drive them back to their villages”

Bishnu Prasad Joshi either dismisses the plight of vendors or counters that "desperation is not an excuse to break the law." On the other hand, vendors such as Shree Rajendra Ram, who have  been cobbling shoes in the streets of Kathmandu for the past 35 years lament  that “a hungry stomach does not understand the law.”

Between these contradicting claims lies the question of the role and rights of street vendors in urban areas. A study done by  International Labour Organization (ILO) in 2004,  estimates that 70 percent of Nepal’s economic activity comes from the informal sector. The study also found that the informal economy is concentrated in urban centers.

“We have seen an increase in the number of hawkers after the earthquake,” Joshi says, “These people have overstayed in Kathmandu and this new by-law has been enacted to drive them back to their villages.”

As he prepares to leave for a meeting with other KMC officials to discuss new routes for patrolling, he shows a letter addressed to the Traffic Police he wrote proposing that street vendors be allowed to operate in specific hours.

“There is  also not enough room in the city to license the vendors," he says, "there is no option but to seize their business. They have to return to their villages.”

Some street vendors have in fact started to leave Kathmandu. Ram Magar, who sells coins, bottled water and tobacco in the Tempo station at Sundhara, is soon heading back to Kavre, his birth place.

“My parents did not understand the value of education so I suffered,” Magar reflected, “I struggled and my sons have become teachers. My work made that possible.”

The failures of neoliberalism