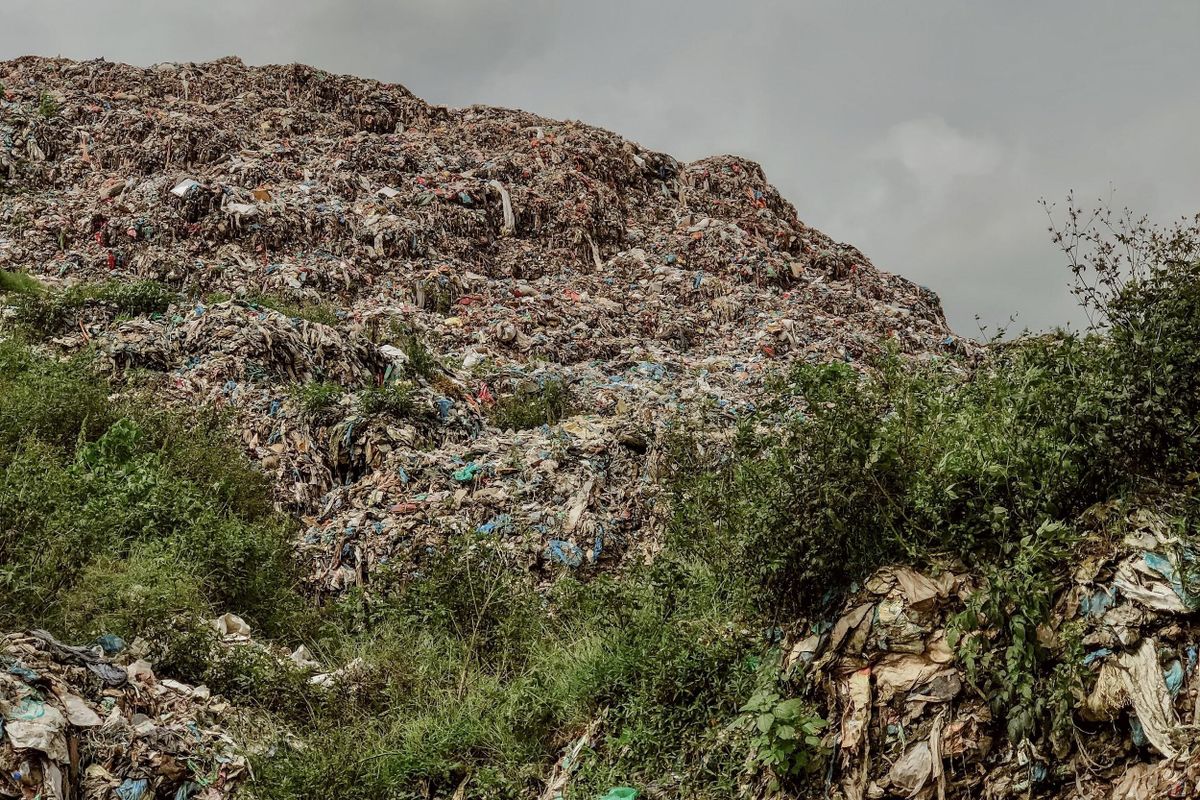 Every day, the road to Sisdole is lined with hundreds of trucks loaded with garbage. By the side of the road stand bulldozers to help clear the road of landslides and pull out trucks stuck in the mud. Even before you get to Sisdole, the air is ripe with the stench of rot. Then, you come upon the landfill and it is a mountain of trash -- mostly decaying household waste and all manner of plastic.

In the Nuwakot villages surrounding the Sisdole landfill site, the stench is unbearable and there are flies everywhere. An entire hill has been engulfed by garbage. Eagles and vultures can be seen circling the hill scavenging for food amid tons of waste. Rivers of sludge water flow downstream from the landfill and into the rivers, farmlands, and roads.

An estimated 1,200 tons of waste from the Kathmandu Valley and Banepa are dumped in the landfill everyday.

“This mountain of garbage belongs to the people of the Kathmandu Valley, but we are the ones living in this stench. Our lands are filled with garbage and our village is infested with flies,” said 46-year-old Balram Bhujel, a local of Chalitar village in Seudeni which lies right beside the Sisdole dumping site. “Isn't this the nation's trash? Aren't we also citizens of this nation?”

Every few years, Sisdole makes national news, not because of the suffering of the area’s people but because garbage collection stops in the Kathmandu Valley. Two weeks ago, on August 22nd, area locals once again blockaded the road leading to Sisdole, asking that their demands be met. A 70-year-old woman from nearby Kagatigaun had died from cholera, sparking a five-day protest. Locals believe that she contracted cholera by drinking from a stream that had been contaminated by the landfill.

The death of the woman was only the immediate cause for the protest. Locals have long been demanding restitution for their suffering. People living near Sisdole were promised employment opportunities, healthcare, other infrastructure, and community development as compensation for the landfill. Nothing has ever materialized, leading locals to stage periodic protests. Little comes of these protests, except for more assurances from the government that are rarely implemented.

“We were promised Singapore, but our villages have turned into ‘Jhingapur’,” said 56-year-old Thakur Ghimire, a Tallo Seudeni local and ward member of Kakani-2.

Earlier in April too, locals had blocked garbage dumping, leading the Kathmandu Metropolitan City to promise a grant of Rs 18.7 million to hire 31 teachers for primary and secondary schools and construct a 15-bed hospital in the area.

“A few teachers have started getting hired now. But we were also promised healthcare cards for free medical treatment at Bir Hospital and Teaching Hospital and a 'one household, one job' policy many years ago. The agreement was made with Rajendra Pandey, a politician from Dhading, when the dumping began in Sisdole. We have not received any such facility,” Bhujel said.

Employment opportunities too have been minimal, with only a few locals getting jobs as truck drivers.

“When the agreement was signed [in 2005], the locals were uneducated. People from outside our villages had to operate the waste management facility. Now, we have highly educated locals who are capable of managing waste. However, even if they want to work in the waste management department, there are no quotas available for our locals,” said Ghimire.

According to Ghimire, when the Sisdole landfill site came into operation in 2005, residents were told that it would only be used temporarily for two-to-three years. Dumping, however, has continued for the past 16 years.

A 2019 report in the government-owned The Rising Nepal daily was headlined “No negative impact of dumping site in Sisole area: NAST”, referring to a study conducted by the Nepal Academy of Science and Technology on the impacts of garbage dumping in Sisdole. The same report, however, enumerates numerous anecdotal evidence of the negative health and environmental impacts: “crops are tall but do not bear ears, death of cattle after drinking water from Sisdol and development of scabies and rashes when people wash their hands and feet with water flowing from that area.”

“There are two health posts with a total of 10 doctors, but all they do is prescribe paracetamol no matter what the sickness is,” Ghimire said.

Bhujel estimates that around 300 trucks arrive at Sisdole every day. Every truck is taxed between Rs 250 to 350, according to the size of the truck, Bhujel said. Kathmandu Valley citizens pay for the collection and disposal of their waste from cities. However, these taxes are not used to uplift the health and livelihood of Sisdole residents.

Ghimire and other elected local government members have approached their Members of Parliament and even the prime minister to voice their concerns but their pleas have gone unheard. The only recent benefit they received was a quick vaccination drive against the Covid-19 coronavirus. Everyone in the area is vaccinated, said Ghimire.

The government plans to move the landfill to Bancharedanda, approximately three kilometers from Sisdole. The new landfill was expected to come into operation in May but there has been little progress.

“In Banchare, three sections called valley 1, valley 2, and valley 3 have been designated for garbage dumping. But the authorities say that this dumping site is not ready,” said Ghimire. “Before dumping starts, all the locals living there need written proof and assurance from environmentalists and the prime minister that the dump in Banchare will not affect them. Without this, we locals will not allow them to dump anything there.”

Area locals say that Kathmandu only takes note of their woes when it affects them. Whenever garbage collection stops, journalists flock to Sisdole to speak to the locals. Perhaps this is why the road to Sisdole was heavily policed. I had to present my press pass to Armed Police Force personnel before being allowed to proceed to Sisdole. Bidya Sundar Shakya, Kathmandu’s mayor, is notoriously wary of any news that might make him look bad.

But for locals, their concerns are fundamental to their livelihood and health.

“This trash isn’t even ours. The locals of this village have not had a chance to live in a clean environment for over a decade. I now fear that the dumping site will expand to our farm lands,” said Bhujel. “Many media have come and gone but nothing seems to happen.”