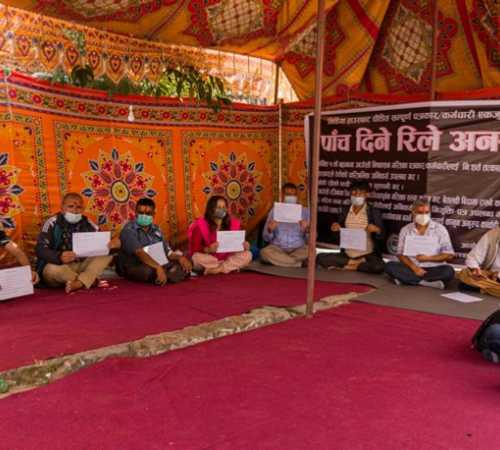 Early morning on Thursday, a group of journalists representing numerous Nepali media outlets gathered in front of the Indreni Complex in New Baneshwor. They weren’t there on a reporting assignment. Instead, they set up a tent, unravelled posters and placards from their bags, and began a relay Satyagraha to protest against the unfair treatment they’ve had to endure at the hands of their employers. Four days into the sit-in protest which has drawn hundreds more journalists, neither the government nor media houses have shown any sign that their demands will be addressed.

For months, journalists across the country have been carrying out various protests against the mass layoff of working journalists with little to no pay. Since March, when the coronavirus pandemic first affected Nepal, media houses have flushed out hundreds of journalists citing a shrink in their ad revenues. Many others have been forced to work without pay or stay on unpaid leave. Most media houses, including the largest in the country, have not paid up to six months’ salary to many of their staff members.

The violation of the rights of working journalists is not a new scenario in Nepal. Most media houses are yet to ensure a minimum wage, but cases of exploitation have become widespread since the onset of the pandemic. In fact, media houses have been using the pandemic as an excuse either to force employees to work without pay or lay off unwanted workers without any repercussions.

According to Dharmendra Kumar Karna, a journalist with Karobar daily—a newspaper run by former head of the Non-Resident Nepalis Association (NRNA) Bhawan Bhatta—around 350 reporters in Kathmandu have so far lost their jobs and as many non-editorial staff have been laid off. On July 3, the Federation of Nepali Journalists (FNJ), an umbrella organisation of working journalists in the country, staged a demonstration in Babarmahal, Kathmandu, against the arbitrary firing of journalists or forced unpaid leave put into effect by media houses. But this proved to be counterproductive as those affiliated with the federation got targeted instead.

A recent report on the impact of Covid-19 on Nepali media published by Freedom Forum shows that 3,190 active journalists out of a total of 8,410 journalists spread across 77 districts have lost their jobs due to the coronavirus pandemic. The media houses that forced staff to resign are the country's leading houses, including the likes of Kantipur Media Group, Annapurna Media Network, Nepal Republic Media, and Karobar Daily, among others.

Even before Covid-19 crippled the nation’s economy, Nepali journalists were grossly underpaid. The government has set a payscale for journalists at NRs 24,375, but media houses hardly abide by this standard. FNJ has been negotiating with media houses for years on behalf of underpaid journalists. The issue of salaries and employment security reached a new height after the first lockdown as journalists began to get laid off forcibly or were not paid for months.

At Nepal Republic Media (NRM), which publishes Nagarik and Republica dailies, reporters staged a sit-in outside the premises to protest against being laid off without prior notice or being denied their salaries for over three months. When Subid Guragain, a journalist associated with Nagarik, initiated the protest, the daily’s publisher settled Guragain’s dues, but fired him immediately after. Earlier, in June, over a dozen journalists working with Republica were forcibly laid off when they demanded their salaries that had been pending since February. Many journalists who have joined the ongoing sit-in are NRM’s unpaid staff.

Since the onset of the pandemic, Kantipur Publications, the country's biggest media house, folded three of its publications: Naari, Saptahik and Nepal Magazine. Although they have resumed Naari, the publication of the rest is still suspended. Throughout this process, scores of staff members were laid out, but only a few got severance packages.

Having been chronically exploited, the now laid-off or unpaid journalists are in a dire situation. Almost all mainstream media houses hire journalists on a contract basis, which frees them from the obligation to offer social security to their employees. In the absence of work or pay, many journalists don’t have back-up financial plans.

A 25-member joint struggle committee of journalists and private media employees, coordinated by Karna, launched a two week-long protest in the capital to highlight their plight. The committee has put forward a six-point list of demands, including the reinstatement of fired employees; assurance of minimum wages as set by the government; payment of unpaid salaries; permanent appointment of those who have worked for more than six months; implementation of working journalists’ act; an end to forced leave and transfer; and action against media houses that fail to abide by the law.

“Journalists are clearly being exploited and we have raised this issue in international forums. We will continue our fight for the rights of media persons,” said Kiran Acharya, a member of the struggle committee.

Owing to the influence that media outlets have over all kinds of powerful people, including politicians and bureaucrats, Nepali journalists seldom write news about the media’s irregularities and their exploitation of journalists. This is made evident by the fact that even as journalists have been on the fourth day of their protest, no major news outlets, barring a few online portals, have published this news.

Even as the public has shown support for the journalists, mainstream Nepali media continues to downplay the current protest as media houses have regularly been at odds with their reporters and other staff. Many outlets have garnered their reputation and earned a fortune due to the relentless efforts of their overworked and underpaid staff. At a time of crisis such as now, when their staff support, they have shown zero mercy in firing them or forcing them to go on unpaid leave.

Ruling as well as opposition party leaders, including CPN spokesperson Narayan Kaji Shrestha, Nepali Congress Party spokesperson Bishwa Prakash Sharma, have shown solidarity with the protesters, although they have done little by way of addressing their woes.

Former Prime Minister and leader of Janata Samajbadi Party Baburam Bhattarai showed up at the protest site on Saturday to express his support for the journalists. Speaking to the gathering, Bhattarai said that working journalists have been the voice of those who have been hit the hardest by the current pandemic. “It is unfortunate that you have been ignored and unpaid for the important job you do. I would like to extend my solidarity with your demands. I hope your concerns are addressed on time," Bhattarai said.

Even as most protesters wish to be reinstated, a few have signalled that they would be happy to quit if their concerned media houses come up with appropriate retirement schemes, but not before a minimum wage is ensured.

In a recent conversation, FNJ member Yam Birahi told The Record that journalists from nearly all media houses have filed complaints against their employers, mainly alleging them of not paying salaries on time.