Seasonal flooding in Kathmandu is getting worse due to various human-made factors, including climate change, haphazard development, poor urban planning, and improper drainage. 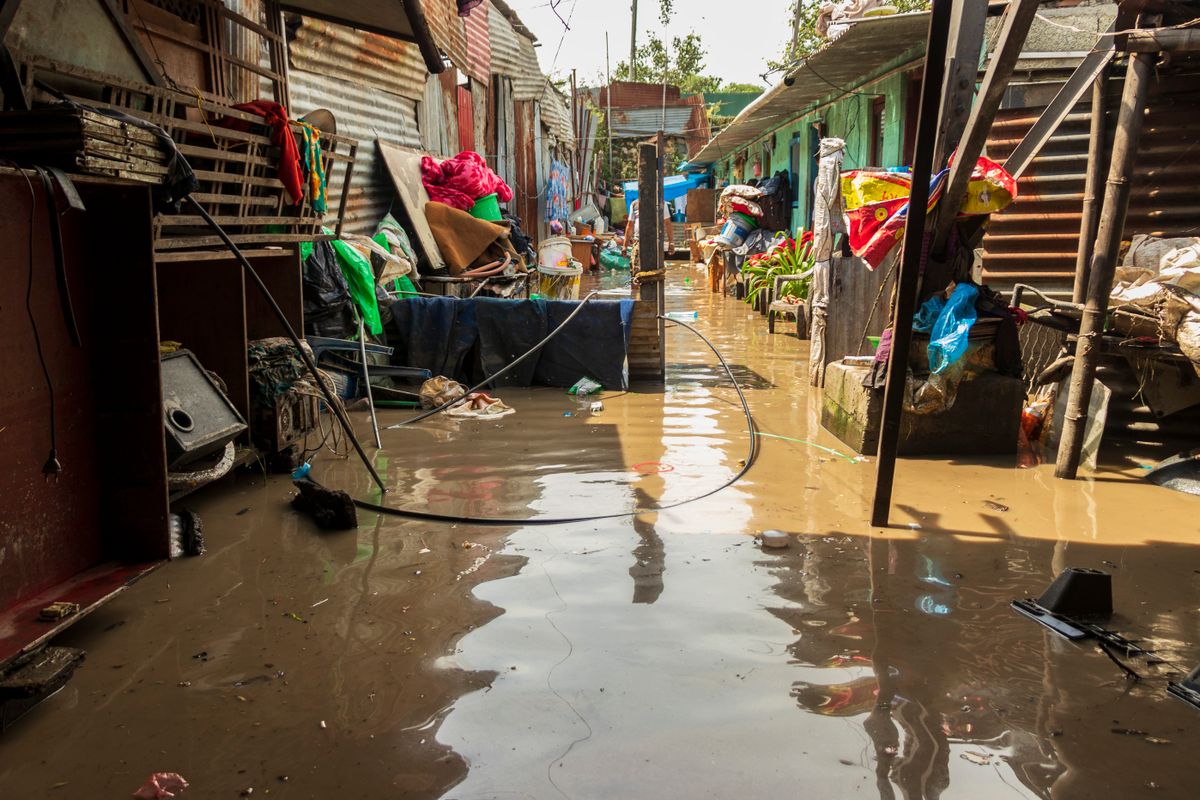 Earlier this month, on the night of September 5, many residents of the Teku area, just beside the Bagmati, were forced to evacuate their houses following flash floods triggered by heavy rains.

The valley received a record-breaking 121.5 mm of rain between 1 am and 8:45 am — an unusually high measure even for a 24-hour period. As a result, many areas were inundated within hours by spillover from the swollen Bagmati, including densely packed urban centers such as Balkhu, Balaju, Jamal, and Kuleshwor. Some victims were offered shelter from neighbors living in more flood-resilient houses, but given the prevalent fears of contracting the Covid-19 virus, many were left to salvage for whatever possessions they could protect before running off to higher ground. Meanwhile, several busy road intersection points were waterlogged all day, including Kumaripati, Tinkune, Baluwatar, and Bhadrakali.

Preliminary assessments made by the city police estimated that over 400 houses were affected, many destroyed irreversibly by water damage. On the frontlines of the disaster, as is the case every monsoon, were low-income families and residents of riverside informal settlements.

An explanation based on meteorological patterns and weather systems alone is unsatisfying for the abnormally heavy rainfall — the heaviest in eighteen years some are surmising. Large volumes of water evaporating due to high temperatures at the end of the wet monsoon cycle in the Bay of Bengal interacted with the humid local air to trigger rainfall when, simultaneously, conditions were suitable for a thunderstorm with seasonal lightning and strong winds. Heavy thunderstorms have long been associated with the end and beginning of monsoon cycles by meteorologists.

But this picture is incomplete, as heavy rainfall alone does not fully account for the unusually high flooding. There is a large, and annually worsening, anthropogenic set of factors involved here, including climate change, soil degradation, crucial design flaws in urban planning, haphazard development, and key policy failures.

Last year’s monsoon was more intense than predicted. Floods and landslides across the country claimed the lives of over 300 people. This summer was similarly marked by death and destruction caused by deluges and consequent landslides in June and July, both within and outside the Kathmandu Valley. After decades of warnings from the scientific community, international multilateral organizations, and climate change activists around the world, it would appear that the prophesized cascade of extreme weather events, each compounding to further intensify the next, is here.

The mechanism is quite intuitive. The global warming of the atmosphere creates conditions wherein the air can hold high volumes of moisture, sucking up air from water bodies and causing drier conditions. This is why climate change is, outside of rising sea levels, most commonly associated with droughts, desertification, and poor harvests caused by soil aridity. High atmospheric moisture has a direct proportional effect on rainfall intensity. Climate change thus causes both longer periods of dryness, which weaken the soil, and shorter periods of intense rainfall, which then break up the compromised soil, causing the cycle to compound in severity each season.

Nepal, despite being one of the most vulnerable countries in the world to the threats of the climate crisis, is itself a negligible emitter of carbon emissions, accounting for about 0.02 percent of the global share. Just last month, the United Nations’ Intergovernmental Panel on Climate Change released a landmark new report warning South Asian nations about inevitable increases in measures of precipitation and extreme weather events. Blaming the recent episodes of flooding on weather systems and climate change alone is thus often cited, but ultimately unproductive.

The deluges from this month, not unlike other notable monsoon floods from previous years, have exposed a number of policy failures and design flaws in urban planning — particularly in relation to haphazard development practices and encroachment of rivers.

Despite Kathmandu’s aforementioned vulnerability to more intense floods in the future, officials have seemingly elected to turn a blind eye to the science, and instead invest in — or at the very least, allow — ill-advised housing projects, further impounding riverbeds. Recent reports also suggest that the chaotic model of Kathmandu’s unplanned construction clearances is being replicated in other emerging urban areas.

With increase in demand for affordable housing, areas surrounding riverbeds have been cleared for construction haphazardly, encroaching on the width space of rivers and further worsening riverside drainage mechanisms, causing more intense floods every season. On the other hand, the authorities’ disregard for the housing concerns of informal settlement squatters, many of whom reside near the Bagmati and Bishnumati rivers, has been described as a policy vacuum, putting hundreds of lives at risk.

Essentially, the city is built with little to no regard to the natural topography of the region, severely lacking a holistic vision of development. Flooding, waterlogging, and sewage backflow have also become more common in Bhaktapur and Lalitpur in the past decade.
With cases of river encroachment rising every year, new land is regularly treated with concrete and asphalt, entirely blocking natural drainage and chemically preventing water from seeping into the ground. Over time, rivers such as the Bagmati, historically said to be ‘always shallow’, have become constricted into narrow channels that swell up during periods of heavy rainfall and can no longer meander off course to ease surges inflow.

Looking forward, fixing the valley’s injured hydrology appears to be a long, expensive, and challenging project on its own. The fact that it is not underway yet is discouraging, as is the likely sharp rise in floods in the coming years due to climate change.

Experts have cited the urgent need for reliable monitoring mechanisms, better recordkeeping practices, resilient disaster preparedness policies, and an overhaul of urban planning priorities as good places to start. These actions would not only contribute to the effort of improving seasonal flood response systems, but would also offer several off-season benefits such as a more organized city layout, fewer landslides, higher availability of water-resources, more open spaces, and less riverside construction pollution.