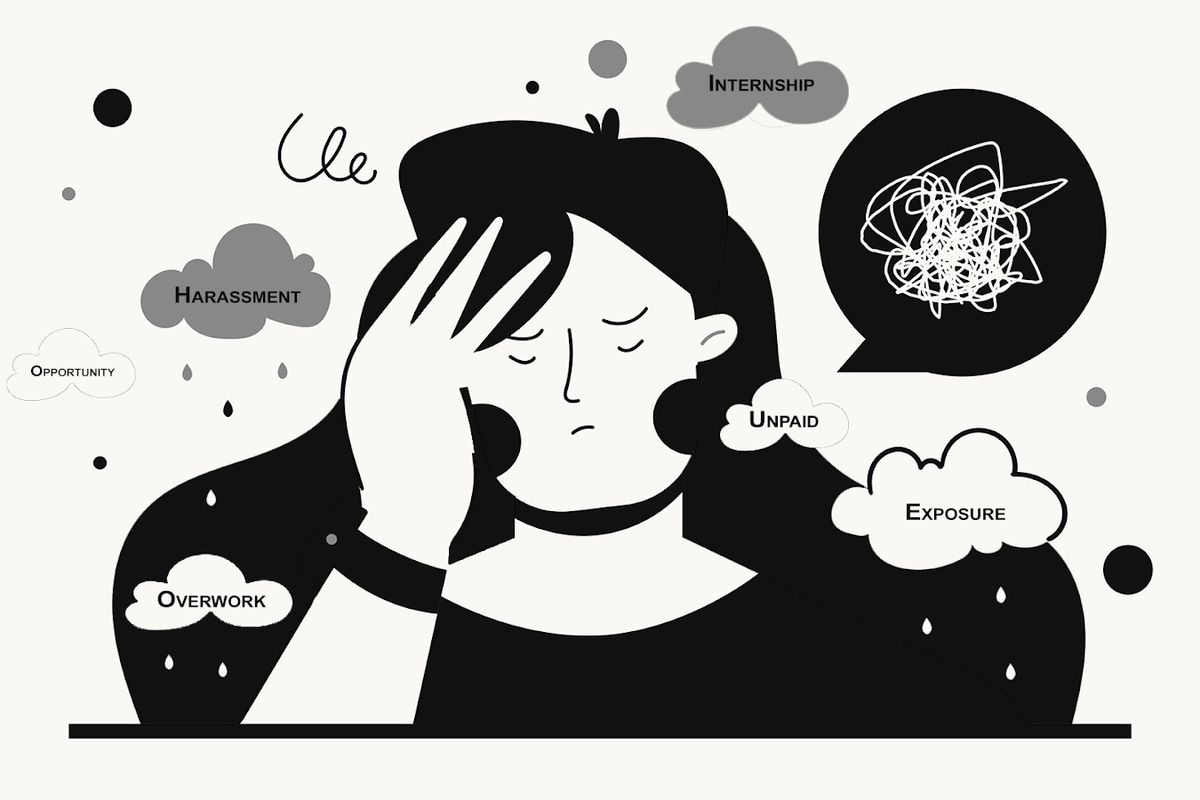 Until a few months ago, Alina Shakya was a marketing executive at one of Nepal’s leading five-star hotels. One afternoon, at a promotional event at the hotel bar, Shakya was taking pictures for the hotel’s social media page. When her boss joined the event, she went over to show him the photos. Suddenly, she says, he put his hands on her buttocks. She quickly distanced herself and yelled that he had no right to touch her like that.

“When I confronted him, he simply said that his hands might’ve mistakenly flown there because of his jovial nature,” said 24-year-old Shakya.

She complained to the hotel management, which conducted its own investigation. The perpetrator was found guilty and handed a two-week suspension. But Shakya wasn’t satisfied.

“It was an injustice given that the person had a history of complaints from trainees working in the same organization,” she said. “The management tried to convince me to shift my department to under the general manager, but I just couldn’t do it.”

Shakya resigned from her job, unwilling to work for an organization that continues to employ a sexual harasser.

“I chose my dignity over my career,” said Shakya.

For many young people starting out in their first jobs, experiences like Shakya’s are all too common. When entering the labor market as a young person, you often have to encounter exploitation, mental torment, and harassment in the name of opportunity and exposure, say a number of young people who spoke to The Record. The only way to deal with these kinds of experiences is to know your rights and watch out for red flags, they say.

Shakya’s experiences with sexual harassment are no doubt echoed by many young women but there are other, less obvious forms of harassment that are often treated as par the course while working.

Twenty-four-year-old Moon Shrestha reported traumatic mental harassment at a non-profit organization where she interned as an assistant program coordinator.

“My two colleagues and I were overworked, underpaid, rudely addressed, and severely mistreated during our internship,” said Shrestha, who, along with her two colleagues, has since resigned due to excessive mental stress.

The organization that Shrestha worked for conducted awareness programs on menstrual health and campaigned against women's violence, all the while mistreating their employees and placing them under undue stress. They were directed by a Spanish woman who wasn’t transparent about their organizational framework and was very rude towards Shrestha and her colleagues, she said.

“While we were doing our tasks, she would give us additional tasks outside of our project and later would criticize us for failing to complete our work on time,” said Shrestha, currently a master’s student at Kathmandu University. “The workload, which started from early morning and continued till late at night, was extreme for interns. It even led to our education and relationships suffering.”

When she told the director that she would not continue to work with the organization after the internship, she was convinced to sign a one-year contract with the promise of better work culture. Only, that never happened.

“Our salary was only increased to Rs 15,000 from Rs 10,000 post-internship, which was much too little for the workload we were handling,” Shrestha said.

A warning was issued to the director by the organization after Shrestha and others filed a complaint with the management. Since then, Shrestha says she’s been on an extended break from any sort of work due to the mental harassment she suffered.

“I looked into taking legal action but I wasn’t even given a signed copy of my contract making it difficult to follow through,” she said.

Asking for proper work contracts and documentation is something that all new employees should do in order to stay legally protected, according to Prapoosa KC, a human rights lawyer.

“If an organization doesn’t provide a contract to the employees before starting work, then employees shouldn’t work at that organization,” said KC.

In case of any issues, employees need to first approach the management, which must conduct an investigation within a specified time frame. If the terms of the contract have been violated, they can take their issue to the labor court, said KC. There are legal instruments that safeguard the rights of workers, like the Labour Act and the Sexual harassment at the Workplace (Prevention) Act. In case of any issues with the workplace that the management does not address, like exploitation, underpayment or nonpayment, or harassment, KC advises consulting pro bono lawyers through the Nepal Bar Association which has a team of lawyers that can provide free legal advice.

“Even if you are someone who doesn’t have paperwork, if your fundamental human rights have been violated then you can take the case directly to the courts,” said KC. “Exploitation occurs when employees are not paid a minimum remuneration of Rs 15,000. Discrimination based on sex, caste, language, or similar grounds is also considered illegal in accordance with the constitution of Nepal.”

But all too often, exploitation is not immediately obvious. Young people just starting out in their first jobs can be unaware of their rights and what is considered fair remuneration or decent work hours. Employers also tend to pile on responsibilities once the hiring process is complete, and if employees refuse to take on more than they are mandated to in the contract, they are fired.

Riya Shrestha had her contract with an educational institution revoked after just two days of being hired as a program coordinator and marketing teacher for grade 11 students.

“They did this because they wanted me to do more tasks than I was hired to do,” said 23-year-old Shrestha. “No matter how many times I reminded them to give me a contract, they didn't give me one for seven months.”

She finally received her contract but was let go when she refused to go beyond her brief.

According to Shrestha, she was also paid less than a male employee who worked in the same position as her.

“Even though I worked more than him, they would argue that I wasn’t a graduate yet so they wouldn’t pay me more,” Shrestha said.

The Record interviewed many youths, almost all of whom reported similar experiences. While some were afraid of publishing their stories, others shared their experiences anonymously.

“I was promised Rs 10,000 for a month of freelance work as a content designer for an organization that repurposed solid waste into consumer products,” said 21-year-old U, who asked that her identity be kept confidential as she feared reprisal from the organization.

She prepared banners, posters, and brochures but once the work was complete, they only paid her Rs 2,500 on the grounds that “designing is very easy, we would’ve done it ourselves but we don’t have the time.”

When U confronted her employer, she was told to be grateful for the exposure and networking opportunity.

“But exposure doesn't pay the bills,” U told The Record.

Businesses, both large and small, often behave as if they are doing their employees a favor by hiring them, said many young people. When young employees ask for their dues, they, like U, are told to be grateful for the opportunity to work. Young people are expected to work long hours for little remuneration simply because they are young and starting out.

K, who also asked her identity be protected, reported similar experiences working for an education company in Gyaneshwor when she first started working in her early 20s.

“In the initial months, the work culture was good with a strong sense of teamwork, encouragement, and a no hierarchy policy where everyone addressed each other casually as ‘timi’,” said K.

But as time went on, she began to see the exploitative side of the organization. The CEO of the company expected K and her colleagues to work for more than nine hours a day. She was often sent patronizing messages telling her that the company was “helping her grow”.

The Labour Act, under sections 16 and 19, specifically states that no worker shall be engaged in work for more than eight hours a day, or 48 hours a week; any work over this time frame is considered overtime and must be remunerated at a rate of 150 percent of the usual remuneration rate. However, very few organizations in Nepal abide by the law. In fact, working long hours for no overtime pay is encouraged by management as a sign of the employee’s dedication to their job.

“Employees were made to feel guilty for leaving after 5 pm and confronted about it by their supervisor. Even after work ended, people were expected to stay in the office and hang out,” said K.

The Covid-19 pandemic exposed many predatory work practices and how disposable workers were to their employers, leading countries like Portugal to come up with new labor laws that make it illegal for employers to contact employees outside office hours. In Nepal, thousands of employees lost their jobs, sometimes without even receiving the salaries they were due. Journalists had to go on strike demanding that they be paid their dues, even as media company owners continued to make money. It is ironic that in a country that has committed to socialism in its constitution, Nepali companies have adopted the hypercapitalist practices of overworking employees and paying them a pittance while upper management, owners, and CEOs make millions.

These issues are not limited to young people – even seasoned workers get exploited – but the youth are especially prone to being victimized as they lack experience in the workplace.

“Young people are so eager early in their careers that they become submissive,” said K. “Even in an open work environment, confronting an employer is not an easy task, especially because employees are often led to feel replaceable and expendable.”

Riya Shrestha too believes that young people get exploited because they are conditioned from an early age to be patient and tolerate unfairness from employers. Additionally, Nepali culture demands that young people respect people older than them, regardless of the issue at hand. In workplace settings, youths are thus often made to feel like they are disrespecting others if they call out their behavior or even question them. It is not uncommon for older colleagues in the workplace to refer to younger employees by patronizing terms such as 'nanu' or 'keta-keti'.

U believes that these kinds of instances will continue unless youths themselves are fully aware of their rights.

“It is necessary to spread awareness about workplace exploitation and also learn to clearly communicate and set boundaries in the work environment,” said U.

But if the worse comes to pass, employees should not hesitate to take to the courts to fight for their rights. Exploitation will not end unless employees themselves start to hold employers accountable. According to KC, some employees have been bold enough to file lawsuits against mistreatment from private organizations.

“It is important to fight back against injustice in the workplace,” she said.

Why victims of Nepal's civil war may not get justice