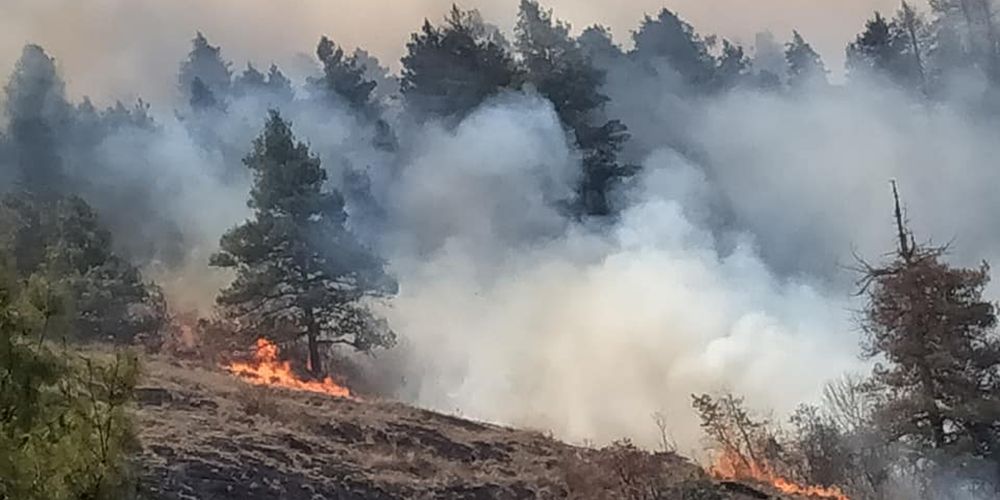 Environmental issues, most notably air pollution, have featured prominently and consistently in the Nepali media right through the first quarter of 2021. Despite the ongoing global pandemic, its sagas of new strains and vaccine delivery issues, tensions between rival governing factions, the political balancing act between our neighboring giants, human rights crises faced by migrant citizens abroad, and the theater that followed Prime Minister’s KP Sharma Oli’s unsuccessful dissolution of Parliament, early 2021 will perhaps be best remembered for its environmental crises, including record wildfires.

Pictures of Himalayan peaks devoid of snow had already begun circulating on social media by mid-December 2020 and experts forecasted a difficult wildfire season early on. While dry winter conditions and a lack of rain were cited as the primary triggers for the forest fires, local government authorities in various areas have also reported instances of stubble burning on agricultural land adjoining forest areas triggering fires that grew uncontrollable, as early as November 2020.

Wildfires in the district of Manang were already raging for two whole months by January. The fires eventually spread into the Marsyangdi and Dudh Khola valleys, triggering dozens of other smaller blazes along the way. As the flames grew closer to the Kathmandu Valley, especially after spreading to the district of Lamjung, the capital’s air quality saw a significant drop – signaling the first of many instances of air quality reaching hazardous levels in 2021. By the second week of January, parts of Kathmandu had ranked first on lists of the world’s most polluted cities. The air quality index (AQI) deteriorated well beyond hazardous levels, reaching 500 on January 5.

Atmospheric conditions trapping smoke within the valley bowl changed by late January, temporarily clearing the air. However, the wildfires that caused much of the smoke in the first place showed no signs of stopping. Thousands of wildfires have since started, indiscriminately crossing geographical and political borders. AQI measures once again rose sharply in late-March, reaching a peak of over 600 in Kathmandu, shrouding several urban and urban-adjacent areas across the country in smoke.

Pictures of orange skies with a hazy sun dominated social media feeds and  schools were temporarily closed due to the pollution, after many months of pandemic-induced disruptions. No national plans to mitigate the wildfires have been announced yet. With no practical ground or aerial extinguishing solutions currently available at the required scale, it appears as if the government’s unspoken position is to just wait out the storm and perhaps pray for some rain. Even public outrage at the inaction is now beginning to feel impassive and routine.

Over 2,700 fires have been recorded so far. Thousands of hectares of forest are estimated to have burned down, although no official figures are available as of writing.

Naturally occurring wildfires are common, important processes through which growth and replenishment are mechanized in cycles. They also clear out dead leaves, along with various weeds and undesirable vegetation that can be detrimental to soil health, preparing the forest ground for new seasonal plants to grow while returning nutrients to the soil. However, such natural systems are delicately balanced and generally do not respond well to unnatural disruptions. Human-produced greenhouse gas emissions have direct links to many of the underlying variables that dictate the frequency and intensity of wildfires, disturbing the equilibria of these fire cycles.

The causal connection between climate change and wildfires is rather intuitive, if not obvious. Higher temperatures cause soil to dry, remove moisture from dead leaves, and melt snow earlier in the year – all of which directly cause more intense, and sometimes more frequent, wildfires. Additionally, unusual patterns in seasonal rainfall, which are informed by atmospheric temperature levels, among other variables, also lead to disruptions in cycles of natural moisture stabilizing systems, causing anachronistic wildfires throughout the year. Finally, extreme weather events also contribute to meteorological disruptions, triggering more floods, landslides, dry spells, droughts, and with it, forest fires.

On the other hand, the causal chain can be traced the opposite, less intuitive way as well. Wildfires, exacerbated by climate change, themselves contribute to greenhouse gas emissions, creating a bidirectional loop of the two environmental phenomena feeding directly into one another.

We often think of trees and forests as carbon sinks. Indeed, trees are better and more efficient at capturing and offsetting atmospheric carbon released from anthropogenic emissions than any technology we have readily available at scale today. However, they are not designed to hold carbon the way modern carbon-capture tools being developed by sustainable technology groups are. In the event of wildfires, trees themselves become sources of emissions. And depending on the size, severity, and duration of the fires, they can be just as harmful to the atmosphere as any other source of greenhouse gas emissions contributing to climate change.

The European Centre for Medium-Range Weather Forecasts’ (ECMWF) Copernicus Atmospheric Monitoring Service (CAMS) recently measured volumes of carbon emitted by the wildfires this season using satellite data. The program estimates Nepal to have emitted nearly 18 megatonnes of carbon in the past month alone, a record since March 2016 when emissions reached 27 mega-tonnes. The Indian state of Uttarakhand, Nepal’s neighbor to the west, was estimated by the same program to have emitted around 0.2 megatonnes of carbon.

Perhaps unsurprisingly, national media outlets have reported on the air pollution problem, obvious by sight, smell, and breathing ease, with noticeably higher urgency and priority than the relatively distant and remote fires. Experts have long stated that vehicular emissions, industrial pollution (particularly smoke from large factories), and practices such as open-air trash burning are generally far worse for the air than wildfires. While the 2021 fires are unprecedented in recent memory, and have thus contributed an abnormally large proportion to the pollution observed this year, Kathmandu’s most pressing air-quality problems are still human caused.

Still, the 2021 fires show how unprepared Nepal is for such occurrences in the future. The relief communicated by those claiming this season to be an anomaly may be yet unearned, as wildfires are becoming increasingly common the world over. The fact that Nepal is not able to effectively counter the fires at the required scale as the planet moves to warmer temperatures and drier conditions is certainly not an optimistic indication of what future wildfire seasons might look like. If 2021 does not inform a government-endorsed push to create more sustainable and resilient infrastructure to tackle wildfires in the future, winters like the one Nepal is now emerging out of may become more common in the decades to come.