An ingenious, must-see documentary about the trauma of Indonesia’s bloody campaign against the communists 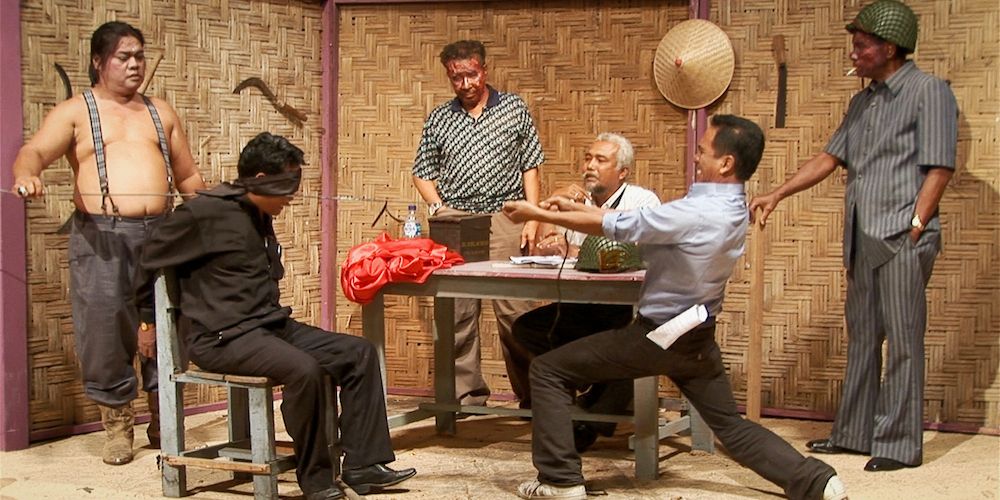 More often than not a work of art is defined by its beauty. Yet it is the rare masterpiece that is defined by a quality of truth, often ugly and dark, that is unmistakable but unacknowledged. It is in this camp that The Act of Killing, a film by Joshua Oppenheimer, falls. In decades to come it will be remembered as one of the most brilliant documentaries of the twenty-first century. In fact, as true film lovers will agree, The Act of Killing further proved its genius this year by not winning an Oscar.

The film is unconventional, not a collection of interviews interspersed with well-researched voice-overs presented in serious tones that are the staple of most documentaries. There’s no narrator. As far as storytelling goes, it stands out for its innovative use of the theatrical frame to question what is normal, everyday, and ordinary in Madan, Northern Sumatra and Indonesia.

The film follows a group of gangsters who were hired by the Indonesian military to exterminate the nation’s communists in the mid–1960s—a period in world history called, without irony, “the Cold War,” despite the fact that from the Congo to Indonesia (not to mention Vietnam) the war was bloody hot for millions of people. In 1965, after an aborted coup that was blamed on the Indonesian Communist Party, the new military leadership led by Suharto carried out genocide, killing in a mere six months between 500,000 and one million communist party members and “sympathizers”—artists, trade unionists, teachers, and land rights advocates. The role of the United States and the United Kingdom in helping with the genocide is suspect, with allegations that the US embassy handed over a list of communists to be killed. Since screening the documentary for US legislators, Oppenheimer has demanded that the US acknowledge its role in the killings.

The killers, the military, and the gangsters were never tried for any of the murders. A “New Order” was established in Indonesia that lasted until almost a decade after the Cold War was over. Suharto was overthrown in 1998, but the same gangsters still rule. They intimidate, they extort, and their leaders and supporters—including people in the high circles of politics and business—extol the virtues of being a gangster. The Bahasa word preman, which the film’s protagonists are fond of repeating, is derived from the English free men.

“We need gangsters to get things done. Use your muscles! Muscles aren’t for beating up people, although beating up people is sometimes needed,” says Indonesia’s vice president, addressing the paramilitary group Pancasila Youth that played a key role in mass killings. Big businessmen praise the gangsters for helping them get valuable property for cheap.

The power of the film comes from the contradiction between the immorality of the protagonists’ actions in the viewers mind and the willingness of the perpetrators to brag about and re-enact the killings, one horrible still frame after another, because they have convinced themselves they did nothing wrong. One protagonist, a colorfully dressed man called Anwar Congo, thinks he looks like the Hollywood actor Sydney Poitier. He has strangled about a thousand people using techniques he learned from Hollywood gangster movies, he proudly reports. Together with his sidekicks he re-enacts the murder scenes in front of the camera, convinced that they are the heroes, or at least the victorious party.

As the film progresses, it starts to dawn on Anwar and his sidekicks that perhaps things are not as black and white as they thought.

“Listen, if we succeed in making this film it will disprove all the propaganda about the communists being cruel. And show that we were cruel!” says Adi, a fellow gangster. He is not worried about the law, however. “It’s not a problem for us,” he says, “It’s a problem for history. The whole story will be reversed.”

“But why should we always hide history if that’s the truth?” replies Herman, a corpulent gangster who is dressed as a woman in grotesque costuming.

Adi replies that not everything that is true should be made public. “I believe even God has secrets,” he says. Later he justifies his actions as part of a war.

As the re-enactments grow more elaborate, the occasional spasms of doubt become stronger. In the scene of a village massacre, one gangster exhorts his butchers:

“Kill the communists! Take no prisoners! Exterminate them to their roots! Chop off their heads! Burn them! Kill them all! Kill! Kill!”

The scene is so vivid the deputy minister of youth and sports, who is there to cheer the gangsters, worries that it will give a bad image to the Pancasila Youth, although he admits they are capable of greater cruelty. “We must kill the communists,” he says, “We must exterminate them, but in a more humane way.” Even Anwar Congo, the leader of the massacre, and the director of the scene, appears disturbed. Family members of the gangsters, who have assembled to be in the film, look on, terrified. Despite the horrors, brought to life by vivid re-enactments, the film ends on a surprising note, somehow restoring faith in humanity with a grotesque and powerful scene.

Oppenheimer spent eight years making the movie and shot 1,200 hours of footage. Many of the credits at the end of the documentary remain anonymous, reminding viewers of the risks they have taken to expose the gangsters. The director has called the documentary his gift to Indonesia. No country could ask for a better gift from a documentary artist.

Cover photo: A torture scene from “The Act of Killing.”

“Soul Sister” stars Namrataa Shrestha from beyond the grave

An ingenious, must-see documentary about the trauma of Indonesia’s bloody campaign against the communists

A familiar tale, told a new

In Suntali, director Bhaskar Dhungana chooses simplicity as his artistic vehicle for exploring the profound subtleties of life.