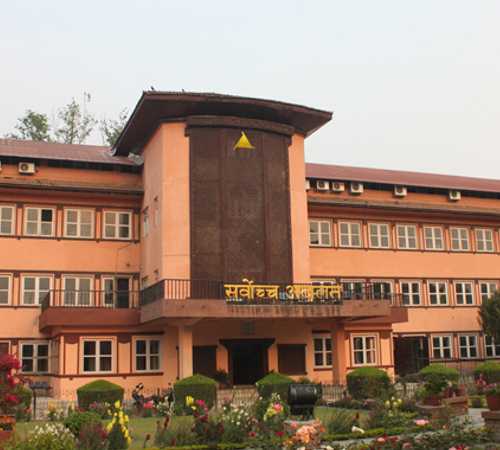 The Supreme Court has barred senior ruling leader Bam Dev Gautam from taking up additional responsibility as a minister and put a stay order on his appointment to the Upper House. The fate of his Upper House nomination will be determined during the final hearing on the issue, which is scheduled for September 30.

The apex court’s interim order comes a week after Gautam had taken the oath of office and secrecy following his nomination, by President Bidya Devi Bhandari, to the Upper House. Gautam, who was defeated by Nepali Congress leader Sanjya Gautam in 2017’s parliamentary elections from Bardiya-1, was desperate to return to power.

Earlier, Gautam had intended to contest the by-election from that constituency, on the assumption that he could emerge a winner, get into parliamentary politics, and thereafter vie for the prime ministerial seat. But the several attempts he made to get elected to the House of Representatives (HoR) ended in failure, for a couple of reasons: for one, Prime Minister KP Sharma Oli was reluctant to bring him into parliament; and two, poll-winning party leaders refused to vacate their constituency, which would have set the stage for the by-elections.

Upon failing to make his comeback into the HoR, Gautam had extensively lobbied to amend the Constitution to allow for Upper House members too to become a minister or prime minister. But he failed in that bid because the majority of his party’s leaders turned down his proposal. According to the Constitution, only HoR members are allowed to run the ministries.

But then his luck changed--when PM Oli, who is also the Nepal Communist Party’s (NCP) chief, found himself floundering within his own party, and thus agreed to name Gautam to the Upper House. Gautam’s appointment bolstered Oli’s position in the Secretariat, the powerful nine-member body in the party, as getting Gautam on his side proved decisive in Oli’s garnering a majority. Since getting nominated as a member of the Upper House, Gautam has been demanding that he be appointed a minister in the Oli Cabinet.

PM Oli has already started the process of reshuffling his Cabinet, apparently to induct Gautam into the all-important coterie. The party’s chairs--Oli and Pushpa Kamal Dahal ‘Prachanda’--are tasked with deciding the Cabinet’s new members.

A section of leaders in the party, legal experts, and civil-society members, however, have been protesting the moves underfoot to prepare Gautam for a ministership. As part of the protest, advocate Dinesh Tripathi had filed a writ petition at the apex court, arguing that appointing a poll-loser as an Upper House member--and then further giving him a cabinet berth--contravened the Constitution’s provisions.

Responding to the writ petition, a single bench of Justice Ananda Mohan Bhattarai on Wednesday put a stay order on Gautam’s appointment to the Upper House and scuttled all possible bids that could be made to give him a cabinet berth.

Badal and Biplab turn against each other