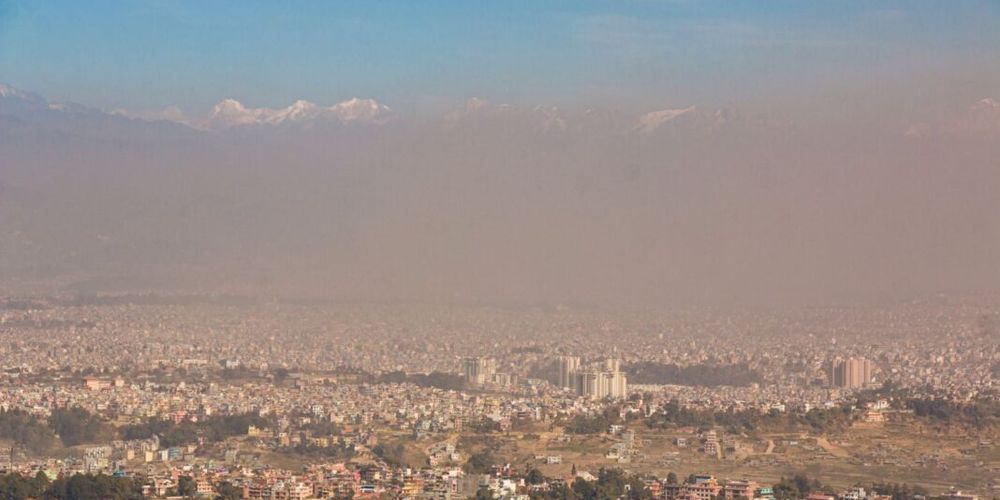 Just last week, parts of the capital observed a record-high Air Quality Index (AQI) of 600, placing Kathmandu among the ranks of the most polluted cities in the world.

Winter-time atmospheric conditions trapped pollutants under a layer of warm air and high clouds against the valley’s surface. Conditions were exacerbated further by the usual matrix of causes – vehicular emissions, garbage burning, wildfires, and industrial pollution. These conditions, along with high humidity – reacting with smoke to further decrease visibility – led to a visibly hellish hue, captured in a number of photos making the rounds on social media.

Kathmandu’s air pollution problem was, once again, at the centre of conversation in the city. Until it wasn’t.

AQI measures in certain parts of Kathmandu late last Monday exceeded 500 and persisted above the 450 threshold for another couple of days. Despite the government’s ability to declare a health emergency at AQIs above 300, which would then allow for mitigating measures such as crackdowns on garbage burning, mandates on vehicle reduction, and industry emissions cutbacks, no action was taken. In fact, whether the government is even able to mobilise its departments to make such declarations is currently unclear, given the ongoing political crisis following the prime minister’s recent dissolution of the Lower House. If the relaxation of Covid-19 preventive measures is any indication, it is perhaps safe to assume that the authorities are too distracted to take action on the air pollution front as well.

The last few decades in Nepali history have been characterised by large structural changes – radical political shifts, natural disasters, economic turmoil, public health crises, and growing social inequality. Yet, air pollution has remained one of urban Nepal’s most persistent scourges. Despite observably worsening breathing conditions, increases in respiratory illnesses (Covid-19 aside), growing public awareness, and non-stop media coverage, the nation’s air quality has continued to worsen with time. Even the fragile optimism experienced by many during the first few months of the lockdown, expressed emphatically in many a declarative social media post, has dissipated.

Climate change and air pollution are inextricably linked – as the planet becomes warmer, its air becomes dirtier. Cited by experts as one of Nepal’s key climate vulnerabilities, the increase in number and intensity of droughts directly impact air quality through dust exposure – escalating the risks of dust storms and the illnesses associated with dust inhalation. Given the dust-bowl valley’s ever-increasing number of vehicles and construction projects, dust management is likely to emerge as one of the most pressing governance challenges for decades to come.

The greenhouse gas carbon dioxide is strongly associated with cognitive decline. We have all experienced clarity in thought and improved breathing after a brisk walk outdoors following a long day of working inside. Kathmandu’s most polluted urban centres house hundreds of schools and colleges, environments designed to promote cognitive performance.

Smog (photochemical or otherwise) is also positioned to become a major problem in the coming decades. In The Uninhabitable Earth, journalist David Wallace-Wells discusses the Chinese “airpocalypse” of 2013, when peak AQIs reached 993. Scientists have suggested that, during this period, an entirely new kind of smog was inadvertently created that ultimately led to 1.37 million deaths in the country. Again, in 2017, the Indian capital of Delhi reached an AQI of an unprecedented 999, famously posited as the equivalent of smoking more than two packs of cigarettes a day.

Many of the systems, or lack thereof, that led to these dramatic recordings are present in our own understudied country as well. The Covid-19 pandemic exposed how ill-prepared we are for respiratory crises. However, respiratory illnesses only scratch the surface of what can be expected. The scope of public health damage that air pollution is capable of is so all-encompassing that it can be difficult to conceptualise. From respiratory illnesses like asthma to cancers, heart diseases, and pregnancy complications, the long-term effects of breathing polluted air are widespread. Newer studies show that the scope of air pollution’s impact has been widened further, linking air-pollution to memory degradation, autism, dementia, long-term neural systems damage, increased likelihood of psychological illnesses, and even reduced earnings and labour force participation.

There are a number of naturally occurring geographical and topographical realities that position Nepal as a region vulnerable to global anthropogenic climate change. Weak political infrastructure, various socio-economic difficulties, and poorly planned urban centres further worsen our susceptibility to extreme weather events and climate-induced displacement. One of the key global takeaways from the ongoing Covid-19 pandemic’s disruptions has been the world-wide internalisation of the importance of crisis preparedness – a major national weakness exposed by the virus.

It is thus essential that the air pollution issue be addressed as early and swiftly as possible. The solutions proposed should convey the level of urgency with regards to both temporary as well as relatively longer term time scales. In the short term, air quality can immediately be managed by reinstituting the odd/even rule for vehicles that would reduce, at least in theory, by half the volume of currently observed vehicular emissions. Worldwide Covid-19 guidelines have already normalised the use of facemasks, although regular official reminders are helpful in enforcement over time. A sharp crackdown on public garbage burning and mandated industry/factory emission caps can be also put into effect. Approaches like these, while useful in alleviating current AQI levels, are temporary by their very nature, and thus, wide-ranging structural changes need to be explored to reach permanent solutions.

One area in which Nepal shows promise is in the media’s persistent reporting on air quality, which has helped keep the issue alive in the public discourse. Open sources of air quality monitoring data, available for commercial and non-commercial use, are also a step in the right direction, as they allow the public to make informed decisions on a daily basis. They also open the doors for entrepreneurs, activists, and enthusiasts in the private sector to hold the country’s largest emitters accountable.

Clean energy should be actively promoted and encouraged at all levels -- sectoral (renewable energy sources), industrial (such as factory emission profiles), public (emissions from public transport), and individual (use of clean cooking stoves). Policymakers should think beyond national emission caps, or Paris-style nationally determined contributions (NDCs), and actively withdraw support and investment from emitters who do not follow guidelines.

Not unlike its links with various illnesses, air pollution is also linked with all other kinds of pollution and climate-damaging behaviours. Any sort of long-term solutions will risk failure if responses are not designed using a systems-wide approach. Unless swift actions are explored and exercised in the coming years, Nepal is poised to exacerbate its already high public health and climate change vulnerability.