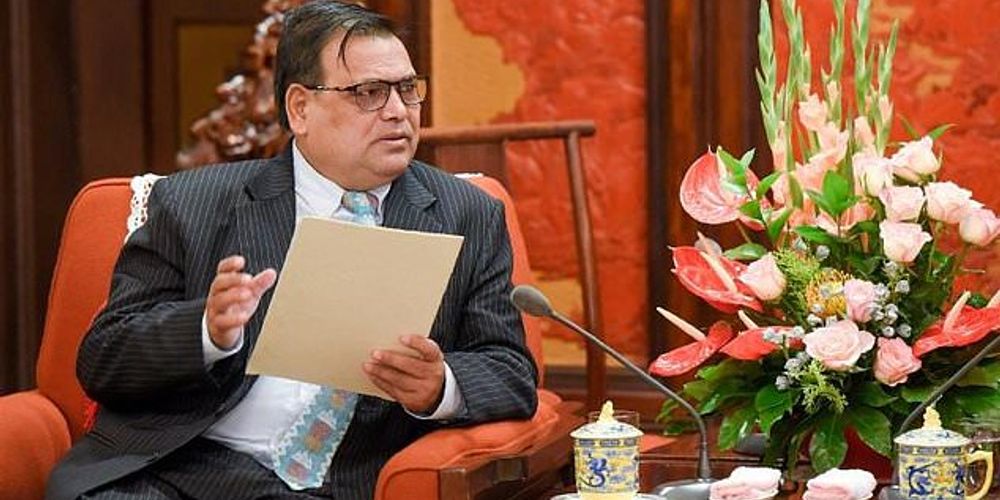 What Mahara is accused of

The Speaker of the House of Representatives, Krishna Bahadur Mahara, resigned on October 1 after a junior clerk at parliament secretariat accused him of raping her. In a letter to the Deputy Speaker, Mahara said that he was stepping down – albeit temporarily – on “moral grounds”, to pave the way for a “true, impartial and independent investigation” into the allegations.

On September 30, the online portal Hamra Kura published a detailed account [warning: violent content] from a woman who works at the parliament secretariat detailing the alleged assault. Mahara is the most senior public figure to face such allegations since former Kathmandu mayor Keshav Sthapit was accused of harassment by two women a year ago, and since the broader #metooNepal movement gained momentum.

An official at Tinkune police station confirmed that the woman, in her verbal statement to the police, said that Mahara had arrived drunk at her house the previous night, forced her to drink with him from a bottle of whisky he had brought, and then beaten before raping her. She also said that Mahara had positioned himself over time as a friend of the family. This account matches that in the Hamra Kura report.

The woman called the police soon after the incident on Sunday night. The police photographed the scene, which included what the woman said were Mahara’s broken spectacles, an insole, and the half-empty bottle of whisky. However, the investigation did not start until Tuesday, following a major outcry on social media.

Yet, rape, like murder, is a criminal offense and no formal complaint needs to be lodged for police to investigate. The Kathmandu Post reported on October 3 about how the absence of a functioning Women’s Commission impacts such cases.

Mahara’s resignation was not a foregone conclusion, and has much to do with the evolving shift in national attitudes towards sexual violence against women.

Mahara initially denied all allegations but had to resign after Prime Minister KP Sharma Oli, following consultations with the Nepal Police and party leaders, instructed him to step down and cooperate with the investigation.

Also on 1 October, a meeting of the ruling Nepal Communist Party (NC) central secretariat unanimously decided to ask Mahara to resign, to avert a possible crisis. Sources told The Record that several leaders present at the meeting pointed to the risks of widespread protests, as seen last year after the rape and murder of 13 year-old Nirmala Panta, which many believe remains unsolved as a result of a cover-up to protect influential people.

Then, in a dramatic turn of events, hours after Mahara resigned on October 1, the accuser appeared to withdraw her allegations, accusing the media of twisting and exaggerating her words to defame “a father figure”. In an interview with Nagarik Khabar, an online news portal, the woman said she had made her initial statement out of anger at Mahara when he did not grant her transfer request. She said further that Mahara had not even been to her flat that night. However, police CCTV footage shows that Mahara’s vehicles [which include a security detail] did visit the locality.

On October 3, Deputy Superintendent of Police Hobendra Bogati, spokesperson of the Metropolitan Police Range, Kathmandu, said the woman had handed in a written statement saying that there was no truth in media reports that she had been raped. She is also understood to have told the police that she has been on antidepressant medication for several years.

Before the woman retracted the allegations, her husband had defended Mahara in the media. On October 3, he posted on Facebook an agreement that seems to show the couple agreeing to end their 28 year-long marriage.

On social media, Nepalis have gone from being largely sympathetic to the accuser to being split down the middle. There is considerable speculation that the woman was pressured to change her statement, and frustration at the police for the delay in the investigation which, many worry, gave Mahara time to put pressure on the victim and her family. Commentators have the police must pursue this case, or risk discouraging others from report such cases in future. At the same time, there is a vocal segment of Nepali social media blaming the victim, speculating about her intentions and character, and naming ill-informed comments about mental health challenges.

Senior politicians have responded cautiously. “It might just be an allegation, but it’s a serious case. There should be an independent investigation into the allegations against the speaker,” Nepali Congress General Secretary Shashank Koirala said on October 1.

Bhattarai tweeted: Such cover-up of atrocious crimes like rape and murder under influence of power and money was common during old regimes. But what’s the meaning of all those sacrifices if yesterday’s revolutionaries now in government resort to similar maneuvers? The untruth and injustice can’t last with the cover of the red flag. Let everyone reflect!

Mahara’s career may no longer be bulletproof

Deputy Parliamentary Party leader of the NCP, Subash Nembang, said that although Mahara himself had signaled that he would return to his duties after the investigation, he had in fact been automatically relieved from his duties, suggesting that the resignation was not temporary.

Rojnath Pande, spokesperson of the parliament secretariat, said the House would elect a new speaker at its next session, as specified by the constitution. The summer session of parliament ended in late September; the winter session usually begins in late December.

Irrespective of how the investigation moves forward, Mahara’s resignation could be the beginning of the end of his three decade-long career, which has, until now, weathered numerous storms.

Mahara, a former headmaster from Rolpa, swiftly rose through the ranks of what was then the underground revolutionary Maoist party. He is a mentor to many now-senior Maoist members of the NCP and was part of the core group of revolutionaries who launched the People’s War, albeit as an ideologue rather than military strategist. He has been of the most trusted lieutenants of NCP co-chair Pushpa Kamal Dahal and was a core member of every negotiation between the Maoists and the state between 2001 and the signing of the Comprehensive Peace Agreement (CPA) in 2006, and the eventual dismantling of the Maoist People’s Liberation Army and integration of some of its soldiers into the Nepal Army in 2011 .

Yet his rise in mainstream politics has been controversial. In 2013, he was caught (on an illegal wiretap) asking a Chinese businessman for Rs 500 million to buy MPs ahead of one of the numerous rounds of elections for prime minister during that turbulent period. He has been accused of misusing millions of rupees paid by the government for the upkeep of former People’s Liberation Army in their temporary cantonments between early 2007 and end-2011.

Mahara has survived such incidents unscathed and kept his place in Kathmandu’s elite political club. But the rape allegations – and the mysterious developments since – come at a time when the Oli government is managing numerous crises: a prime minsiter who is erratic and listens to few, if any people; a growing sense of discontentment with the “prosperity” slogan, which feels hollow to many; innumerable corruption scandals; and a federal structure that can seem shambolic. If the government needs a scapegoat, Mahara could be it. Firing him – and making sure he stays fired –  could placate the broad swathe of Nepalis who remember the national rage about Nirmala Panta.

But as for the activists and journalists in the smaller, possibly primarily female and urban, group that remains enraged about the lack of consequences for the many public figures accused of sexual harassment in recent months, including a university professor, a theatre actor and directors, and, yes, politicians – they are unlikely to be easily placated.

Even so, without their work, and that of civil society and citizens who mobilised in support of justice for Nirmala Panta, Mahara may not have been asked to resign - at all or as quickly.

Correction: The headline of this story was changed to the current headline from 'Mahara may stay fired; but his case is unlikely to help the #metoo movement' on Friday Oct 4 at 8am.