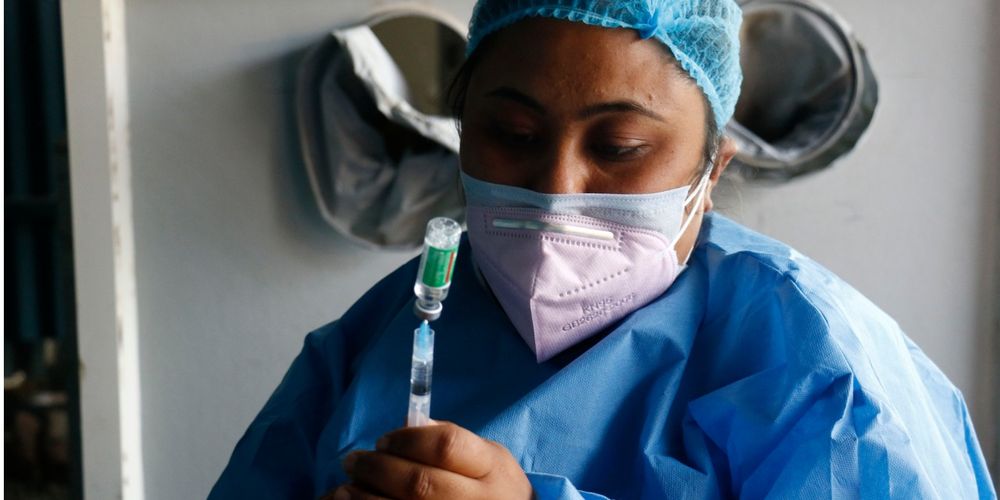 On Wednesday, at a hearing of the United States’ Senate Committee on Foreign Relations regarding the international response to the Covid-19 crisis, three American senators — Chris Murphy from Connecticut, Jeanne Shaheen from New Hampshire, and Chris Van Hollen from Maryland — asked specifically about Nepal. Jeremy Konyndyk, executive director of USAID’s Covid-19 executive taskforce, and Gayle Smith, coordinator of the State Department’s Global Covid Response, replied that the US was focused on Nepal and would be providing more support for testing. Regarding a supply of vaccines, however, there were few concrete answers forthcoming.

The three American senators were responding to a mass call-in campaign organized by the Covid Alliance for Nepal, a group of individuals from Nepal and abroad that is asking for global support in providing vaccines for Nepal. The campaign has sought to bring more attention to the plight of smaller countries like Nepal that might not receive the front page coverage that larger, more consequential countries like India have.

“It was good to have three senators raise Nepal's issue during the hearing. The USAID Covid Task Force head Jeremy Konyndyk responded that Nepal is a high priority alongside India. But among the support he spoke about, there was no mention of vaccines. So, we need to keep the pressure on,” said Luna Ranjit, a member of the Covid Alliance for Nepal.

After being confronted with its own crisis last year, the US has since amassed a massive collection of vaccines, including those made by American companies like Moderna and Pfizer and those by Swiss firm AstraZeneca. The White House has pledged to release 60 million doses of the AstraZeneca vaccine that are currently in production.

“We are not asking for a specific vaccine but AstraZeneca would be the preferred one as many Nepalis have been vaccinated with its first dose. But for now, the focus is just to get the vaccine,” said Ranjit.

Although the Covid Alliance for Nepal had written in Nepali Times that Nepal was not “on the list” of countries that would receive the 60 million vaccines, the US Embassy in Nepal clarified that such a list does not exist. At Wednesday’s Foreign Affairs Committee meeting, Gayle Smith said that the State Department would “soon” decide where the vaccines would go.

But with Nepal’s health care system buckling, it is more important than ever that vaccines be rolled out to prevent hospitalization. Even if vaccines do not prevent infection, all of the vaccines developed so far have been proven to reduce the severity of symptoms and keep patients out of the hospital.

Nepal has so far managed to fully vaccinate only 1 percent of its population — 362,001 citizens — while about 2 million have received at least one dose of either the Covishield or the Sinopharm Verocell vaccine. According to rough calculations by The Kathmandu Post, Nepal should have 751,000 vaccines doses remaining, not accounting for leakage. These doses, which consist primarily of the Verocell vaccine, will be given out as second doses to those who’ve already received one dose in the Kathmandu Valley, starting Sunday, May 16.

Even if all the doses are given out, just 3 million people, out of a total 20 million who need to be vaccinated, will have been inoculated with one jab and just a million with both jabs.

“Nepal is in dire need of vaccines because the infection rate is higher than India, the healthcare system is collapsing, and the country cannot produce vaccines by itself. Most districts are under lockdown and mass vaccinations should have been conducted,” said Abhilasha Shrestha, a research assistant professor at the University of Illinois at Chicago’s School of Public Health and a member of the Covid Alliance team.

Numerous online petitions have been drafted and signed to bring vaccines to Nepal. One petition addressed to US Ambassador to Nepal Randy Berry asks that the “United States government immediately release at least 12 million doses of vaccine [sic] to the Government of Nepal to assist it in protecting the population.” The petition has been signed by over 27,700 individuals.

“The goal of the petition is to bring international attention to what Nepal is going through. The news of India’s second wave was being covered internationally but Nepal’s situation, which is equally getting worse day by day, has not been covered as much,” said Ranjit.

The Covid Alliance is also crafting similar petitions to the UK government and the European Union, according to team members.

Similarly, there is another petition directed at the Government of Canada and Prime Minister Justin Trudeau, organized by ASHA Canada, which asks for support in providing vaccines and emergency medical equipment to Nepal. The petition, which has been signed by over 1,700 people, was handed over to Canadian officials on Wednesday, May 12.

The reach and effectiveness of online petitions, however, are limited. In the midst of a crisis, it is the government, particularly the Foreign Ministry, that should be lobbying foreign governments for support. The Record attempted to reach Sewa Lamsal, the foreign ministry spokesperson, multiple times to understand just where the ministry is on negotiations but all attempts were unsuccessful.

KP Sharma Oli, who is now a caretaker prime minister after losing the vote of confidence in Parliament on May 11, pleaded for assistance via an op-ed in The Guardian newspaper, saying “We need help”. Just days earlier, in an interview with CNN, he had said that the “situation is under control”. This kind of mixed messaging can do more harm at the international level by confusing foreign governments and well-wishers.

Oli appealed especially to the British government for aid and the UK Embassy in Nepal has helped set up oxygen plants. But there have been no assurances as to vaccines. The Britain-Nepal Academic Council, a coalition of Nepali and British academics in the UK, has drafted its own appeal to the UK Secretary of State Dominic Rabb, stating that the “UK, as the current G7 Chair, could leverage its international influence to secure vaccine supply to Nepal.”

Back in the US, Digbijay Mahat, a research scientist at the Massachusetts Institute of Technology (MIT), has attempted to provide the Health Ministry with channels of communication with major vaccine producers.

“Sometimes whether we like it or not, the biggest hurdle of Nepal’s bureaucracy is the ‘reach’ — reaching the right people at the right place. I used my connections at MIT to facilitate the conversation,” Mahat told The Record.

“The Nepal government, diplomatic channels, the Nepali diaspora in the US, all of us are trying to get the US to deliver vaccines to Nepal. But as vaccines like Pfizer, Moderna, and Johnson & Johnson are unavailable at the moment, instead of providing false hope back home, we need to try other channels, perhaps the Russian and Chinese vaccines,” said Mahat.

The Health Ministry is currently attempting to procure the Russian Sputnik V vaccine but there has been little progress on this end.

China has pledged to provide medical equipment, including oxygen cylinders and ventilators, worth 5 million RMB but no vaccines are included in this support package. This has led at least 83 civil society leaders to pen an open letter to the Chinese government, asking for “additional vaccines so as to curb unnecessary loss of human life as a result of lack of access to vaccines.”

According to a report in Kantipur daily, the Chinese International Development Cooperation Agency and vaccine manufacturer Sinopharm have both expressed interest in providing 2 million Verocell vaccines to Nepal. The Nepali Embassy in China duly informed the Health Ministry, but Minister Hridayesh Tripathi, who is also on the way out with Oli, has not responded four days later.

Confronted with the woefully inadequate response from a government that appears to be more concerned with political horse trading than with the pandemic, private citizens have come together, whether in Nepal or abroad, to either provide medical support, oxygen, and coordinate beds in hospitals, or lobby for vaccines. In a functioning system, the former would be the job of the Health Ministry and the latter of the Foreign Ministry.

“When a system fails, groups and people should come together and help for the greater good,” said Sweta Baniya, assistant professor at the Virginia Tech University’s Department of English and a member of the Covid Alliance for Nepal. “Small steps matter.”