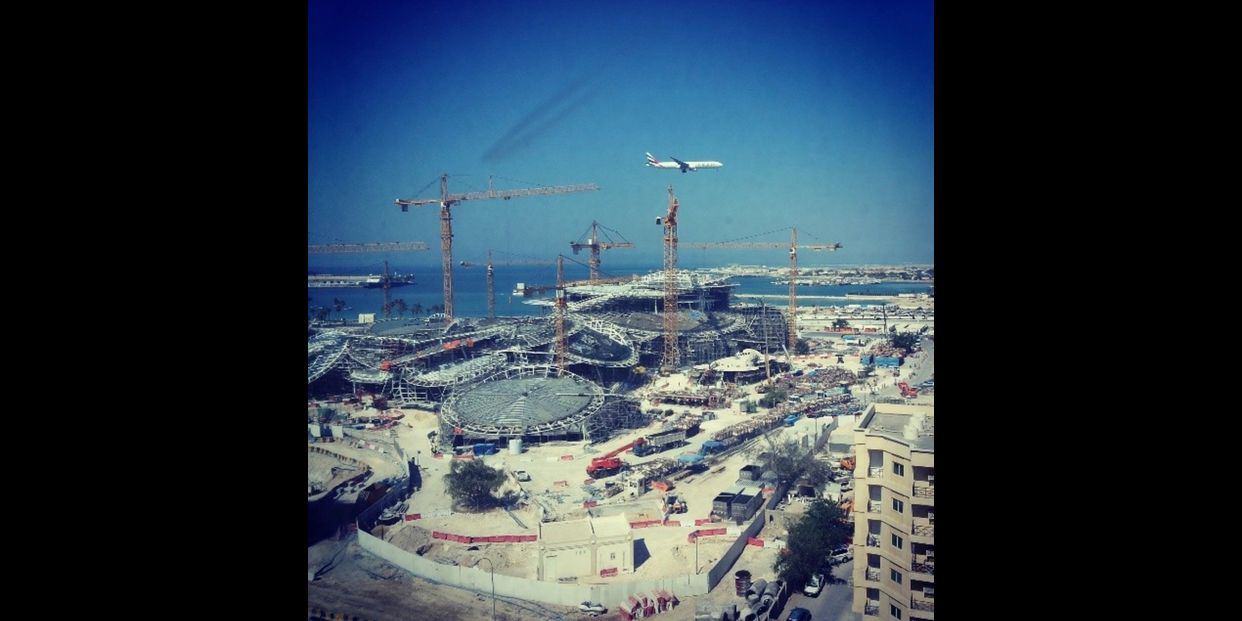 (Doha under construction, 2014/ The Record Nepal)

For the past 27 days, Lila has been waiting inside a deportation centre in Doha, praying for Nepal to lift its suspension on international flights so that he could be deported home.

“We will die if we stay like this. The water is dirty. The food is served in polythene bags and the police hurl profanities at as. They even kick us for asking questions,” said Lila, who hails from Nepal and had been working in Sanaya, Qatar’s industrial district, before the global coronavirus pandemic turned his life upside down.

Lila was on his way to a grocery shop on Salwa Road, Doha, on 13 March when Qatar’s CID police arrested him without any explanation. He was then taken to the deportation centre where hundreds of people like him were already there, waiting to be deported for violating the curfew on public places during the lockdown.

Nepali and other South Asian migrant workers in Qatar's jail before they were deported. /Narayan Sigdel

While most workers, mainly South Asian migrant labourers, including around 550 Nepali expatriates, were deported in the following days, some like Lila have been stranded at the detention centre after Nepal suspended all international passenger flights on 23 March.

Human Rights groups say that expatriate workers in Gulf countries are vulnerable to added risks to Covid19 infections as hundreds are crammed into small and unhygienic labour camps. On 7 April, Human Rights Watch said that people under immigration detention in Gulf countries pending deportation should be given alternatives to detention amid health risks and global travel restrictions brought on by the coronavirus pandemic. It also urged the nations that are part of the Golf Cooperation Council to curb the arrest of undocumented migrants, including of workers who ‘abscond’, lift any overstay fines, and follow procedures for migrants who wish to return home that respect health and safety standards.

“Many migrant workers in the Gulf, especially those who are undocumented through no fault of their own or have fled unscrupulous employers, are in prolonged pre-deportation detention in overcrowded, unhygienic conditions. As the coronavirus pandemic rages on, Gulf states should take prompt measures to protect the health and rights of detainees and staff in immigration detention centres, including by releasing people and finding alternatives to detention,” said Michael Page, deputy Middle East director at Human Rights Watch.

He also called on authorities to release all immigration detainees whose detention is either unlawful or unnecessary, including anyone whose deportation is not feasible in the immediate future.

Qatari authorities could not be reached for comment on the condition of workers at the deportation facilities. But Qatar, the host of 2022 FIFA World Cup, claims that it has taken necessary measures to protect expatriate workers.

“1,000 trucks loaded with goods enter the Industrial Area daily and food, water, masks, gloves and hand sanitizers are being delivered to workers,” the Qatari government told AP on 7 April while responding to allegations of forced labour and unethical treatment of workers inside the world cup camp. Just last week, Qatari officials had announced that they would cut official work hours while ensuring workers’ salaries.

Inside the deportation centre, several detainees have started to grow weaker due to days of poor quality food, dirty water and squalid accommodations, according to those that the Record spoke to. Six people who were in the same deportation centre before their deportation last month also describe having experienced similar conditions.

“It's a living hell. The one week I spent at the deportation centre was the worst of my life. The government should rescue Nepalis as soon as possible,” Narayan Sigdel, who was deported with 150 Nepalis just before the suspension of international flights, told the Record.

Narayan Sigdel on board Qatar airways flight after being deported by Qatar last month. Around 150 workers were deported with him on March 19.

Workers in the deportation centre say that Qatar was ready to deport them if Nepal resumed international flights.

“We urge the Nepal government to evacuate us. We are ready to return with our own money if the government lifts air restrictions. It is a matter of only five or six hours before we could get home,” said Lila.

He also said that none of the workers in the deportation centres have any symptoms of  Covid19 so far.

Echoing Human Rights Watch, Nicholas McGeehan, an expert on migrant workers’ issues in the Gulf, said that Qatar should impose a moratorium on detention for immigration offences.

"Qatar can't treat a global health crisis the same way it treats labour strikes. Its detention facilities will spread infection and jeopardize not just the health and lives of migrant workers, but everyone with whom they come into contact thereafter. Qatar should impose a moratorium on detention for immigration offences given that its facilities are so sub-standard, it should desist from arbitrary deportations and ensure that workers who have been confined in spaces where they were at heightened risk of infection are properly tested and treated as necessary,” McGeehan told the Record.

He added that Nepal, for its part, should be clear to the Qatari authorities about its expectations from them and should ensure that workers are tested upon return to prevent further spread of coronavirus in Nepal.

Rolling coverage of developments as the floods hit across the country.