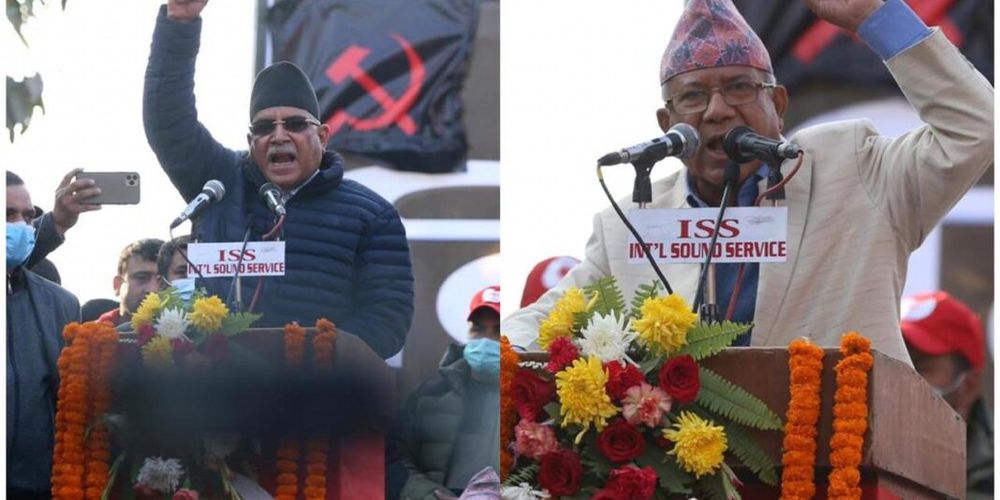 On Tuesday, Nepal witnessed an unusual protest. Thousands of leaders and cadres affiliated with the ruling Nepal Communist Party (NCP) were taking to Kathmandu’s street against their own leader KP Sharma Oli. Similar protests were held in all 77 districts. The leaders, who have already removed Oli from the position of party chief, warned of stripping him of his prime ministership too.

Until just a week and a half ago, Oli was the chief of the powerful ruling NCP. But a majority of the party’s leaders got together to expel him from the party’s top position, and they have now warned they will bring down his government--through street protests--if he refuses to step down on his own. During Tuesday’s massive protests, three former prime ministers from the ruling party--Pushpa Kamal Dahal ‘Prachanda', Madhav Kumar Nepal, and Jhalanath Khanal--instructed their party cadres to intensify protests against Oli, for at least a month and a half, across the country, so that “oligarchy” could be brought to an end soon.

These one-time comrades of KP Oli started taking to the streets after Oli recently dissolved the Lower House of Parliament, two years before the expiry of its mandated five-year term. Oli made that move upon sensing that disgruntled leaders within his party were preparing to overthrow him through a no-confidence motion. Meaning, Oli dissolved the House even though his party commanded a nearly two-thirds majority in the body. (The Constitution mandates the prime minister to dissolve the Parliament only if he fails to garner a vote of confidence or if the Parliament cannot produce a new prime minister.)

PM Oli has argued that he was forced to take the drastic step because he faced non-cooperation from his own party leaders, who, together with him, were leading one of the strongest governments in Nepal’s parliamentary history. And later, he announced fresh polls for the upcoming spring. The disgruntled leaders responded by claiming their faction represented the real NCP, removing Oli from the party, and reshuffling the NCP’s central party organisation. They are also vehemently opposed to Oli’s election plan.

Furthermore, they have been demanding the reinstatement of Parliament and the ouster of Oli and President Bidya Devi Bhandari from their respective positions. Many see President Bhandari as the key player in fomenting the existing political crisis.

“The decision to dissolve the House of Representatives isn’t acceptable to us. Laypeople and cadres, including those from the main opposition party, are on the streets to protest Oli’s decision, so the life expectancy of Oli’s totalitarian rule has been shortened,” said Nepal, one of the chiefs of the disgruntled faction, when he was addressing the protests, which is being regarded as a show of strength against the Oli government.

Comparing Oli’s working style with that of deposed king Gyanendra Shah, Nepal said his group was forced to strip Oli of his post as party chief because the PM’s recent move was pushing the country along a regressive path. Recalling how his speech in Butwal in 2005 had caused a “tsunami” against former King Gyanendra’s similarly unconstitutional move, leader Nepal warned that Oli would also face a similar fate if he refused to listen to the call to restore Parliament. Nepal added that the street protests would end up reviving the Parliament.

The protests represent one flank of the NCP faction’s two-pronged attack on Oli. Along with over a dozen of advocates, the disgruntled leaders have also filed a writ petition at the Supreme Court demanding the restoration of Parliament. The protesting leaders say they won’t stop until the Parliament is revived--even if the court endorses Oli’s move to seek a fresh mandate.

“The election won’t take place this upcoming spring. It won’t take place even by next autumn,” said Prachanda, the NCP’s other chairman. “Holding an election now will set a bad precedent, and any prime minister will in the future be able to dissolve Parliament whenever he is weak in the parliament.”

Besides gunning for Oli, Prachanda also fired broadsides against the major opposition parties. He warned the parties to quit dreaming of winning the election just because the communists were divided into two factions. “Actually, this election is not going to happen. It’s been declared just for sake of declaration,” he added.

But even as he faces opposition from all quarters, Oli is still not listening to his comrades. He announced polls for April and May next year in order to remain in power, but no one is convinced that an election can be conducted when all the major political parties are demanding the restoration of Parliament.

“This state of affairs can’t continue for too long. The regressive moves will be corrected if we just intensify protests for something like one-and-a-half months,” said Prachanda, appealing to his party leaders and cadres to continue protests against the dissolution of Parliament.