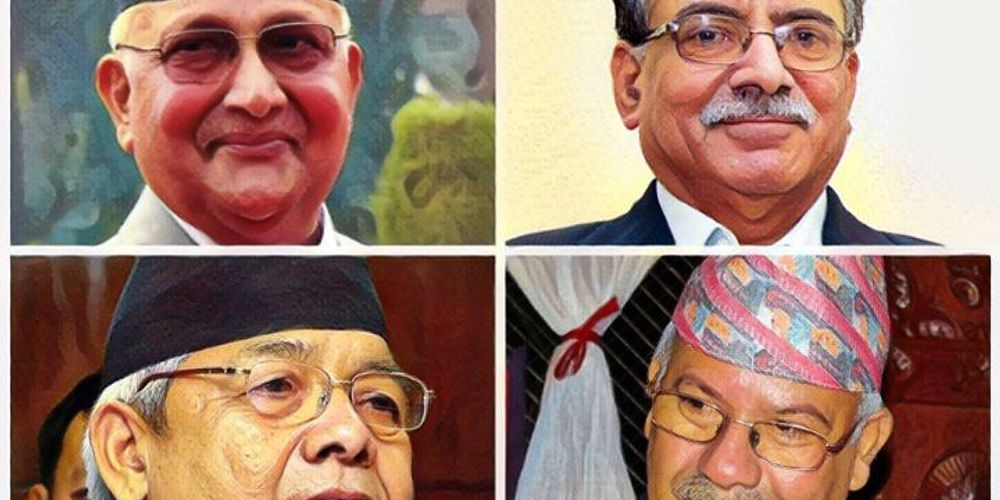 The two-and-half years of wrangling within the ruling Nepal Communist Party (NCP) has apparently come to an end. For now. But it’s not clear how long this power-sharing deal will keep the ruling party united. The tenuous partnership, after all, was the product of mere political expediency. The NCP was cobbled together in the wake of 2017’s parliamentary elections with the merging of Nepal’s two most prominent communist parties—one led by the former Maoist guerilla chief, Pushpa Kamal Dahal, and the other by reformist parliamentarian KP Sharma Oli.

During the course of the merger, both Oli and Dahal had agreed to lead the government on a rotational basis. But Oli, after reigning as the country’s PM for half of the party’s total five-year term, refused to hand over power to Dahal--in defiance of the written agreement that was inked before the parties were united. Dismayed at not being allowed to lead the government, Dahal started ganging up against Oli--by forming a faction comprising powerful dissident leaders, namely, former prime ministers Madhav Kumar Nepal and Jhala Nath Khanal and former deputy prime minister Bam Dev Gautam, among others.

But the faction had no real answer for Oli’s brinkmanship. He refused to relinquish the PM seat, and was even prepared to split the NCP rather than hand over the party reins to his comrade. Eventually, the dissident leaders had no option but to agree to let him run the government for the full term. Dahal, trapped in a Catch-22 quagmire, has agreed to lead the party as its executive chairman until the next general convention.

“According to our newly defined division of responsibilities, party chairman and prime minister KP Sharma Oli will focus on the effective running of the government, and the other chairman will run the party as executive chairman,” said the party’s spokesperson, Narayan Kaji Shrestha, after the party’s standing committee meeting, which was convened after an interregnum of 43 days.

Oli kept coming up with ruses to postpone that meeting after he found himself in the minority when the debate over the power handover had reached boiling point. Having bought some time, he gradually won over, one by one, leaders who had been critical of his work performance. He even helped provide Rs 720 million to former prime minister Khanal--who had joined the anti-government faction led by Dahal--for his anti-venom manufacturing project.

And he agreed to finally recommend another leader, Bam Dev Gautam, to be a member of the Upper House. If everything goes as planned, Gautam is likely to be named as an Upper House member under the quota to be picked by the President. Gautam, who was defeated with a huge vote margin by his Nepali Congress opponent in Bardiya in 2017’s election, had been exploring all available options to enter parliament ever since his poll defeat. But Oli was blocking all of Gautam’s avenues because he feared Gautam might pose a threat to his administration if Gautam entered parliamentary politics.

But around a month ago, realizing that his power was waning within the party, Oli himself had approached Gautam to offer him the Upper House member position. On cue, after getting the long-awaited position, Gautam has now stopped criticizing the government.

The newfound truce within the party has greatly helped Oli continue his tenure as prime minister. And with Gautam’s support, Oli has now cemented his hold on the nine-member party Secretariat, where members such as Ishwor Pokharel, Bishnu Poudel and Ram Bahadur Thapa had been throwing their weight behind Oli.

The other dissident leaders, for their part, are also not attacking Oli anymore because they hope to get a ministerial berth with the PM preparing to replace some ministers in his Cabinet. To appease some leaders, including Bhim Rawal, Oli and Dahal had agreed to endorse the $500 million in aid that the US had promised through the Millennium Challenge Corporation (MCC) only after the grant’s terms were revised. Leaders like Rawal have been demanding that Nepal reject the US aid, arguing the grant was given to Nepal as a part of a larger US military strategy called the Indo-Pacific Strategy.

Nepal is likely to lose the US aid if the agreement is not endorsed in parliament. But while the ruling party has decided to accept the grant upon its terms and conditions getting revised, it’s unclear whether the parliament will endorse it--even though the US senate has already approved the new terms and conditions. Oli has had to make all of these compromises to continue enjoying the support of his comrades.

Read also: Nepotism continues to flourish under the Oli government

And his party, to balance its internal power dynamics, has decided to hold the general convention from May 7 to 12 next year, where it will elect the new leadership. Party leaders say no one’s sure whether the general convention will take place within the stated date, due to Covid-19, the delay in completing the tasks related to the party-unification process, and because the list of party members is yet to be updated. And even as the NCP has found some stability for now, the internal wrangling for party leadership continues to intensify.

The recent months have seen the power equations within the party constantly changing. Now that Oli has announced that he will not vie for both the prime ministerial and party chief positions--provided the party leaders allow him to run the government for the full term--Dahal is seen as the frontrunner to be the new party chief. That recent deal has disheartened Nepal, who was regarded as the earlier frontrunner from the anti-Oli faction--until the power deal was reached between heavyweights Oli and Dahal.

Nepal, who had led the Communist Party of Nepal (Unified Marxist Leninist), which merged with the Maoists to form the NCP, for 15 years as its general secretary, also has his eye on leading the NCP. Sensing that he is being cornered in party politics--especially owing to the changed internal party dynamics--Nepal has announced he will start a nationwide campaign to reach out to party cadres and then contest for party chief.

Read also: Shame on you, PM!

But most of the other top dogs are regarding the temporary cessation of the turmoil at the top as a welcome development. The reconciliation between the top leaders has provided respite to the party leaders and cadres, mainly those close to Dahal and Oli. They have already started to share, on social networking sites, news related to the recent agreements reached within the party and are celebrating the deal.

They know the party leaders must work together if they are to appease the country’s denizens who are getting increasingly more restive. The ruling party’s leaders have reached the power deal at a time when the country is facing one of its worst crises, induced by the coronavirus pandemic. Hundreds of thousands of daily wage earners have no source of income, many are on the brink of starvation, and hundreds have committed suicide since the lockdown was enforced in March. The government has done little to save its people from either the virus or from hunger.

But although the top leaders in the NCP seem to have saved their party from the brink, political analysts say the recent deal within the party is only a temporary fix. They say disputes over who will exercise power will inevitably emerge soon because the top leaders, especially Oli and Dahal, have major ideological differences. Furthermore, they refuse to accept each other’s leadership and are bolstering their factions by keeping the leaders of their erstwhile parties intact in the NCP.

“It’s a short-term power arrangement,” said Vijaya Kant Karna, who teaches political science at Tribhuvan University. “The leaders will not continue to abide by the recent agreement, so this is yet another agreement that will fall apart soon.”