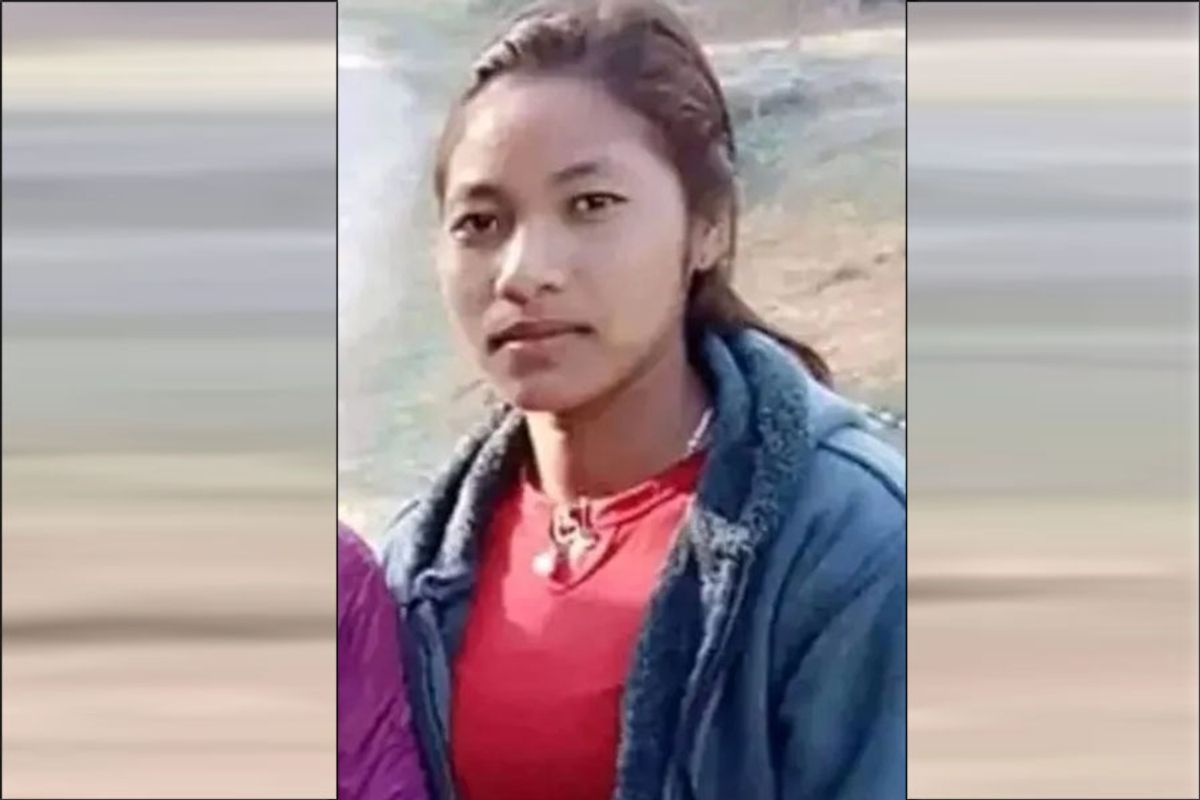 Nabina Tharu, 18, died of bullet wounds sustained during a protest on Monday in Bardiya. (Photo: tharuwan.com)

On Monday, Nabina Tharu, an 18-year-old from Madhuban Municipality in Bardiya district, died from bullet wounds sustained during a protest.

Nabina, along with many locals from the municipality, had gathered at Orali Bazaar in Madhuban and blocked the Postal Highway to protest the mauling of 44-year-old Asmita Tharu by a tiger earlier that same day. Faced with a second tiger attack in less than two weeks, protesting locals had demanded that the local government and concerned authorities take concrete measures to put an end to such attacks. During the course of the protest, locals and police clashed. Police fired tear gas while locals pelted stones.

But things turned ugly when police resorted to firing live rounds to disperse the crowd. Nabina, along with two others, were struck by bullets, according to tharuwan.com, a local news outlet. Nabina died while undergoing treatment.

Nabina’s death raises a question that has become all-too-familiar to residents of the Madhes-Tarai – why are the police so quick to fire live rounds during protests in the Tarai?

In the past five years alone, at least 16 people have died from bullet wounds during protests in the Tarai. Most recently, in October 2021, four people died in Rupandehi when police fired into the crowd after clashing with locals. Among those killed was Birendra Kurmi, a construction worker who had stopped to film the protest on his mobile phone. He had a bullet wound to the waist and severe bruising all over his body from beatings.

Locals, activists, and journalists all report that the police never resort to such extreme measures elsewhere in the country. Firing live rounds appears to be limited to protests in the Tarai, they say.

“We have seen time and again that security forces resort to extreme force in protests in Tarai, even when there are other means like using water cannons or less severe interventions for crowd control,” said Birgunj-based journalist Chandrakishore. “This just goes to show how the state treats communities from the plains. If only all the government’s investigation reports after such violent acts, from Nepalgunj to Tikapur, were made public.”

Oftentimes, the protests are organized to raise awareness and place pressure on the authorities to take action. Monday’s protest was organized under the banner of ‘bagh bata bachaunus’ (save us from tigers), a plaintive cry from a community that felt it had to take to the streets to get the local government to pay attention to an issue that was plaguing them. In July 2021, Abhinash Rajbhar was shot to death in Susta, Parasi district, during a confrontation with police over the mistreatment of his brother, Bipin, who had crossed the Nepal-India border to get medicine for their paralyzed father. Buddhiraj Neupane succumbed to injuries after police opened fire at locals protesting the rape and murder of a six-year-old in Bardibas in November 2020. Rasikul Alam was shot in August 2020 while participating in a demonstration in Jhapa against the arrest of two Muslim men who had been accused of slaughtering an ox. Again, in 2019, Saroj Mahato was shot in the head during a protest over the death of a 12-year-old boy who had drowned in an open sand pit in Ishwarpur, Sarlahi.

“Citizens have the right to protest to draw the government’s attention to their pressing issues, and that was what people in Bardiya were doing peacefully,” said Thakur Bhandari, secretary of the Federation of Community Forestry Users Nepal (FECOFUN).

Bhandari, who is currently in Bardiya, says that the police started firing without any warning. When the shots were fired on Monday, the protest was already winding down.

“There was no need to use force. What happened was a violation of human rights and that’s something we have seen happen repeatedly,” he said. “It just goes to show that people making decisions in the government have zero sympathy for people and their causes.”

Journalist Chandrakishore points out that police often act violently when the protests are related to natural resources. He says it is important to consider the oversized presence and involvement of state security forces in environmental protection in districts in the Tarai and the “prejudiced” attitude of the state towards communities that rely on the forests and rivers for their livelihoods.

“Historically, most of the communities in the Tarai, particularly those in the Chure region, haven’t always been aware of the ownership of natural resources, which is guarded and controlled by state structures,” he said. “When they do become aware and raise their voices, the state intervenes, often resulting in violent clashes.”

Tharus in Bardiya rely greatly on community forests and jungles in the buffer zone of national parks and protected areas for their daily lives. But it is this very community that has suffered disproportionately from the establishment of national parks in districts like Bardiya. Tharus suffer arbitrary arrest, beatings, and sometimes even death for entering national parks and conducting activities, like fishing or hunting, that their ancestors have done for generations.

While this perspective is important to consider, it is not the only one that leads to violent repression in the Tarai. Seemingly any protest is grounds for excessive force. Last year, after the four deaths in Rupandehi, former chief of the National Human Rights Commission Anup Raj Sharma visited the area and came away deeply disturbed.

“I returned with an impression that police are intolerant when they treat people from the Madhes,” Sharma told The Kathmandu Post. “Using bullets should be the last resort... only when there are no other options left to save the lives of many people and properties. And even during such a situation, they can only fire below the knees.”

As per the Local Administration Act, security personnel are only allowed to open fire when every other control measure has failed. Even then, they are required to provide prior warnings, and only shoot below the knee.

Police, in defense, say that protests quickly turn violent in the Tarai and they are forced to take countermeasures. They point to injured police personnel as justification. But rights activists argue that the police are not supposed to resort to live rounds except under dire circumstances. Police have an arsenal at their disposal to disperse crowds, including baton charges, water cannons, tear gas, and rubber bullets. But in the Tarai, the police seem to go quickly from baton charges to shooting into the crowd.

Fanindra Mani Pokharel, spokesperson at the Ministry of Home Affairs, said that the federal government has already begun investigating what happened in Bardiya.

“A probe committee has been formed to look into it and the CDO [Chief District Officer] of Bardiya is working closely with what is happening on the ground,” he said.

When asked why there are more instances of such violence during protests in the Madhes-Tarai, Pokharel said he couldn’t comment.

“We are working at every level, from federal to local, to ensure that such incidents don’t happen again,” he said.

But such promises ring hollow when they’ve been made constantly in the past and never been followed up on. The government has continued to refuse to publicly release the Lal Commission report that investigated the deadly violence in 2015 before the promulgation of the new constitution. Back then, approximately 45 people died in protests exclusively in the southern plains. A report, ‘Like We Are Not Nepali’ by Human Rights Watch, documented the disproportionate use of force by police against protestors and bystanders during protests staged in the Tarai over Nepal’s new constitution in 2015. The Asian Legal Resource Center, in its written submission to the 32nd Regular Session of the UN Human Rights Council, reported that among those killed, 41 percent were targeted, 56 percent were indiscriminately shot at in crowds, and 3 percent succumbed to injuries caused by beating.

Between 2015 and 2020, 52 complaints of unlawful killings were registered with the National Human Rights Commission. Among 18 custodial deaths reported by the Terai Human Rights Defenders Alliance during this period, 12 occurred among members of the Dalit, Madhesi, or other marginalized communities.

Marginalized ethnic communities in the Tarai, like Madhesis and Tharus, bear the brunt of police excesses. According to an Advocacy Forum report, ‘Rise in torture in 2018,’ people from ethnic communities in the Terai were more likely to be subjected to torture and misbehavior from the police. Madhesi and other marginalized community deaths in police custody are also disproportionately high.

According to Om Prakash Sen Thakuri, executive director of Advocacy Forum, a lack of training among police officers and the repeated lack of disciplinary action when authorities misuse their power by firing live bullets at protestors, particularly in Tarai, might have resulted in a repeat of similar incidents.

“People in power will continue to misuse their authority if they aren’t held accountable,” he said. “Why would security forces ever change their ways when they know there won’t be any consequences for their actions?”