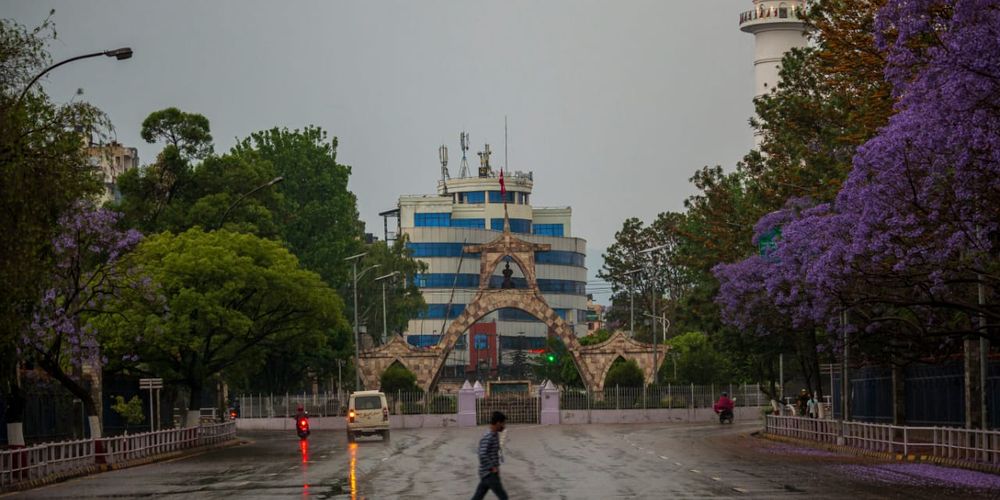 Nepal has officially crossed the Rubicon. With 7,137 new Covid-19 cases over the past 24 hours, the country is now past the point of no return. With 40 percent of tests coming out positive, the pandemic has permeated the community and it is not likely to slow its spread.

There are lockdowns in 22 districts across the country. Citizens have been asked to stay indoors but hospitals are overflowing and there are already reports of a shortage of essential medicine. Politicians, meanwhile, are content to fiddle while the country burns. Inter-party skirmishes continue, political horse trading is still the name of the game. Sitting ministers attend social events without masks or social distancing, even as other ministers test positive. The federal government has thrown up its hands and pretty much told citizens that they're on their own. Prime Minister KP Sharma Oli has yet to make a statement.

South of the border, in India, Narendra Modi is shouldering the blame as the country coalesces into funeral pyres in parking lots. Arundhati Roy points out, squarely, how Modi prematurely proclaimed victory over the coronavirus in typical chest-thumping fashion. Even as daily cases soared, Modi’s Bharatiya Janata Party continued to hold rallies and canvass for votes.

Oli apes Modi to a fault. The same jingoism, the same machismo, the same narrow definition of patriotism. Oli’s arrogance has led him to ignore projections and guidelines from his own Health Ministry. According to initial projections, Nepal would’ve hit 11,000 daily cases in July. If cases continue to rise at the current rate of increase, 11,000 is a matter of days away. Guidelines had mandated that large events with more than 25 people not be held, but immediately a day after the rules were issued, Oli attended an event with thousands of people gathered, maskless. The Dharahara, Kathmandu’s giant phallus, was inaugurated amidst a crowd of thousands, most of them maskless. His ministers have been photographed at inaugurations and wedding receptions, maskless.

Even during a lockdown, social events have continued. It is wedding season and hotels are still holding parties full of people. Even during a pandemic, there are always those whose lives continue uninterrupted, as if everything bad always happens to someone else.

But the people can be harangued into compliance. If they refuse, they can be penalized. But the leadership must lead by example. Oli has time and again mocked Covid-19, as if daring it to do something. Sneeze and get rid of it, he once said. Gargle with guava leaf boiled in hot water, he said again. He makes these comments off hand, as if swatting at a fly, all nonchalance. But the time for jokery is over. Nepal doesn’t need a wise-cracking ukhan-tukka prime minister right now — not that it ever did. It needs a chief executive who will act decisively while communicating effectively. Oli needs to come up with an emergency plan and he needs to announce it immediately, publicly.

Lockdowns will slow the spread of the virus but it will not eradicate it, especially as it has already spread deep within the community. With a reproduction rate of over 2 and 40 percent prevalence rate, there is little that can be done to stop the spread completely. This time must be utilized to prepare for the battle that is to come.

With hospitals near-collapse due to a massive increase in hospitalizations, arrangements will have to be made for alternative treatment centers. Banquet halls, school gymnasiums, and other large covered areas will need to be commandeered and turned into makeshift treatment areas. Local units are already doing this and such efforts must be supported, publicly, financially, institutionally.

Perhaps the Nepal Army needs to be mobilized. After all, it is a highly trained and capable corp of nearly 100,000 bodies who can assist in logistics, planning, airlifts, engineering, and even medical duties.

All levels of government need to be mobilized. Examples from Nepalgunj show that the local level is always more cognizant of local needs and can act to address them, if empowered. It is at times of crisis that federalism must come into its own. The center cannot hold, it must not hold. A time when dozens of citizens are dying every day is not the time to change provincial governments and engage in petty politicking. Put politics aside for once, for god's sake. When —  and if — you live through the pandemic, you can go back to politicking. This crisis requires a singular focus.

The authorities have failed to realize the power of effective communication. The vaccination rollout was botched and it is likely that the vaccination queues themselves could be superspreader events. Vaccinations need to restart as they are the only real way of combating the coronavirus but they cannot be delivered as they were over the past few weeks. Schedules, appointments, physical distancing, all must be ensured. And the people have to be told, clearly, openly and through all media.

The prime minister must address the nation and in a manner that befits the gravity of the crisis. No jokes, no home remedies, no political point-scoring. Thousands of lives hang in the balance. Oli must make it clear that everyone needs to stay home, take precautions, and seek medical attention only when necessary. He must be empathetic. He must have a plan.

On Sunday, 27 people died. Every day, an average of two dozen people are dying. The more people die, the closer those deaths come. Those concentric social circles get smaller and smaller and as Aman Sethi points out in his essay on the crisis in India, death is the only truth. Death can only be staved for so long by hoarded oxygen canisters and ill-obtained ventilators. Everybody dies, rich or poor, powerful or powerless, leader or follower. Never send to know for whom the bell tolls; it tolls for thee.

At some point in the future, when all of this is over, those of us who survived will look back on the events. When did things begin to get so bad, they will ask. Perhaps it will be today, May 2, or perhaps earlier. That will be unclear. What will be clear is that it happened gradually, then suddenly. All who will be remembered will be either the venal or the virtuous. There is still time to pick one or the other. Alea iacta est.