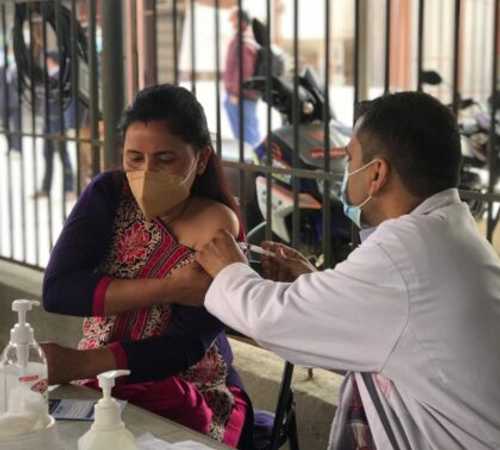 In late December, as Covid-19 vaccines went into final trials, countries across the world were faced with a dilemma over who should receive the vaccine in the initial stages. Frontline healthcare workers would undoubtedly be first but the population categories after them were up for debate. There were two major choices -- the elderly and those with comorbidities,  who are at greater risk of dying or younger frontline workers, who might not die or develop serious symptoms but can spread the disease.

Many countries aligned their choices with the scale and severity of the pandemic. The United States’ Centers for Disease Control chose to vaccinate long-term residents of old age homes alongside frontline healthcare workers in the first phase, moving on to essential workers like police officers, firefighters, grocery store workers, and teachers, and the elderly above 75 years of age. India, after vaccinating healthcare workers, decided to inoculate frontline workers like police officers and municipal workers.

Nepal too first vaccinated frontline healthcare workers, including doctors, nurses, sanitation staff, drivers, and female community health volunteers. But then it broke protocol. Instead of vaccinating other frontline workers or the elderly, the Nepal government decided to prioritise journalists, diplomats, and UN workers.

“Most countries prioritised vaccines based on two factors--risk of being infected and risk of being sick and dying,” infectious disease specialist Dr Anup Subedee told The Record. “The justification behind prioritizing health and sanitary workers was that they keep health institutions running but now, the government has started vaccinating bank employees, government employees, and elected representatives by breaking the queue set earlier. All of them should be vaccinated, but the government keeps changing its own rules and I don’t think that is reasonable.”

According to the Health Ministry’s initial plans, priority was to be accorded to workers at international border points, old age home workers, and prisoners and jailors, after frontline health workers. In the second phase, everyone above 55 years of age and individuals between 40 and 54 years of age with comorbidities were to be prioritised. Journalists, diplomats and UN officials are not mentioned anywhere in the vaccine priority scheme unless they fall in one of the other priority groups. Neither are bankers, bureaucrats, and elected local representatives.

The vaccination window for journalists, diplomats, and UN officials ended on February 12, with 2,240 journalists, 891 diplomats and embassy officials, and 349 UN employees vaccinated, according to data provided to The Record by the Immunisation Section of the Department of Health Services. Those vaccinated in the first phase of the vaccination campaign so far include: 88,187 health workers, 32,938 female community health workers, 24,503 hospital staff, 6,555 sanitation workers, 4,860 security persons involved in dead body management, 1,765 ambulance and mortuary van drivers, 21,060 prisoners and jail security personnel, 3,338 elderly at old age homes, and 1,394 staff at international points of entry.

Journalists defended their decision to take the vaccine, saying they too were frontline workers.

“We too go to the field and meet people. Besides, if a reporter gets infected, other staff in the office get exposed,” Guna Raj Luitel, editor of Nagarik daily, told The Record last week. “We have to keep ourselves safe to do the job.”

While the UN’s Nepal country team had earlier stated that it “has no plans of having all staff & dependents vaccinated this week as announced in the press,” the UN Resident Coordinator’s Office told The Record that it had forwarded over 200 names to the Health Ministry for vaccinations.

“Currently there are over 2,600 UN staff and dependents in Nepal. Upon the kind invitation of the Government of Nepal for the diplomatic community and dependents to be vaccinated, the names of 213 UN frontline staff were provided to the MoHP by the UN Resident Coordinator’s Office on 5th February 2021 for vaccination in line with the government’s current plan,” Simrika Sharma, public information manager for the UN Resident Coordinator’s Office, told The Record over email.

WHO Nepal's communications officer Sujan Amatya directed The Record to the UN Resident Coordinator's statement when asked for comment.

The UNRCO response takes into account WHO Nepal’s input which was provided in the drafting," Amatya said over email.

Among diplomats, the US embassy told The Record that it does not “authorize its diplomats to receive vaccines not approved by the US Food and Drug Administration,” while the UK ambassador tweeted that “hardworking frontline staff and vulnerable groups [should] get the vaccine first.” The Indian and Chinese embassies did not respond to The Record’s request for comment. The Indian Ambassador, however, placed a photograph of him receiving the Indian-donated Covishield vaccine on social media.

When asked why journalists, diplomats, bankers and local representatives were being prioritised, government officials said that these groups also constituted frontline workers since they deal with large numbers of people on a daily basis.

“As for vaccines for diplomats and international organisations, it was based on reciprocity. Nepalis in foreign missions got vaccines in their respective countries,” said Dr Shyam Raj Upreti, coordinator of the government’s Covid-19 vaccine advisory committee. “Besides, it was not a big number. This is why we decided to give them vaccines. It is true that old age people are at high risk, but we just do not have enough vaccines.”

According to Dr Upreti, vaccines leftover from the first phase of vaccinating frontline health workers were provided to those not on the priority list.

“We managed to vaccinate around 200,000 frontliners so we had some vaccines leftover. They weren’t enough to start vaccinating old people as planned earlier as we have 3.7 million people above 55 years of age,” said Dr Upreti. “So we decided to vaccinate the elderly once we have enough vaccines.”

Nepal received 1 million doses of the Covishield vaccine from India and had planned to vaccinate over 400,000 frontline health workers. The vaccination drive, which began on January 27, only managed to vaccinate half that number.

“Some health workers missed the vaccines as they could not come to district headquarters. It’s true that there was a lack of vaccination centres and thus a lack of access to vaccines.” said Uprety.

The leftover vaccines were then provided to diplomats, UN officials, and journalists, and now, to prisoners, security officers, the elderly in old age homes, government officials, and bankers -- including, inexplicably, CEOs.

“Why they did this is obvious -- because of the incompetence of the government,” said Dr Subedee. “The government said old people are a priority but it doesn’t appear to have updated data about the elderly at the ward and village levels. Old people cannot go to district headquarters for vaccines. The vaccines should be made available to them at the ward level.”

And that is one of the primary reasons the elderly have not received the vaccine yet, according to Deepak Jha, public health officer at the Department of Health Services. Vaccinating the elderly will require much more human resource as vaccinators will need to travel to each ward and sometimes, even individual homes.

“We don’t have enough trained staff. Most old people cannot travel to designated health posts, so first we need to train health staff to travel to where the elderly are and vaccinate them,” said Jha. “By the end of this month, we will finish training our staff and when more vaccines arrive, we will begin vaccinating the elderly.”

Nepal will be receiving around 2.256 million doses through Covax, the global vaccine alliance, and it is procuring another 2 million from the Serum Institute of India at $4 per dose. The vaccines are likely to begin arriving towards the end of February.

“The second phase of vaccinations will begin from March 7. In the second phase, old people are the first priority,” said Dr Uprety. “We have already asked the local bodies to prepare a list of people above 55 years. They already have data of people above 70 years of age as this group receives the old age allowance.”

But many old people are tired of waiting and believe that they should have begun to receive the vaccine before groups as they are more at risk.

“We met the health minister, issued a press statement, and even demanded that priority be given to senior citizens, all before the vaccines arrived here in Nepal,” said 67-year-old Krishna Murari Gautam, founding chairperson of Aging Nepal, an organisation of the elderly. “But the government gave priority to diplomats and UN people.”

According to Gautam, those who took the vaccine despite not being part of an at-risk group should have refused it on ethical grounds.

“UN officials, diplomats, and journalists should have thought of senior citizens before taking the vaccine,” he said. “If young people get Covid-19, they can survive but most elderly people who have been infected with the coronavirus have died.”

The Bibeksheel Sajha Party has even issued a statement arguing that the elderly should be prioritised while Nepalis on social media continue to wonder if everyone else will get the vaccine before those who desperately need it.

“The government itself doesn’t have ethical practices. Its decisions are opaque. The authorities do not communicate with the public,” said Dr Subedee. “It has not even bothered to explain to the public why the elderly are not being vaccinated.”

UPDATE: This article has been updated with a response from WHO Nepal.

Prisons need more attention during pandemics, but tend to fall behind in government’s priorities

Polls in the time of a pandemic

Vaccinating Nepalis will cost billions of rupees, but the Oli government would rather divert government funds towards election preparations