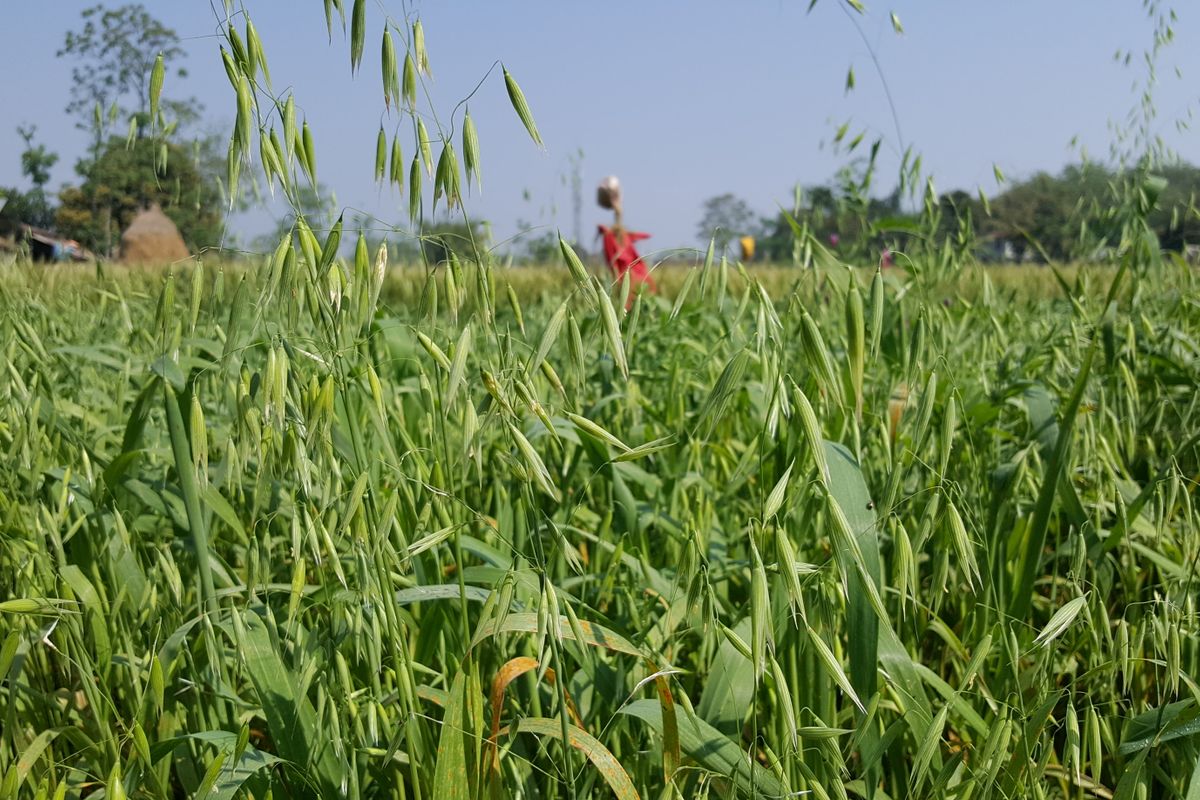 Oat grass (Avena sativa) is a non-leguminous grass variety that is popular among Nepali farmers. Since it can be harvested from January to March and fed to livestock as green grass, it’s best suited for dairy farmers. (Photo: Sanjib Chaudhary)

Maya Devi Basyal knows her grass very well. She, along with two women she’s employed, grows fields of different varieties of grass on her farm in Tamaspur of Madhyabindu Municipality in Nawalpur district. She has separate beds for teosinte, a type of grass that is rich in carbohydrates, oat grass, which is used primarily for livestock feed, sorghum-sudangrass, which is used for forage, and proteinous grass like vetch, grass peas, and legumes.

Basyal sources her grass saplings and seeds from the Goras Ghans Vikas Shrot Kendra, or the Goras Grass Development and Resource Center, which houses hundreds of grass and fodder varieties. Established more than a decade ago, the center sells seeds, saplings, and grass to farmers raising cattle and operating poultry farms. It also provides training on how to grow grass that is a good source of protein and carbohydrates for their livestock, poultry, and even human consumption.

Basyal received training at the center as part of the nonprofit Practical Action’s ‘dairy for development’ project, and has been putting what she has learned into practice. She has learned how to balance the nutrients in the feed for her cattle to get optimum quality and quantity of milk.

Such resource hubs are crucial support centers for an agrarian society like Nepal. A majority of households in rural Nepal rear cattle, keep goats, or raise poultry. All of these animals and birds require feed and the healthier the feed, the better their eggs, milk, and meat.

While Basyal has a medium-sized farm of 20 cattle that includes buffaloes, cows, and calves, Bhola Nath Lamichhane has a relatively larger one called the Kewalani Pashu Farm, with a capacity of holding 30 cows and buffaloes. Lamichhane too grows and harvests grass himself to feed his animals. But he’s also branched out into growing fodder trees like ipil-ipil, bauhinia, and monkey fruit, among others, to feed his animals.

According to Lamichhane, balancing the diet of his cattle has reduced his costs by 15 percent as he doesn’t have to buy commercial feed anymore.

“I have planted annual (teosinte, oat, berseem, vetch, bajra) and perennial forage (super napier, mulato, stylo, dasmodium) along with fodder (flemengia and mendula) on my farm and they are keeping my cows healthy and productive,” he said.

The varieties of forage and fodder Lamichhane has planted are available even during the dry season and as a result, his milk production has remained stable throughout the year. His grass and fodder fields also serve as demonstration sites for smallholder farmers who drop in to learn the tricks of the trade.

Lamichhane’s income too has increased, thanks to the improved milk production.

While farmers with mid-level and large farms are able to grow grass separately, it is not possible for smallholder farmers to grow grass on their own. They usually collect grass from the nearby fields and community forests to feed their animals and prepare a balanced feed that includes grain chaff, hay, green grass, mustard cake, salt, and minerals.

Such a practice is seen across Nepal, especially in the Tarai. In Nepalgunj’s Ghasiyaran Tole, men and women still sell large heaps of grass collected from the forests as their only form of livelihood. Their customers are primarily donkey, horse, and goat owners.

Farmers from other districts too are learning from Nawalpur’s grass center. In Chitwan, Saru BK from Kalika Municipality has three milking cows and has been using what she learned during training to feed her cows better.

“I didn’t know about balanced feed and how to prepare it,” said BK. “Now I give green grass, fodder, and bran to my animals. I also know when and how to feed the animals.”

Basyal and Lamichhane have also been able to focus on creating other income avenues beyond cattle rearing, which has helped their finances. Basyal, who started rearing cows after her husband returned home disabled after meeting with an accident in Saudi Arabia, also manages a women’s saving and credit cooperative. Lamichhane, who worked for eight years in Kanpur, India, is today a satisfied farmer, always ready to help others.

In the modern scheme, nothing quite compares to the way villages in Nepal grow food. In contrast to the world’s present agricultural landscape of mass monoculture

As Nepal readies to welcome new local leaders, dialogue with residents from Tilottama in Rupandehi reveals creative ways to champion environmental programs at the local level.