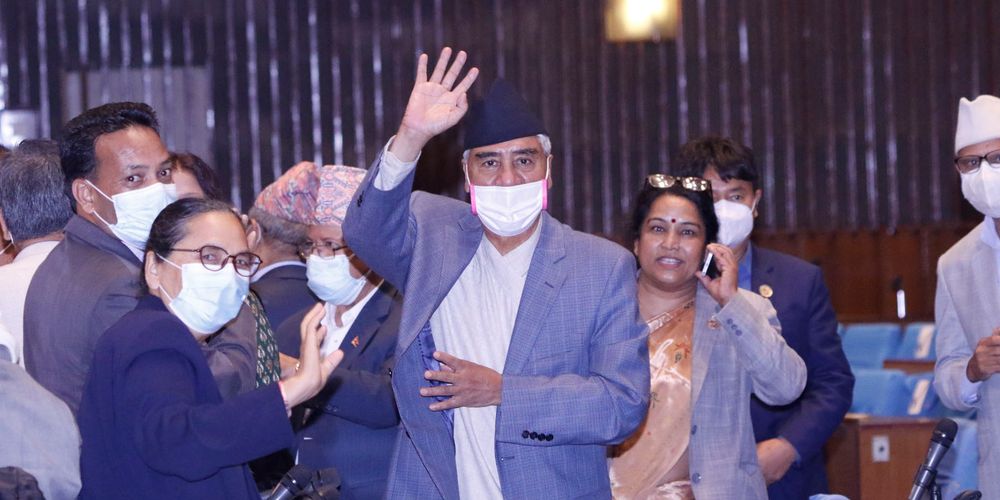 Sher Bahadur Deuba after obtaining the vote of confidence on Sunday night. (RSS)

Prime Minister Sher Bahadur Deuba has obtained a vote of confidence from the House of Representatives. Deuba, the Nepali Congress president, obtained 165 votes from among 249 members present, House Speaker Agni Sapkota announced at around 10 minutes past 10 pm on Sunday.

Deuba has effectively ensured his place as chief executive of the country for the next 18 months, all the time remaining in the current federal Parliament's term.

Deuba, 75, needed 136 votes for a simple majority in the 271-member House. The full strength of the House of Representatives is 275 but four members are suspended and only 249 were present for the vote. Deuba had the support of his 63 Congress members and 49 Maoist Center members. He was counting on at least 20 votes or so each from the UML and Janata Samajbadi Party to round out the majority. Deuba was expecting support only from the Madhav Nepal faction of the UML but given the numbers, it appears that even members from the KP Oli faction voted for him.

Deuba needed to obtain a vote of confidence from the House, as per Article 76 (6) of the constitution within 30 days but he chose to ask for a vote on the first meet of the reinstated House of Representatives.

READ OUR NEWSLETTER: DEUBA FOR THE FIFTH TIME

The chiefs of all the political parties represented in Parliament monologued in favor or against Deuba before the vote.

Former Foreign Minister Pradeep Gyawali from the UML celebrated Oli's tenure and warned against the precedent set by the Supreme Court decision while the Congress' Minendra Rijal retold a classic Greek myth, casting Oli as Icarus who flew too close to the sun in hubris and fell crashing to the waves of the ocean.

Pushpa Kamal Dahal of the Maoist Center took umbrage at Gyawali's insinuation that the Maoists had been 'forced' into democracy. Dahal appeared personally offended, haranguing Gyawali for the allusion. He emphatically stated that the Maoists had not lost the war and that Gyawali had disrespected the peace process.

Janata Samajbadi Party's Mahanta Thakur, who supports Oli, thanked the former prime minister for introducing the citizenship ordinance, which has also been revoked by the Supreme Court. Thakur emphasized the continuing difficulties of those legitimate citizens who do not yet have citizenship.

Baburam Bhattarai, also of the Janata Samajbadi Party, has stood against Oli and on Deuba's side, along with party colleague Upendra Yadav. Bhattarai quoted cliches in his speech, likening Oli to the emperor in Hans Christian Andersen's The Emperor's New Clothes. "The road to hell is paved with good intentions," he also said.

In the end, Deuba prevailed, and his place at the top of the executive appears secure, as long as no party in government pulls support. According to Article 100 (4), a motion of no confidence cannot be tabled for two years after the election of a prime minister. However, Article 100 (2) requires a vote of confidence within 30 days if any party in a coalition government withdraws support.

Deuba will now need to move quickly and decisively if he is to deal adequately with the challenges ahead. Nepal remains in the midst of a pandemic but the prime minister has not chosen a Health Minister yet. His first few appointments were political. Pampha Bhusal and Janardan Sharma from the Maoist Center were named Energy Minister and Finance Minister, respectively. Deuba also appointed the Congress' Bal Krishna Khand as Home Minister and Gyanendra Karki as Law Minister.

Deuba also needs to appoint a Foreign Minister. Pradeep Gyawali had won begrudging praise for his role as Foreign Minister in the Oli administration, even as its foreign policy was wildly inconstant. Oli had alternatively alienated and cozied up to India, all while courting China. The botched Covid-19 vaccination drive was also largely seen to be a diplomatic failure on Nepal's part as it was unable to capitalize on the country's widespread goodwill on the global stage. Adroit diplomacy could still be useful in ensuring that the majority of Nepali gain access to vaccines.

Narendra Modi, who had yet to publically congratulate Deuba on his appointment as prime minister, finally did so after the vote of confidence.

Deuba has just 18 months in power but that is a long time in Nepali politics. Deuba has already been prime minister five times and to no great cheer. His tenures leading government have so far been either lackluster or mired in controversy. At 75, he now has a chance to build a legacy, much like his forebear Girija Prasad Koirala did in his twilight years.

The time ahead will not be easy for Deuba, not that it has ever been easy for any Nepali prime minister. Coalition politics will come into play and Oli's UML is certain to be an active opposition. But if Deuba handles things right, he will weather the criticism better than his predecessor and will focus on the task at hand. He will refrain from self-aggrandizement and will be civil and courteous to his political opponents. That does not seem to be asking for much but Nepal has known Deuba for decades now and it is not an easy ask.