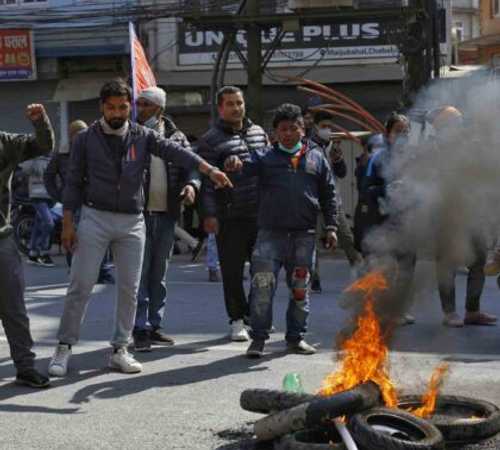 Sita BK came to Kathmandu from Bhojpur on Wednesday for a medical followup as recommended by her doctor. Nearly a year ago, she had undergone an operation for pericardial patch closure at the Gangalal National Heart Centre in Bansbari.

“For the past few weeks, I’ve been feeling a sort of pain near my heart, which could be due to the operation. So I called the hospital and asked for a doctor appointment for today,” said BK.

It was only on Thursday morning that she realised there was no way she would be able to make it from her sister’s home in Mulpani, where she is staying, to Bansbari. The Pushpa Kamal Dahal-Madhav Kumar Nepal faction of the Nepal Communist Party had called a general strike on Thursday to protest Prime Minister KP Sharma Oli’s dissolution of Parliament, and most public transport, along with businesses and schools, were closed.

“To reach my hospital, I need to change at least two public vehicles, but since no vehicles were running on the roads, I had no other choice but to get another appointment,” she said. “And I can’t stay here very long as I have to take care of my husband.”

It was a scene reminiscent of the mid-to-late 2000s when general strikes, or ‘Nepal banda’ as they’re colloquially called, were commonplace. Kathmandu on Thursday was a similar scene -- empty streets, shuttered shops, burning tyres, and masses of angry young men with party flags and bandanas enforcing the strike with violence. Although public movement on the streets was comparatively larger than during the heyday of the banda, most shops and businesses within the Ring Road remained closed.

While the Dahal-Nepal faction of the Nepal Communist Party have been protesting ever since Oli’s December 20 decision, they had refrained from calling for a general strike, keeping in mind the sentiments of the people who have long grown tired of bandas that disproportionately affect the poor. But on Wednesday, Chief Justice Cholendra Shumsher Rana administered the oath of office to over 30 Oli-appointed members of various constitutional organisations, including the Commission for the Investigation of Abuse of Authority. This led the Dahal-Nepal faction to up the ante.

But since early morning, outrage against the banda had been building on social media. Images of a taxi set on fire in Gongabu by banda enforcers made the rounds, as did news of a local eatery in Biratnagar being vandalised and its proprietors splashed with hot oil. By evening, social media had erupted, especially after central committee member Bishnu Rijal tweeted out a press statement calling the protest “peaceful”.

“No. It was not peaceful. I saw goons harassing an individual who pleaded that he is going to hospital. And the bandh is a disgusting tactic. Other than your party's display of power it didn't do any good for the larger people,” social science researcher Mohd Ayud wrote on Twitter.

“Peaceful? Do you realise your cadres poured hot oil over a mother and her pregnant daughter, which is an extreme human rights violation?” women’s rights activist Hima Bista tweeted.

On the ground, many were forced to walk for hours to get to their places of employment or to carry out important tasks, like BK’s medical appointment. Others who had dared defy the banda were threatened with violence.

Dibas Bista of Lubhu in Lalitpur was on his way to work at Dillibazar in Kathmandu on his bike when he was stopped by party cadres.

“They were very aggressive and didn’t listen to anything. They even tried to vandalise my bike so I had to go back home,” 25-year-old Bista told The Record.

Bista said he knew of the banda but had decided to take a chance anyway as the Home Ministry had stated via a press release that the police would prevent violence. The ministry said that it would take measures as per the 84-point action plan drafted by Home Minister Ram Bahadur Thapa a day ahead of the protest. The action plan clearly states that no group will be allowed to impose a strike or block highways and roads to fulfill their demands.

According to Bista, police officers stood by and did nothing to stop the banda enforcers when they attempted to vandalise his bike.

Deputy Superintendent Dipendra Kumar Basnet, incharge of the Gaushala Metropolitan Police Circle, spoke to The Record while heading a field police team at Chabahil. According to Basnet, police had not had to use force as the protestors were not troubling the public too much and were letting emergency vehicles pass.

“They are conducting a peaceful protest, which is their right,” said Basnet. “However, if they begin vandalising vehicles and shops, we will immediately take action.”

The banda also prompted a few counter-protests from those on social media. A group of young people, organised on the Men’s Room Reloaded (MRR) Facebook group, gathered at Koteshwor to protest the protest.

“We were over 70 bikes gathered to ensure that Nepal is not closed today,” said Sunil KC, one of the counter protestors. “We wanted to convince the public that they could move about safely.”

However, police intervened in their protest and took away their bike keys, said KC.

“We later spoke to the authorities and were permitted to go,” he said. “We conducted a small rally from Gwarko to Koteshwor. After spending some time there, we returned.”

Party cadres, on the other hand, say that they were compelled to enforce a general strike due to the actions of the Oli government.

“We don’t want to protest but we have no other choice. The prime minister cannot dissolve the House due to an internal party dispute,” said Jiwan Rai, one of the demonstrators staging a sit-in at Chabahil chowk. “We know that the protest will affect the public but this is for the greater good.”

Though Rai claimed that the protest would be peaceful, many demonstrators were seen aggressively stopping vehicles and forcing them to return.

Elsewhere in Kathmandu, banda enforcers took to vandalism and mob violence in order to enforce the strike. At Koteshwor, hundreds of protestors were openly vandalising vehicles, stopping and striking motorbikes.

“People can get aggressive sometimes as it is a protest against the government,” said Bauram Gautam, a Province 1 member of the Nepal Communist Party. “We are a democratic country and we cannot remain quiet any longer.”

According to the data from the Nepal Police, a total of 128 demonstrators were arrested from across the country. Eighty-six were detained from inside the Kathmandu Valley for vandalising vehicles and clashing with the police. According to Senior Superintendent Basanta Bahadur Kunwar, spokesperson for the Nepal Police, 32 vehicles have been reported vandalised by demonstrators across the country.

“We arrested people who were vandalising vehicles and attacking the public as well as the police. Three of our officers have reported injuries,” said Kunwar.

But as usual, it is the general public that must bear the brunt of the in-fighting between Oli and Dahal. Research has shown that it is generally low-income groups like daily wage labourers who tend to suffer the most during general strikes like these. Furthermore, an economy that is still reeling from the pandemic and the four-month lockdown in 2020 will not be able to sustain losses from any more general strikes, say economists. In 2010, each day of a general strike cost the economy $40 million; “now with GDP $34 billion, it would be $80 million a day,” economist Sujeev Shakya wrote on Twitter.

Many believe that while Thursday’s protest had the right ends, the means were wrong and reminiscent of a bygone era of political confrontation. Oli’s dissolution of the House has been deemed unconstitutional by many legal experts, including four former chief justices of the Supreme Court, with others seeing it as an ominous ‘power grab’ that does not bode well for Nepal’s fledgling democracy.

Besides the violence, the partisan nature of the protests has irked many. The argument is that an internal struggle for power between two ageing leaders of the ruling party should not trample on democratic institutions and inconvenience the public.

Meanwhile, Prime Minister Oli himself has called a ‘show of force’ rally for Friday, aiming to gather 200,000 people. There are some who believe that Thursday’s rally was, in part, meant to disrupt Oli’s plans to bus in protestors for Friday’s rally.

That rally, which will gather in front of the Narayanhiti Museum, is certain to disrupt life in Kathmandu, too.

In the inner chambers of the Drafting Committee of the Constituent Assembly, "upper caste" lawmakers chop off and distort previously agreed provisions for Dalits