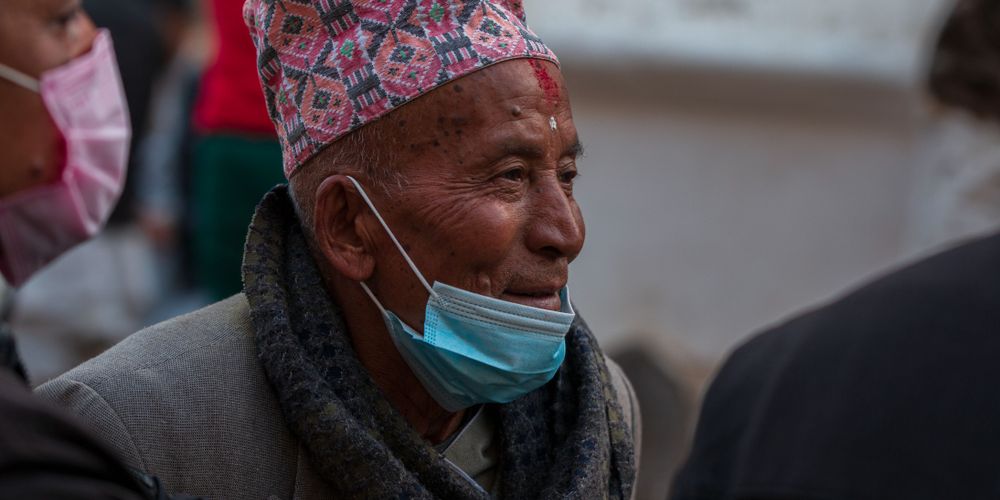 Sixty-three-year-old Lal Bahadur Bhujel from Sindhupalchok makes a living as a woodworker in Kathmandu. A daily wage worker, Bhujel has been hit hard by the pandemic. During the lockdown, there have been days where he has been unable to secure his daily food and rations.

To seek work, he cannot sit idle at home. He knows he has to wear a mask in public but he doesn’t really know why he has to wear one or how it protects him. He has learnt to awkwardly mask himself — covering just mouth while leaving the nose uncovered. It’s inefficient and not the right way to wear a mask but Bhujel doesn’t know any better. He has also never heard of Covid-19 vaccines.

Many elderly people like Bhujel, who should have rightfully received vaccinations by now considering his age, remain ignorant of vital information coming out from the government regarding the safeguarding of their health — a clear instance of how the government has failed to inform its people. This is because most information on Covid-19 precautions, doctors, hospitals, and vaccine drives are disseminated via the internet and social media. Those who do not possess a smartphone or have access to the internet, like Bhujel, and who don’t own TVs or listen to the radio, are being forgotten.

The Covid-19 pandemic and its responses have illustrated just how wide the enormous ‘digital divide’ remains in Nepali society. The government has not been able to provide information reliably to a section of the society that does not have access to the internet. This has further echoed inequalities in our health care system, especially when it comes to the equitable distribution of vaccines.

The digital infrastructure set up by the Ministry of Health and Population for vaccinations has made it evident that people without smart devices and internet literacy are being left behind. On May 13, the ministry introduced an online form on its website for vaccine registration, but many people — even those who use the internet regularly — were unaware. The Health Ministry had posted information about the registration to its Facebook page, which now has close to 800,000 followers. The information, like many press releases and clarifications, are often not available on the official website, only on its Facebook page. By the second week of June, just over 1.3 million individuals had registered for the vaccines.

The ministry says it is overwhelmed with the number of registrations online, with over 30,000 new registrants each day. Recent data from the Nepal Telecommunication Authority states that in Nepal, 26.35 million people, which is 87.19 percent of the country’s population, are now connected to the internet. But online vaccine registrations hovered just over a million, showing how data often doesn’t translate into real-world behaviors.

While information and awareness on Covid-19 are easy to distribute via the internet and social media, individuals who do not have the access to smart devices and the internet have been victims of secondhand information and misinformation about the virus, precautions measures, and vaccines. This has already caused a huge discrepancy in the vaccine rollout, as it is serving citizens with access to the internet. Most of the information on vaccines, first and second doses, assigned vaccination centers, and availability spread on social media among the digital elites who are better informed. This prompts the question: are vaccines a right or mere privileges to be secured by a certain class of people?

Most queries on the Health Ministry’s Facebook page concern the vaccine registration form — to which tutorial videos have been created and posted by YouTubers for guidance. But the government’s own digital infrastructure is not up to par with modern standards, and the forms are difficult to fill out on smartphones.

The problem doesn’t just end here, as many digitally literate Nepalis also rely on agents to fill out their forms — be it for their driving licenses, DV lotteries, government formalities, or even university applications. Even if they are capable of understanding and making use of the internet, many are afraid of messing up a small detail and hence, rely on those who they believe know how things are done.

While the government’s efforts to go digital should also be recognized, the vaccination form fails to comply with Web Content Accessibility Guidelines, which are universal standards to make web content accessible for individuals with disabilities. It is the responsibility of the government to make their content as friendly as possible to as many groups as possible, especially considering issues of exclusion during this horrifying pandemic.

Digital discrimination in vaccinations is being witnessed everywhere in the world. In the US, older citizens couldn’t book their appointments online and had to wait for hours on the phone to get their vaccination dates. Recent and more relatable incidents are coming out of almost every corner of India, which is currently carrying out a mass vaccination campaign. The ‘unfairness’ and ‘discrimination’ in securing vaccines have created a class divide between people online and people offline. Mostly the elderly, daily wage workers, marginalized communities, those with disabilities, and women have been victims, as criticisms against Co-Win and the Aarogya Setu app, which register for vaccinations, arise. This scenario is likely to echo in Nepal as most of the country struggles to reach rural people, daily wage workers, the elderly, the marginalized, and last mile communities.

If the government wants to carry out a successful vaccination drive, it needs to focus on the offline population as much as those online to ensure vaccine equity. Offline channels that have long been in place to disseminate information need to be mobilized more effectively and in a targeted manner.

Communicating information effectively to everyone is key to a successful vaccine rollout. Maybe hiring 100 vehicles and announcing information about vaccinations will be more efficient than online forms or apps. The government must ensure that vaccine appointments can be booked via phone and in some circumstances, even in-person. Toll-free registration hotlines dedicated to certain age groups and genders must be set up. This will help vaccine seekers from endless waiting and will prioritize the elderly, women, and other marginalized groups. Information on residents should be acquired from the local level and ward offices as well to stay connected and set vaccination appointments upon availability and priority.

The online forms could also do with changes in order to make them more accessible. The forms should be available in a number of local languages, not just English and Nepali, and booking processes easier with less invasive questions. The system should make use of real-time vaccine slots and availability and distribute them with fairness and transparency. The government however must examine each online registrant and categorize them according to priority. Some people without access or digital literacy might seek help from their friends and families to register — they should be prioritized. Using both offline and online infrastructures can ensure a successful vaccine campaign in the days to come. The goal of the government must be to contain the virus and save lives — regardless of whether they are present online or not.