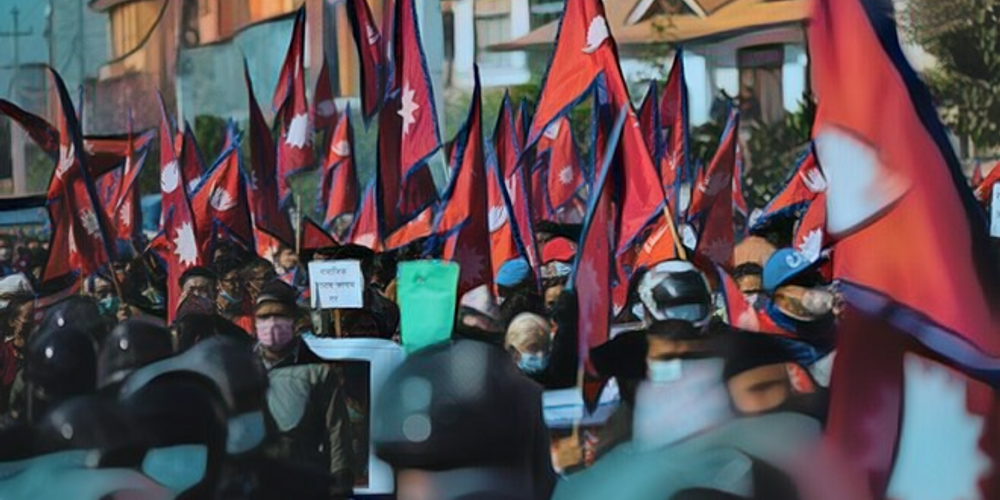 For more than two decades, Nepalis have experienced many power-sharing permutations in government. These have ranged from the predictable to the unusual. Two conservative forces — Nepali Congress (NC) and the Unified Marxist-Leninist (UML) — have allied in the past, but so have former communist rebels with pro-monarchy forces, and former communist rebels with the Nepali Congress, the same party that unleashed the security forces against the same rebels. And now, the Madhes-based parties have allied with the UML, the party whose leaders are infamous for their anti-Madhes rhetoric.

Given their rather expedient, transactional provenance — i.e., lacking shared ideological or programmatic vision — these alliances have not endured beyond an initial honeymoon phase. The most common explanation has been that one or the other side would renege upon the initial agreement of power-sharing. This resulted in a continuous state of instability, multiple coalition governments, and 26 prime ministers in as many years.

The situation seemed to change in 2017 when two communist forces — the party of former communist rebels (Maoist Center) and the UML — announced a coalition for the 2017 constitutionally mandated elections. This coalition would be followed by an eventual merger to form the Nepal Communist Party (NCP). While China’s nudging and the communist backgrounds of the two parties helped, the merger was necessary to win the elections in order to establish a leftist stranglehold on state resources and suitably orchestrate the unfolding federalization process. The personal ambitions of Pushpa Kamal Dahal to remain politically relevant in the face of his party’s imminent electoral defeat and of KP Sharma Oli to finally ascend to long-denied party leadership were powerful incentives that impelled the merger.

The electoral coalition swept the 2017 elections and formed governments at the federal level and in six of seven provinces. The coalition also formally merged into the NCP with a unified symbol registered at the Election Commission and commenced root-to-branch restructuring to better reflect unification. Importantly, both Dahal and Oli got what they wanted from a personal standpoint.

Over the course of the past three years in power, the NCP performed no differently than previous governments, despite its majority in Parliament. If anything, kleptocracy was entrenched and impunity increased. Although general state incapability over the past several years and increasingly inept public administrators can also be blamed, the most important reason for the failure of the majority government was the drastic narrowing of self-interest, to such an extent that the party undergirding government was no longer evident. Instead, the infrastructure of two former, well-organized component parties was placed in service to bickering individuals.

Whereas in the past, coalition governments provided a convenient way for parties to retain power and extract rent in a fairly predictable manner for party building, this latest coalition began falling apart when individual ambition sidelined party goals. Initially, both Dahal and Oli maneuvered largely for party benefit, albeit through their own loyalist factions. As long as the party as a whole was positioned to remain in power indefinitely and manipulate federalization, this seemed reasonable and mimicked past coalitional practices.

Things started turning sour when the time came for Oli to hand over the prime ministership to Dahal. Instead, he slowly started turning the government and the NCP into a one-man show. Predictably, Dahal’s frustration at being sidelined started fueling intense confrontation and spread through the ranks, pitting factions against each other and stalling governments across the country.

Nepalis are familiar with intra party leadership feuds where party leaders maneuver behind closed doors to gather a majority and one-up their rivals, while still adhering to party rules and procedures. This time around, with Oli as prime minister and co-chair of the NCP, the participatory, consultative precedent of maneuvering through established procedures was ignored. From the preemptive dissolution of Parliament to prevent losing a vote of confidence to adding 556 loyalists to the NCP’s 446-member Central Committee to ensure his faction’s majority, Oli’s actions showed disdain for party norms. In effect, over two years as co-chair and prime minister, Oli established a cult of personality that absolved him from day-to-day rule-bound maneuvering that usual democratic party politics require.

In settled democracies, there are reasonably well-established institutions that deter the adventurism of rogue public servants and branches of government, usually with a constitutional framework to guide them. These institutions constrain and impel public servants to exercise their duty of custodial care for the rule of law and for their constitution. Such constraints have not been reliable in a fledgling democracy like Nepal, where institutions of restraint are headed by loyalists with less incentive to abide by the law, including the Constitution, when it does not suit their political patrons’ interest. In both instances of parliamentary dissolution, the duty of custodial care was neglected by the Office of the President and shifted, by default, to the Supreme Court.

In the first instance, unlike the Office of the President, the Supreme Court upheld its role of constitutional guardianship by overturning the decision to dissolve Parliament. Fast forward three months to the second instance of parliamentary dissolution, custodial duty got perverted into collusion between the prime minister and the president, aided and abetted by venal political factions.

Regardless of how the Supreme Court rules on the latest instance of parliamentary dissolution, it is clear from political behavior over the past several months that Nepali politics has turned away from democracy, constitutionalism, and the rule of law. Blaming Nepal’s neighbors is too convenient, even if plausible. Individual opportunism is only a partial explanation for this turn. Instead, the answer may be found in relation to that most common institution of representative politics — the political party.

Modern representative democracy is unthinkable without political parties, for they covenant state to society through a rule-ordered system of governance. Questions about representative and accountable government cannot be addressed without interrogating how political parties function and perform. Specifically, parties condition political behavior through the demonstration of their adherence to fundamental tenets of a chosen system of governance. For the federal democratic republic of Nepal, constitutionalism and rule of law must first inhere in political parties for state and society to behave accountably.  Sadly, three decades after ending the absolute monarchy in favor of multi-party democracy, Nepali political parties are neither representative nor accountable. Their leaders remain in position, every one of them acting opportunistically over the years to serve narrow self-interest.

While KP Oli’s adventurism in creating two successive constitutional crises amidst a global pandemic is the most recent extreme example, the lack of accountability for leadership failure is a common feature of Nepali political parties. Just as failed leaders retain support within the UML — Oli’s current party after the breakdown of NCP — so do they in the Nepali Congress, Maoist Center, Janata Samajwadi Party (JSP), Rastriya Prajatantra Party (RPP), and others.

The standard bearer of Nepali democracy, the Nepali Congress, is arguably even worse off than the leftist parties. After several postponements, and only when confronted with a legal deadline, did the Congress recently announce dates for its 14th general convention. The last such convention was held in 2016. A mandatory requirement, the general convention can potentially refresh party leadership while holding office bearers accountable.  In 2017, despite the embarrassing failure of the Congress in the most consequential elections in Nepal’s modern political history, no leader took responsibility nor did the party question its public relevance in the face of electoral loss. In the three years since that electoral drubbing, the party has been a mute spectator to the undermining of constitutionalism and rule of law.

While the examples above illustrate that the parties have not functioned democratically, they also reveal that party performance is severely dislocated from public interest. Who then do political parties serve and why do failed leaders endure?

Elections have no meaning if political parties are not representative of public interest and if parties cannot hold their leaders accountable. To this end, urgent party-related reforms are needed. These must address, at minimum, term limits for party leaders and a compulsory retirement age (from active party duty), reform of procedures for selection of party members for public office or for intra-party responsibilities and their performance assessment, and transparency in individual wealth and election campaign contributions to the party.

Currently, in the absence of term limits, the same cohort of senior leaders vie for and occupy key party leadership posts for decades. Leadership longevity within parties has enabled them to establish, nurture, and patronize relationships that are mutually and narrowly beneficial. From selecting office bearers for party roles to nominating party acolytes and relatives to valuable government positions, long-serving leaders shape and constrain leadership transitions and accountability.  Term limits and compulsory retirement will increase turnover of incumbents and disrupt clientelist relationships, refresh party ideologies and strategies through new leadership, and expand leadership representation from youth, women, and minorities.

Reducing the use of nepotistic and clientelist approaches in party function will require professionalizing the process of assigning and assessing performance of party functionaries. Age or seniority must be balanced against merit; longevity in position balanced against performance. Using the general convention or central committees of parties to assign and assess functionaries has proven to be abysmally ineffective. Other processes and procedures must be found between elections to incentivize office holders.

The 2017 elections and subsequent government appointments revealed the level to which wealthy individuals with no demonstrated history of public service could buy their way into politics and positions of influence in government.  In addition to much-delayed election campaign finance reform, legal and regulatory steps must be taken to prevent conflict of interest in party nominations, undue influence on government through party financing, and transparency in declaration of wealth before and after party appointments.

Enacting these reforms will not be easy, for there will be considerable resistance from senior leaders in every party. Although the constitutional framework for federalism does not treat party reforms explicitly, changes should still be possible based on the constitutional spirit of devolution for greater and higher quality representation and accountability. For any possibility of change, Nepali and international stakeholders shall have to collaborate with the common understanding that political party reform is fundamental to strengthening Nepali democracy. If in place, the reforms will cause political parties to perform their primary duty of being the covenantal link between state and society, making the former more accountable towards, and representative of, the latter. This will help check the kind of adventurism and assault on constitutionalism and rule of law that Nepal has witnessed.

The lack of attention to political party reform over the past three decades has resulted in the present hazardous turn away from democracy in Nepal. Old habits within parties must be broken for a return to representative and publicly accountable government. It is therefore essential to initiate political party reforms before the next round of elections