Galvanized by a series of videos detailing one woman’s harrowing experiences of being raped as a minor, Nepali women and men take to the streets in protest. 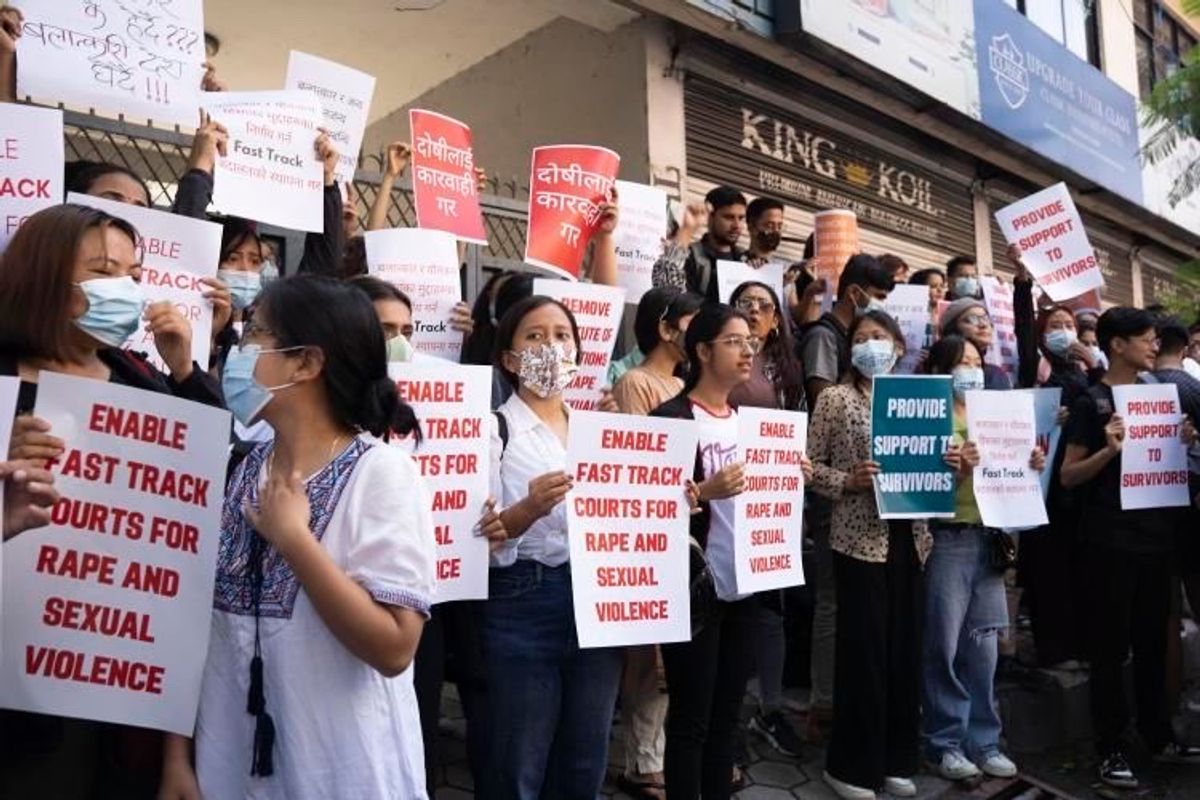 People protest in Baluwatar, near the Prime MInister’s residence, on Friday, demanding justice for a sexual violence survivor who shared her story on social media on Wednesday. (Photo: Bunu Dhungana)

On Wednesday, May 18, a string of videos posted by a 25-year-old makeup artist went viral on TikTok. In the videos, the woman shared distressing details of being raped by one of the organizers of Miss Global International 2014, a beauty pageant she had participated in. At that time, she was only 16 years old.

In the series of videos that have since been taken down by TikTok but reuploaded to Instagram, she described in harrowing detail how the much-older man drugged and raped her one night at the Everest Hotel in New Baneshwor, and then continued to rape her over a period of six months, blackmailing her with nude photos he’d taken of her. She shared how the trauma continued to follow her, despite confronting her rapist in public, and how her partners had used her trauma against her over the years. She was sexually assaulted again, once by a man from a modeling agency in Dillibazar while taking her measurements and again by a colleague during a work trip. She also spoke about her traumatic experiences with a psychologist she’d reached out to for help.

Eventually, the woman named Manoj Pandey, who owns Model Global Visas Consultancy, as the perpetrator. She also called out Malvika Subba, a former Miss Nepal and an outspoken feminist, for rebuffing her when she called Subba for help. Subba reportedly said that it wasn’t her problem. Subba was 33 at the time.

Ever since the videos were posted online, they’ve garnered thousands of views and have sparked numerous discussions online regarding rape and rape culture, harassment, the entertainment industry, and the silence of people who are supposed to be allies.

The rising wave of anger spilled out from social media onto the streets of Baluwatar today, May 20. Over a hundred women and men gathered at Baluwatar chowk, a few minutes from the prime minister’s residence, to protest the rape and rape culture under the banner ‘Rape needs justice – Occupy Baluwatar’.

“The protest was initiated to extend support to the survivor and express our outrage and desire for change,” said Subin Mulmi, an advocate and researcher who has a long history of engagement with the feminist movement in Nepal. “The survivor herself was not present at the protest today but was informed by a representative from our legal team. This is a movement that we intend to carry forward in the days to come through a series of events with the help of activists and individuals.”

The protest was initiated as a call to action and witnessed an outpouring of individuals who showed up in solidarity. Many women said that the survivor’s testimony had brought them to tears while highlighting just how unsafe women remain in this country.

“I could not get past the fourth video. That was enough to bring me here, not because I’m feeling sorry for her but because I’m here to support her morally and to demand justice,” said 21-year-old Priyanka Shrestha, a student at Tri-Chandra College.

While supporting the survivor and demanding justice for her were at the heart of the protest, there was also a demand for a concrete policy change – an end to the existing one year statute of limitations for rape cases. A statute of limitations is essentially a limit on when a police complaint can be filed. In cases of rape or sexual abuse, a complaint must be filed within a year of the incident or in case of minors, within a year of the survivor becoming an adult.

Many activists argue that the one-year limit is not just impractical but unjust, as rape and sexual abuse are deeply traumatic events that can take months, years or even decades to come to terms with.

"Sexual violence is an extreme violation of a person’s individual safety and the effects can remain in the body, mind, and nervous system for a long time. In the immediate aftermath, survivors may first need for the act of violence to be acknowledged and recognized and know clearly that it was never their fault,” said Prathama Raghavan, a development psychologist and psychotherapist. “It may take time for survivors to feel supported enough to be able to report it. Statute of limitations do not take into account these effects of the act of sexual violence.”

The protest is now taking shape as a self-organized movement where committees are being formed to carry the movement across social media. The committees will include an event team to organize protests, communications team, and legal team, among others. According to Mulmi, the movement has four major goals: hold the perpetuators accountable, remove the statute of limitations for rape and sexual violence, enable fast track courts for rape and sexual violence, and provide support to survivors.

“The statutory limitation is a procedural law which is hard to remove, so we’re working on initiating an online petition so that we can take it to the Supreme Court since it takes into account public opinion. We are also preparing to file a writ petition for the removal of the statutory law,” said 26-year-old Dikshya Khadgi, a student at the Kathmandu University School of Law, who was also present at the protest.

According to the organizers, the movement needs to go beyond the legal system and help build stronger solidarity through the establishment of organizations that can help provide collective responses and support to survivors in terms of psychosocial support, financial support, emotional support, and protection. Conversations around consent and sexual violence also need to happen, they say.

As the outrage built on social media and the streets, lawmakers too have taken note. On Friday, speaking before the federal parliament, Nepali Congress Member of Parliament Gagan Thapa recalled seeing the videos on social media and demanded action against the perpetrator. Following this, House Speaker Agni Sapkota directed the government to look into the matter and carry out an investigation. Sapkota’s directive is likely to force the police to take up the case, as the Nepal Police is often reluctant to investigate cases of rape or sexual harassment on the grounds that a complaint has not been filed.

But in order to keep the pressure on the authorities, a second leg of the protest has been scheduled for 10 am at Maitighar on Saturday, May 21.

“One protest or social media attention is not enough. The feminist movement in Nepal, especially the #MeToo movement, has been limited to social media. That means it dies down as quickly as it escalates. But historically, the feminist movement has always taken place on the streets,” said Mulmi. “What the movement needs is sustained action. The first day was a spectacle of public support and outrage and we aim to keep it going.”

Nishi Rungta  Nishi Rungta is a Research and Development Officer at Pad2Go Nepal. Along with her part-time job here, she also co-runs a marketing agency and clothing label Lucid Inc.