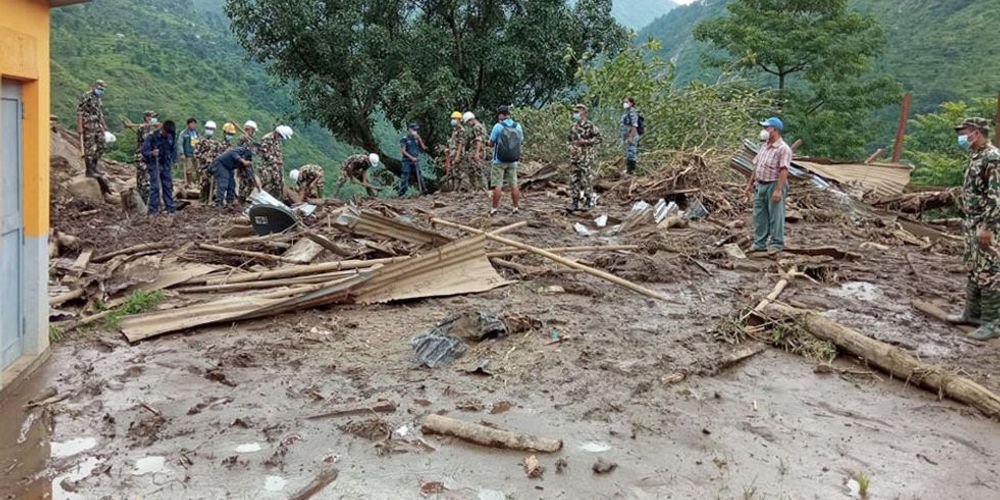 The locals of Bhirkharka and Nagpuje, in Baharabise Municipality, had never imagined that landslides would ravage their settlements as the area was considered much safer than the dozens of riskier settlements in Sindhupalchok District. They were also sure they were on safe ground because local authorities had not categorized their settlements as landslide-prone areas.

Thus landslides probably never crossed their mind as the villagers turned in for the night on Saturday evening. But some of those villagers never woke up the next morning, and some are still buried under debris. And most of their neighbours woke up in the early hours of Sunday morning to loud crashing noises generated by the series of landslides that wiped out most homes in the villages.

“Everything had been washed away when we woke up,” said Bir Bahadur Thapa, a local leader.

The landslides, which resulted from the heavy downpour created by a cloudburst, first swept away the villagers’ rice fields before sweeping away large parts of Nagpuje and Bhirkharka villages, said Anil Pokhrel, Executive Chief of National Disaster Risk Reduction & Management Authority.

According to locals, the landslides occurred around 4 am. Those who remain buried were in deep sleep when their houses were swept away. “The situation there is really terrible. And it’s difficult to retrieve dead bodies because they are buried under piles of debris,” said Pokhrel.

From early in the morning on Sunday, rescuers from security agencies and locals have been conducting rescue and relief operations. By the evening, they had retrieved the bodies of 11 locals, but at least 20 people still remain buried under the rubble.

According to geologists, Sindhupalchok has turned into one of Nepal’s most landslide-prone areas of late, especially in the period after 2015’s devastating earthquakes. Although landslide prevalence was high in the district even before the earthquakes, more and more devastating landslides have been occurring recently there now.

About a month ago, three dozen people were buried alive in the village of Lidi. A total of 17 instances of major landslides have occurred in the district this year, according to the National Emergency Operation Center.

In the aftermath of 2015’s earthquakes, seismic experts had recommended that many settlements in Sindhupalchok be relocated. But frustrated by bureaucratic red tape and lack of concrete relocation and livelihood plans, locals started to rebuild houses even in risky areas where the land had been destabilized by the quakes.

Today, because most quake-damaged houses in Sindhupalchok have been rebuilt, politicians representing the district have started to lobby for the creation of integrated settlements. “We need a comprehensive study about earthquake prevalence and plans for building safer buildings,” said Agni Prasad Sapkota, who reached the landslide-hit areas after the latest disaster. Sindupalchok is Sapkota’s constituency. “I will raise this issue with the prime minister as soon as I reach Kathmandu.”

Tuberculosis kills an estimated 17,000 people every year in Nepal, and with Covid-19 and the development of drug-resistant strains, this number is only likely to increase further.