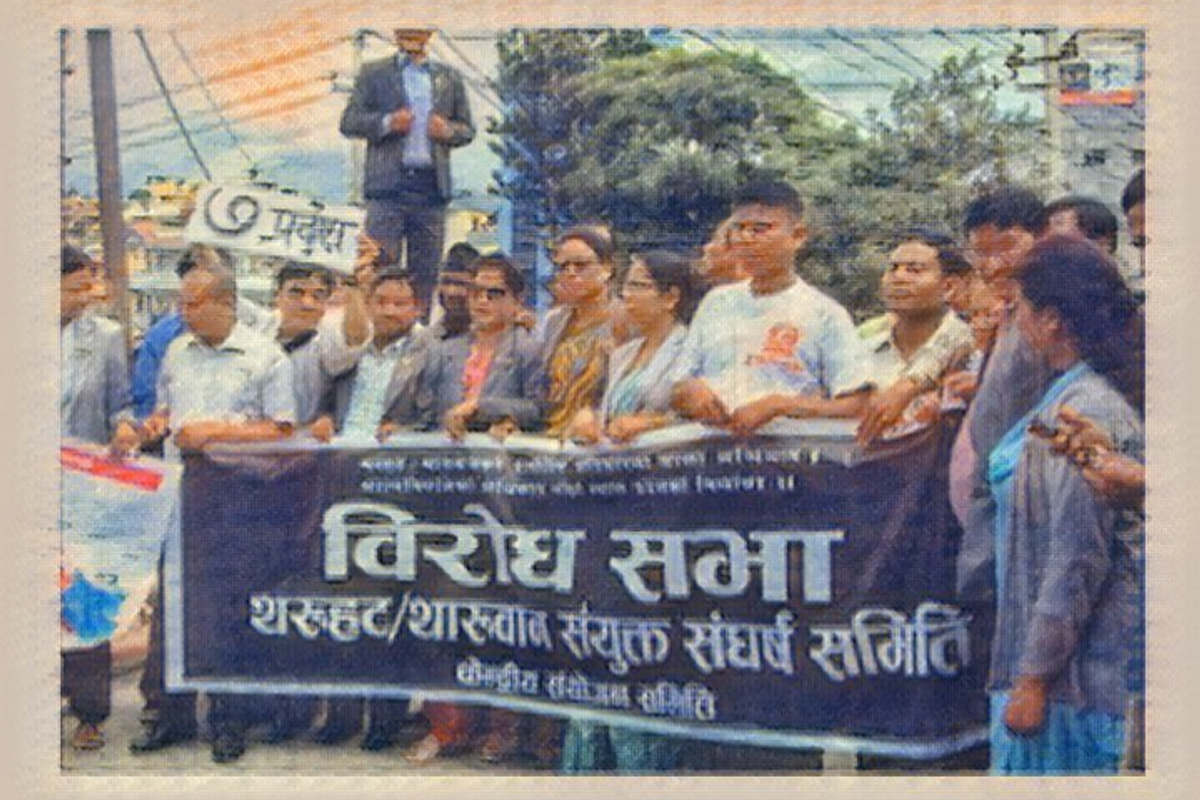 I was 16 years old in 2015. That was the year the new constitution was passed, but not before nearly 50 people had died in the lead-up to the promulgation of the statute. Back then, all I knew about Tikapur was that police officers employed by the state for the protection of its citizens had been killed by those very citizens. Even an innocent child barely two years old had been killed.

This was what the mainstream media had focused on and it was what I continued to believe until I started talking to my friends. I learned that I had not heard the full story and that my perspective, prompted by the media, was prejudiced. Ashamed of my own ignorance, I decided to visit the ongoing Tharu protests in Kathmandu and understand the Tharuhat Tharuwan movement.

When a draft of the 2015 constitution was released for public comment in August 2015, many people across the country were not happy. Ethnic Janajati groups were especially upset at the delineation of provincial boundaries and the number of provinces in the new federal set-up. Many of these groups started protests in the hopes that the government would address their demands regarding the boundaries. The Tharu community too organized itself under the Tharuhat Tharuwan banner and demanded a separate province for the Tharu community — one where they wouldn’t be in the minority to the dominant hill Khas-Arya community.

“Tharu people just wanted their demands heard, but the government rejected the people’s voices whereas they held discussions with the people of the same region demanding Akhanda Sudurpaschim,” Madan Chaudhary, a 32-year-old journalist, told me.

Akhanda Sudurpaschim was another political movement demanding a separate province in the Far West, the region where the Tharu people are concentrated. National-level politicians listened to the Akhanda Sudurpaschim protestors, who were mostly hill-origin Khas landlords as opposed to the Tharu who are a marginalized community indentured in the past to those very landlords. Tharu demands went unheard.

“Tharuhat Tharuwan is a political movement regarding the rights of an indigenous community,” said Madan. “It is not a criminal activity as was portrayed by the media.”

What happened during the Tikapur incident?

The Tikapur incident took place on August 24, 2015, after politicians had agreed to the demands of Akhanda Sudurpaschim to add one more province, bringing the total number to seven. Thousands of Tharu had gathered in Tikapur to protest. A small group of police personnel attempted to talk to the protestors when violence suddenly broke out. The police were overwhelmed by the protestors and in the ensuing clash, nine police personnel were killed. An 18-month infant child of a policeman was struck by a bullet and died on the spot. While such violence cannot be justified under any pretexts, the Tharu community has argued that the clash was spontaneous.

“The Tikapur incident was a reflection of the years of unfair treatment by the state toward the Tharu community,” said Urmila Gamwa Tharu, a 26-year-old researcher.

The security forces, including the Home Ministry, saw it differently. They believed that the violence was premeditated and proceeded on a campaign of mass retaliation against the Tharu community. In the immediate aftermath, a dozen Tharu homes and businesses were burned down in Tikapur. Dozens of Tharus, many of whom had no relation to the protest, were summarily arrested and jailed for years.

READ OUR NEWSLETTER: The trauma of Tikapur

Why are the Tharu still protesting six years later?

The Tharu community believes that it has been unfairly targeted by the security forces as revenge for the killings of the police personnel. Independent reviews have shown that many of those jailed for their roles in the killings were prosecuted on flimsy, circumstantial evidence and that the judges in the case were under public pressure to punish the people alleged to have been involved.

“The court even took the testimony of a child with a disability to convict people of the murder of police officers,” said Chandan Chaudhary, a software engineer. “This is not an issue of Tharus versus others. Even people from the Tharu community have died and have been shot. The Tharu community is not the murderer of a child or police officers. We just want our voices to be heard.”

What are the current demands of the Tharuhat Tharuwan movement?

The demands of the Tharuhat Tharuwan Movement are simple — the release of prisoners involved in the Tikapur incident and the public release of an in-depth report produced by the Lal Commission. Led by former Supreme Court justice Girish Chandra Lal, the Lal Commission was formed to look into instances of violence leading up to the promulgation of the constitution, including the Tikapur incident. The commission submitted its report in 2017 to then prime minister Sher Bahadur Deuba, who is now prime minister again. But despite a Supreme Court order, the report has never been released to the public.

The Tharuhat Tharuwan movement is also demanding that the state honor its past agreements with the Tharu community, including a promise to amend the constitution to address their demands for some semblance of autonomy.

Tharus argue that the Tikapur incident, like many other instances of violent protest in Nepal’s recent history, must be treated as a political incident rather than a criminal one. They point out that every political party currently represented in the federal Parliament has some history of violence in its past. The Nepali Congress took up arms in protest against the Rana regime, the UML was part of the Jhapa Uprising in the late 60s that beheaded landlords, the Maoists led a 10-year civil insurgency, and the Madhes-based parties led numerous protests as part of the Madhes Movement that resulted in violence.

“It was a political movement. Police officers have been killed in other political movements too,” said Madan Chaudhary. “Yes, over the years, the state has tried to give opportunities to the Tharu community but it has not been enough.”

Is the movement continuing?

The Tharuhat Tharuwan Rastriya Morcha organized a protest in Kathmandu in the week leading up to the anniversary of the Tikapur incident. They were supported by the Brihat Nagarik Andolan, a loose coalition of civil society members.

“The movement is ongoing,” said Dinesh Chaudhary, head of the Union Division of the Tharuhat Tharuwan Rastriya Yuwa Shakti, the movement’s youth wing. “You don’t necessarily have to stand with a banner to get your message across. The main reason we started the movement in Kathmandu was that anything that happens here tends to affect other districts as well.”

“We also have a literary event called ‘Tikapur Trauma’ if people want to express themselves through literature,” said Pranab Akash, a 27-year old director and writer.

When asked what non-Tharus can do to understand the Tharuhat movement, Urmila Tharu, the researcher, simply said that they should visit Tikapur.

“Go to Tikapur and look at the situation of the Tharu community,” she said. “When I went there to conduct research, people of my own community were afraid to talk to me about their experiences. They try to hide their bullet scars. They think it is useless to talk about their pain as they have not received justice.