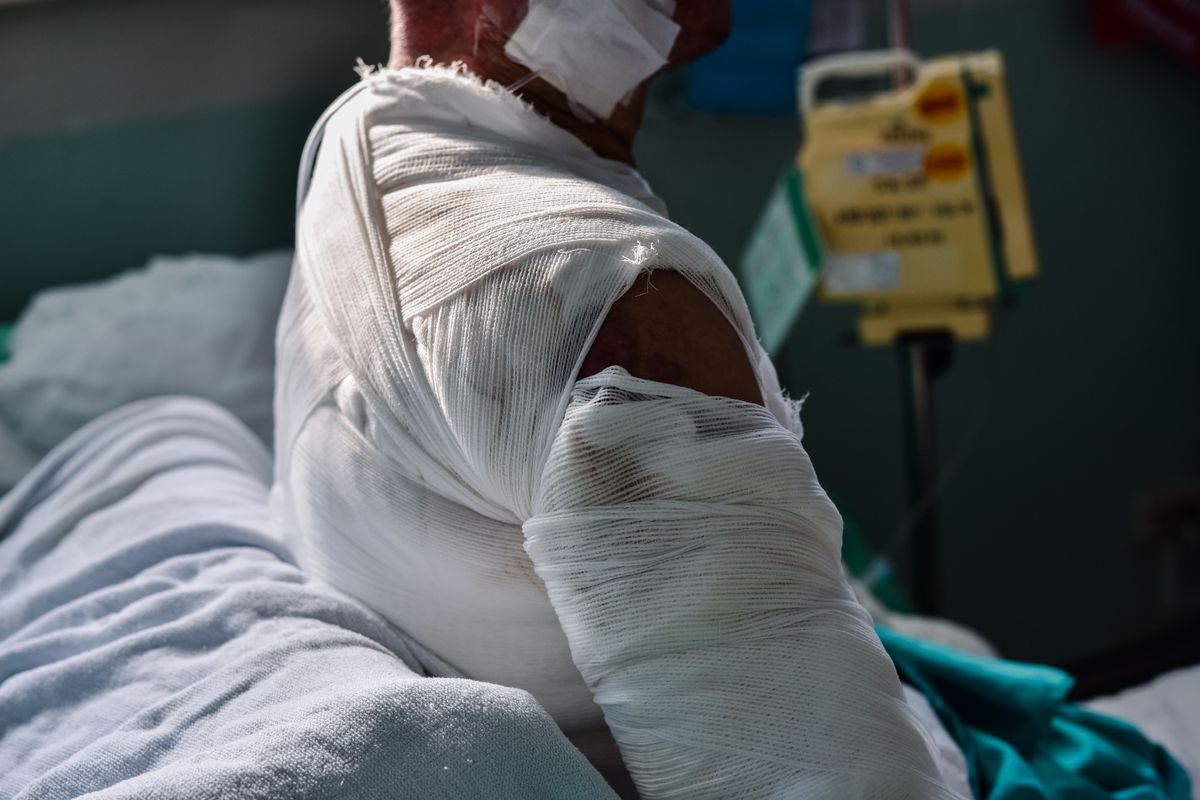 Shanta Tamang had never been to Kathmandu. She was born in Morang but lived much of her life in Jhapa, where she was married off. “People who had been to Kathmandu would tell me how crowded the city was, of the buildings and the traffic. They would come back home shocked because they had to pay money to drink water in Kathmandu. Hearing them talk, I would always wonder when I too would go to Kathmandu,” said Tamang, whose first name has been changed due to privacy reasons.

Tamang finally came to Kathmandu in 2013. Only, she came in the back of an ambulance, unconscious and with a majority of her body, face, hands, neck, back, and thighs burnt by kerosene.

“My husband and I would often get in fights. He would sometimes threaten to set me on fire and kill me, but I never thought he would actually do it,” said the 40-year-old.

For days after her husband attacked her, she was kept at home, hidden and without treatment. Then, her husband dropped her off at Bir Hospital. She has not seen him since.

For the next four years, Tamang saw little of Kathmandu except for the walls of the burns unit at Bir Hospital.

Tamang survived, but she is among the lucky few who do. There are many others who succumb to burn injuries every year. According to WHO, an estimated 180,000 deaths every year are caused by burns — the vast majority of which occur in low- and middle-income countries like ours.

In Nepal, experts estimate deaths from burns to range between 2,000 to 2,500; actual case numbers are much higher. Burns survivors recount excruciating pain that can last for years and life-long injuries and disabilities, alongside the scarring and deformity. Severe burns require immediate and extensive treatment, which most Nepalis cannot afford. There is little assistance available from the government. Existing Nepali law provides no compensation to victims of burn violence or burn accidents, and reparations are nominal.

Tamang had to undergo nine surgeries and spend years at the hospital. All of her bills were covered by local NGOs and private donors. She could not even take any legal action against her husband as that would’ve meant spending a lot of time and money circling courtrooms — both of which she could not afford.

“The government of the country must be held responsible for the health of its people. Unfortunately, till date, the government has done nothing to ease the pain of burn victims,” said Ujjwal Bikram Thapa, a social activist who has been working for the welfare of acid and burns violence survivors for the past seven years.

In Nepal, the only law that concerns burns violence is the 2017 Penal Code. Article 193 (1-3) prohibits “causing disfigurement by use of acid or other chemicals, biological or toxin substance, or throwing such substance on, that other person, or by burning, maiming, strolling the body with or applying to the body such substance or disfigure the face or any part of the body of that other person.” Anyone found guilty is liable to a prison sentence of three-to-eight years and a fine ranging from Rs 50,000 to Rs 500,000. Survivors, activists, and social workers say this punishment is not enough.

Last year, President Bidhya Devi Bhandari signed the Acid and Other Harmful Chemicals (Regulation) Ordinance, amending the Criminal Offence and Criminal Procedure Act, which will now require anyone to have a license for the purchase and sale of such products. Buyers need to submit their details to the Home Ministry within a week of purchase and sellers too must keep a record of buyers. The government is also providing lifetime employment for acid attack victims, along with medical, education, and living expenses. Four hospitals – Tribhuvan University Teaching Hospital, Bir Hospital, Patan Hospital, and Kirtipur Hospital – will have a dedicated unit for acid victims and will provide free treatment.

The ordinance was recently passed by Parliament, and while this is a big step in the right direction to provide justice to those who suffer from acid burns, the law does not take into account the pain of other burn violence survivors.

“The government has once again failed to take into account the pain of burn survivors. If we look at it from a psychological perspective, to burn someone — whether using acid or kerosene — is the last stage of violence. It is an intent to damage someone physically. Thus, the punishment should be the same. You cannot call this justice,” said Rumi Rajbhandari, founder of Astitva, a non-profit that supports acid and burn survivors.

According to Rajbhandari, the plight of acid survivors has received a lot of attention from the government and the media, but other burn survivors have been overlooked.

The 2015 case of Sangita Magar, who was just 16 when she was attacked by acid, received national attention. Magar went on to become an activist herself and lobbied for the ordinance that President Bhandari passed.

“We are all happy with the bill but we are confused and disheartened with the government’s decision to not include burn injuries,” said Rajbhandari.

Currently, the only way perpetrators of burn violence can be punished is by registering an ‘attempt to murder’ case or a domestic violence case. Either path is difficult and long.

“Because of this, a lot of survivors refuse to take legal action against their perpetrators,” said Rajbhandari.

Most burn violence cases occur in low-income families over issues like dowry, infidelity, and inter-caste marriage. The survivors of burns violence are overwhelmingly female while males suffer mostly from accidental burns. According to WHO, burns account for 5 percent of disabilities, the second most common injury in rural Nepal. But data on the actual number of cases is scarce. There are no mechanisms in place to keep track.

“Hospitals still use manual card systems and there is no central database for burn cases,” said Rajbhandari. “Burn cases are definitely in the thousands but many go unreported.”

Most cases go unreported as the majority of perpetrators involved are family members, relatives, or acquaintances. Many families refrain from reporting such cases out of fear for their reputation and their lives, according to Pratiksha Giri, executive director of Burns Violence Survivors Nepal. The lack of accountability and transparency is another cause.

But if a specific law were to be put in place to protect people, provide them with financial assistance, and criminalize the offense, such issues might cease to exist.

Let’s take the acid ordinance as an example. With the ordinance in place, acid cases went down dramatically, with only one acid case being registered in the past 10 months, said Thapa, who was on the committee that wrote the bill.

“We cannot restrict the sale of oil and kerosene, like we did with acid, because they are everyday commodities. But if there are laws in place that criminalize such violence then cases will decrease. If our laws were stricter, perpetrators would be scared, and people would be empowered to seek justice. If the government includes the word ‘burns’ in the bill, a lot of lives can be saved,” he said.

But weak laws are only a part of the problem.

In all of Nepal, there are only six hospitals that can treat serious burn injuries, and five of them are in Kathmandu. The other hospital is located in Nepalgunj.

“If 10 percent of a human body suffers burn injuries, they require serious medical attention. But there are hardly a dozen burn specialist doctors in Nepal and nearly all of them are in Kathmandu. If a person needs critical care, they have to come to Kathmandu. A majority of patients come from rural areas and many times, it is too late,” said Dr Peeyush Dahal, head of the plastic surgery department at the trauma center in Bir Hospital and president of the Nepal Burn Foundation.

Nepal’s public healthcare system is so inadequate that if a person with burn injuries to 30 percent of their bodies comes in, doctors have a tough time providing treatment.

“We do not have the facilities nor the trained manpower,” said Dahal. “If a massive fire breaks out somewhere and 50 people get injured, we will not be able to treat them. They will die.”

But a majority of burn injuries can be prevented. Developing proper information and awareness channels and building the capacity and human resource of hospitals to provide timely treatment can go a long way towards reducing injuries and mortalities. In 2020, neighboring India, which sees approximately 6-7 million annual burn incidents, rolled out its National Programme for Prevention of Burn Injuries, which also aims to establish a central burn registry.

Preventing accidents is one thing but preventing crimes is another. Here, strong laws that mandate steep sentences for perpetrators are critical.

“This new government can address all problems, including burn injuries, by amending the law. This is their chance to right wrongs,” said Dr Dahal. “Whether you are burned by acid or by fire, the trauma, pain, and treatment are the same. The right to live is a human right.”