Every year, cases of violence against women online are increasing in Nepal, and they have been made worse by ambiguously worded laws and policies and a general lack of public awareness. 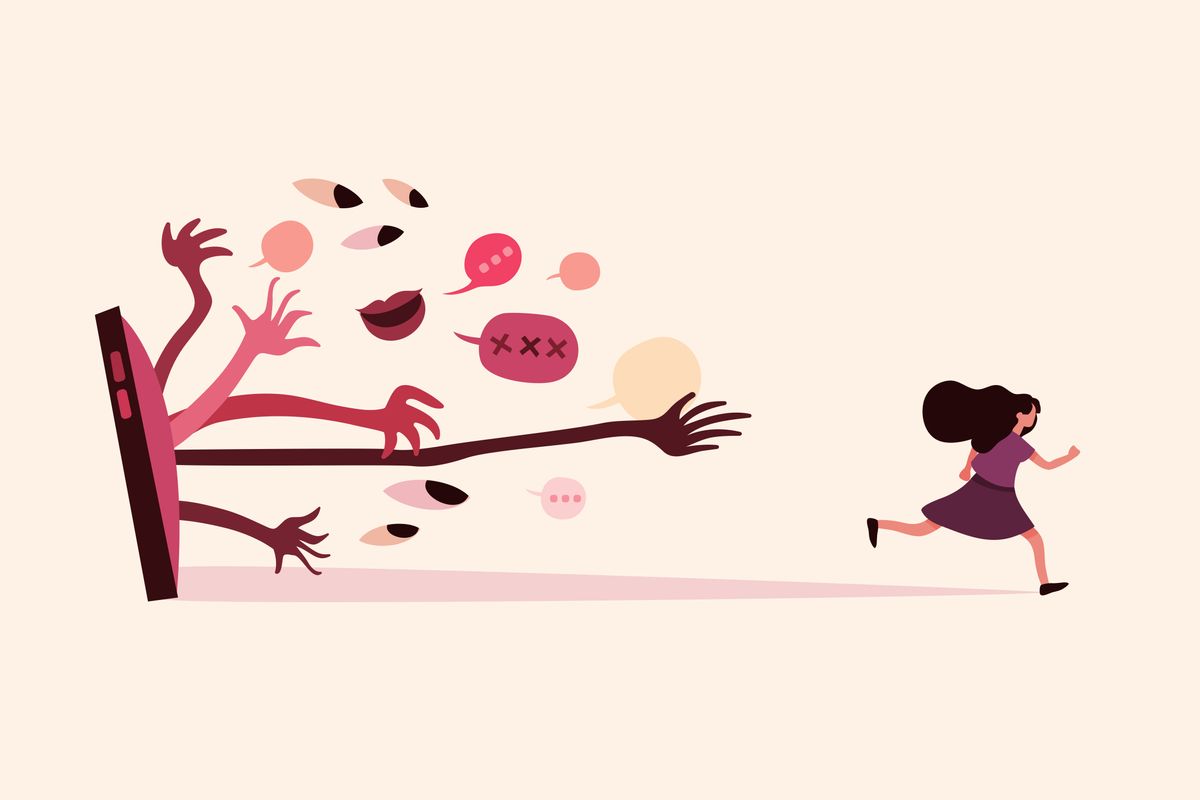 Around two years ago, 22-year-old Pooja Khanal was sexually harassed on Facebook by someone she knew from college.

“I had accepted his friend request considering he was my batchmate. The conversation had started normally but all of a sudden he asked me for nude photos of myself, which I denied,” said Khanal, whose name has been changed for privacy reasons. “However, he did not stop. He then started sending unsolicited pictures of his private parts.”

Khanal blocked his account on the social media platform. But he went on to create different anonymous accounts to harass her again and again, she said. It was only after Khanal addressed the issue with her classmates that he stopped harassing her online.

In recent years, such instances of women being subjected to harassment online have resurfaced time and again in Nepal. An OXFAM International study published in 2021 indicates that violence against women has moved out of the physical space and into the virtual realm, with reported cases increasing in cyberstalking, bullying and sexual harassment.

"Online violence is not a new kind of violence but an extension of the injustice that takes place in real life,” said Shubha Kayastha, co-author of ‘Mapping laws relevant to online violence in Nepal’, a recent report from Body & Data, a nonprofit, which explores the necessity of creating safe cyber spaces to curb online violence against women and the queer community.

The report analyzes how laws and policies related to the internet, technology, and gender-based violence can be instrumental in regulating and addressing online violence. It also provides a remedy to online violence through implementation of freedom of expression and right to privacy.

One of the reasons why such cases are increasing is because of the absence of a generally accepted notion of consent, in society and in law itself. The report highlights this by stating: “the law is made with a blanket approach which overlooks consent between individuals engaged in online communication.”

The report also analyzes various provisions related to online harassment existing in the Domestic Violence (Crime and Punishment) Act, 2009, the Sexual Harassment at Workplace Prevention Act, 2015, and the Electronic Transaction Act, 2007 — most of which has ambiguous language.

For instance, the report highlights section 47 of the Electronic Transaction Act, 2007, which consists of vague subjective words like “public morality, decent behavior”, which don't take into consideration an individual’s right to expression and consent among parties while sharing material that might be controversial to the rest of the population.

“These words in law are subjective by nature. They are based on the collective psyche of the morality of society. However, when it comes to online violence, this needs to shift to ad hoc, reciprocal consent-based morality,” said advocate Sachin Siwakoti.

When asked if ambiguity in law creates difficulty in providing justice to victims, Inspector Raj Kumar Khadgi of the Nepal Police's cyber crime bureau pointed out, “Creating a blanket provision to solve the issue and lack of specificity hinders equitable justice.”

According to Khadgi, another deeper issue that causes such cases to recur is that awareness regarding cyber crimes in Nepal is still minimal. When inspectors get deployed to the cyber division, they are often confused about what work the division actually does, he said.

“We have even had to help judges understand the terminology during testimony. Terminologies are difficult to understand and sometimes even lawyers don’t make the right call,” said Khadgi.

Society itself is unclear about what online harassment and violence entails, and how one can go about seeking remedy.

Talking about her own experience of being cyber stalked, Dipasa Bista, who leads the #NotAnyMore campaign, a social campaign which stands in solidarity against online sexual harassment, stated, “My experience with cyberstalking had left me anxious even while walking down the street. I would get messages from random accounts run by the same person but I didn’t go to authorities since I was pursuing my degree in Bangladesh at the time.”

“I didn’t realize I was being cyber stalked until the initiation of the campaign. When I look back at it, I feel we have normalized these behaviors online because we are still confused on who to hold accountable,” added Bista.

Considering how many young women have reached out to the campaign for advice, she has noted that the victims have common fear: “They question me on what if the person (the perpetrator) tries to rape or throws acid on their face?” she said.

Then there are issues of stigma and fear that come attached with taking action against someone, which prevents women from punishing perpetrators. Take, for example, last year's data, of the 3,000 plus cases that were registered, only 79 of the applications actually saw further processing.

“Victims usually want to settle the case of online violence through informal means, as they are afraid of scrutiny of law enforcement officials,” said Siwakoti. “Law enforcement doesn’t deal with victims uniformly. Some officials may handle complaints with ease, however some further disregard the status of the victim and question their character."

“We have found the perpetrator to be usually of the same family. Husbands and wives tend to create profiles to check the loyalty of their spouse. When it's a member of their own family, people usually reconcile and move forward,” noted Khadgi.

“There is nothing like prevention is better than cure in cyberspace. As soon as an individual shares anything to a person online, they fall under the risk,” said Avinav Neupane, final year student of BSc (Hons) in Networking and IT Security. “You will need to be updated continuously with the security system to prevent any kind of cyber attack,” added Neupane.

And in a majority of instances of harassment, often the one who is harassed is at the receiving end of questions, further victimizing them. “When questions like ‘why did you send those pictures?’ or ‘why were you not careful?’ are put forward to the victim, which further victimizes them and shifts the burden of proof of their innocence to the victim. Online based crimes should not be inquired from the aspect of why the victim was not careful,” highlighted Siwakoti.

It is necessary to take online violence seriously because most often than not these cases can cause real-life implications. “It can not only cause mental and emotional harms but there have been many instances of online violence moving to real life and causing physical harms and self-inflicted harms,” adds Kayastha.

As indicated by the Body & Data report, it is not enough for only the legal system to recognize online violence. The socio-cultural system of the country also needs to do the same. Development and provisions of immediate support mechanisms by the state for the protection of victims of online violence, including provision of shelter for physical safety, legal counseling and digital safety and security, should be the next step toward creating a safe digital platform. But all of it is currently a distant dream.

“Right now, we have laws like the Privacy Act 2018 and the Information Technology Bill 2018, which caters to protecting the privacy of those in power,” states Kayastha.

Until firmer laws and policies are in place that create a balance between the state’s restriction and individual’s freedom and protect everyone, despite their gender, class and caste, controlling online violence is challenging. “This can be achieved if the state mechanism understands the dynamic nature of morality. There should be a clear demarcation on what is legal and illegal and what is right and wrong,” said Siwakoti.