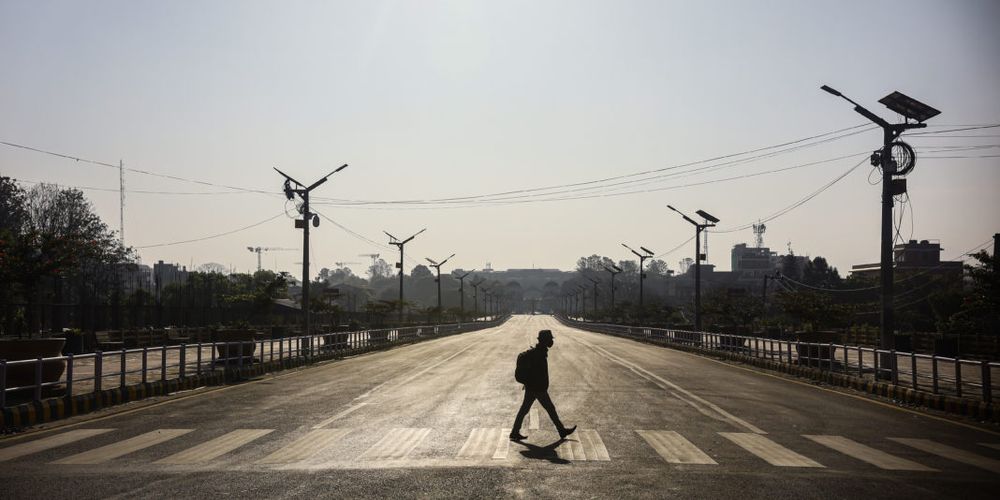 Hundreds of people are still stranded across the Nepal-India border in Darchula despite the government’s announcement to allow entry to Nepalis returning from India. For days now, local authorities in Darchula have prevented Nepalis returning from various places in India to enter the country, in what seems like an attempt to contain the possible spread of Covid19. Harrowing videos that have emerged on social media show stranded people chanting slogans against the government for restricting entry to its own citizens.

Tek Singh Kunwar, Darchula’s deputy chief district officer, told the Record that the stranded citizens will have to remain across the border until quarantine facilities are set up.

“We are working to build two qurantine facilities and that will take some time. Until then, we are coordinating with local agencies and businesses to feed the stranded and give them necessary protection,” said Kunwar. Authorities at other India-Nepal border points have been allowing entry to migrants returning in droves from various states of India.

Not all deaths are linked to Covid19, govt officials say

The Ministry of Health and Population has urged the media not to relate any and all deaths with the Covid19 pandemic. Speaking at a press conference on Monday, Dr Khem Karki, an expert with the ministry, said that the media’s attempt to link all deaths with coronavirus was fueling unnecessary panic in the public.

“Every death, irrespective of the cause, is being linked to corona. This is very sad,” Karki told reporters, urging the media to report only factual information. Karki’s remarks come at a time when the media is reporting a rise in the number of unexplained deaths in hospitals across the country. On Monday, two people died while receiving treatment for flu-like symptoms at Bir hospital. As of 20 March, only five cases of Covid19 have been diagnosed, according to officials.

A day after the arrival of a batch of medical supplies from China, the government on 30 March sent Covid19 test kits and necessary medical items to all seven provinces. The supplies were ferried using choppers belonging to private airlines as well as the Nepal Army. Bikash Devkota, spokesperson of the Ministry of Health and Population, told the Record that the supplies would be rationed by the provincial governments. Health facilities across the country have been reporting a shortage of basic medical supplies and protection gear which they say has interfered with their ability to provide regular and emergency health services.

Govt to provide food and other subsidies to those affected

The government has directed local governments to distribute food to those whose livelihoods have been affected by the Covid19 related economic meltdown. Food distribution is one of several measures that are being introduced by the government to protect the economically marginalised who face a greater brunt of the nationwide lockdown.

Other measures include subsidies on electricity, telecommunication and essential commodities sold through public corporations. Similarly, import tax on medical equipment and kits have been removed. The government has also directed schools not to charge school fees for a month while landlords have been urged to refrain from taking rent from the poor.

Deadlines for businesses to pay income tax as well as other taxes have been extended, while all have been directed to pay outstanding salaries to their staff. In order to boost the morale of health workers, the government has announced an insurance coverage of Rs 2.5 million to each health professional providing front line services to Civid19 affected patients.

Some politicians, including Nepali Congress leader Ram Chandra Poudel, have expressed doubt over the government’s ability to actually implement these plans.

The Nepal Police has come under intense media scrutiny for a purported case where its staff forcibly punished a man for defying lockdown restrictions.

“We have received complaints on social media that our staff have made a layman sit on the road, forcing him to carry a gas cylinder. The Nepal Police headquarters has taken this seriously and has been carrying out necessary investigations on the matter,” Nepal Police tweeted from its official handle on Sunday afternoon.

Deceased from Butwal cleared of Covid19

Amid speculations that a youth may have died of Covid19 while receiving treatment in Butwal on Saturday, test results have shown that he had no exposure to the virus, according to Dr Basudev Pandey, chief of Department of Health Services Epidemiology and Health Control Division under the Ministry of Health and Population. The deceased, identified as Baburam Thapa of Palpa, was a migrant worker who had recently returned from the UAE. He passed away while being treated for flu-like symptoms at a special health facility opened for the treatment of coronavirus patients. MoHP also said that tests conducted on relatives of the deceased for Covid19 showed negative results.