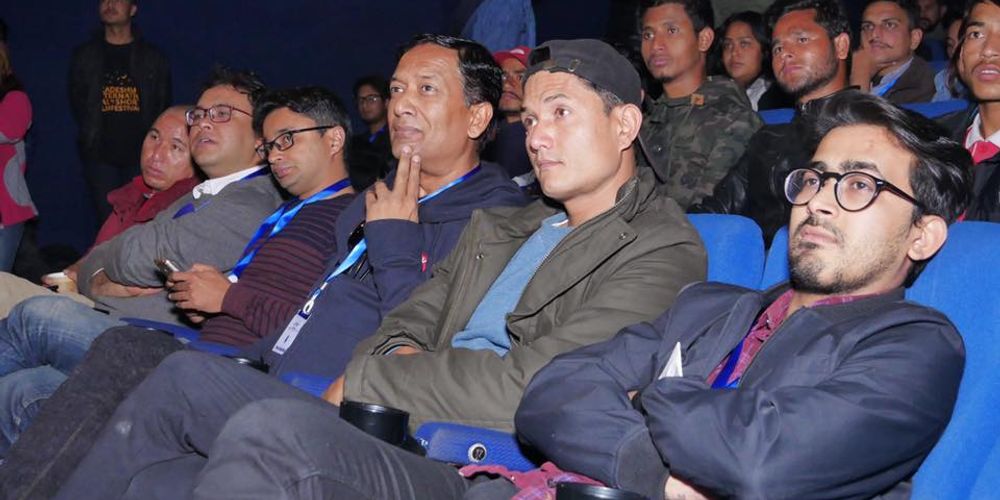 In a barely existent Nepali film scene, an annually held international short film festival is making an attempt to stir things up through its thematic, content-specific selection of films and film-making activities in Kathmandu.

This year, the festival’s theme was based on women and gender. A special section titled Power, consisting of 18 films, addressed women’s issues and had five Nepali films, out of which four were made by women filmmakers.

“Having a special section at the festival was very motivating,” says filmmaker Sujata Gurung whose film Ruwa was a part of the selection. “Women hardly get the opportunity to put forth their perspective on things. It is inspiring that the event created space for women.” She says the festival has motivated her to continue experimenting and making use of cinema as a medium for initiating dialogue on social issues.

A panel discussion titled Women in Films was also held on the third day. Moderated by Saguna Shah, the talk saw panelists Ramyata Limbu (KIMF organizer), Sampada Malla (Filmmaker), Richa Sharma (Actor) and Menuka Rai (Art Director) interacting on a range of topics: representation of women in films, the involvement of women in the production of media and the need for political correctness in films.

Ms. Limbu praised the organizers for their selection of films within the Choice section. “Most films depicted women who made an effort to respond to the situation that they were in. They took action and made their own choices,” she said. She further went on to add that Nepali films, and a lot of films around the world, tended to compartmentalize women and project them as one-dimensional characters. “If we acknowledge that film as a media reflects society and is a powerful tool for change, then, more Nepali filmmakers should opt for multi-faceted women characters. This will be something that the audience, especially the younger ones, take home.”

There were two other panel discussions—titled Opening Doors and South Asian Cooperation—that were held during the three days of the festival. The organizers say that the main idea behind the festival and its programs is of promoting, skill building and inspiring a new generation of filmmakers.

Paolo Bertolin, a visiting jury member of the festival, said that the variety of films shown during the festival would give filmmakers the opportunity to find out what kind of cinema is being produced in terms of narrative and stylistic choices around the world.

“Attending such a festival can be an eye-opening experience, this provides filmmakers with a much more complex range of possibilities.”

Ekadeshma also organized a Script and Project Development workshop as part of Ekadeshma Film Lab. The four-day workshop introduced filmmakers to the entire process of film-making and planning, from developing the script to pitching it to prospective producers. The Ekadeshma team also organized Pitch Beat where they fixed meetings for young filmmakers with Nepali producers, to get first-hand experience in pitching film ideas.

Prachanda Shrestha, film distributor and an organizing member of the festival, says “It’s difficult for a young filmmaker to pitch a film idea without exercise. Such practice guarantees a higher chance of landing a project deal. Participants will definitely have long-term benefits.”

Filmmaker and Ekadeshma Selection Committee member Min Bahadur Bham says that it is integral for filmmakers to work on script treatment, synopsis writing and proper budgeting. “Unfortunately, there are so many parts within the pre-production process that films often don’t go through; all these elements are very important for creating a good film and landing a production deal. Irrespective of whether the film ideas of Pitch Lab participants get produced or not, what is important is the knowledge and experience they gather”. Speaking of future possibilities of Nepali filmmaking, Mr. Bham added, “Our films don’t compare internationally, but that does not mean we do not have a unique identity. Technicality is something that can be improved on; what we need to focus on is telling good stories. With all that is going on in our society, we need to work with what we have. It is great to start out with short stories. Filmmakers can learn much out of it.”

Ekadeshma 2017 — Let there be Light, Trailer

Death of a Reader a film by Mahde Hasan

Nhooja Tuladhar  Nhooja Tuladhar is a Kathmandu-based artist and writer. He is a regular contributor for The Kathmandu Post daily and is affiliated with production house Fuzz Factory and artist collective Guthi.

Rajbhandari’s artworks reflect not only her evolution and range as an artist but also her ability to combine emotions with core art forms.

Looking back to keep looking forward

The Kathmandu Triennale 2077 attempts to delineate the concept of time, explore the fluidity of identity, and celebrates art in all its forms.