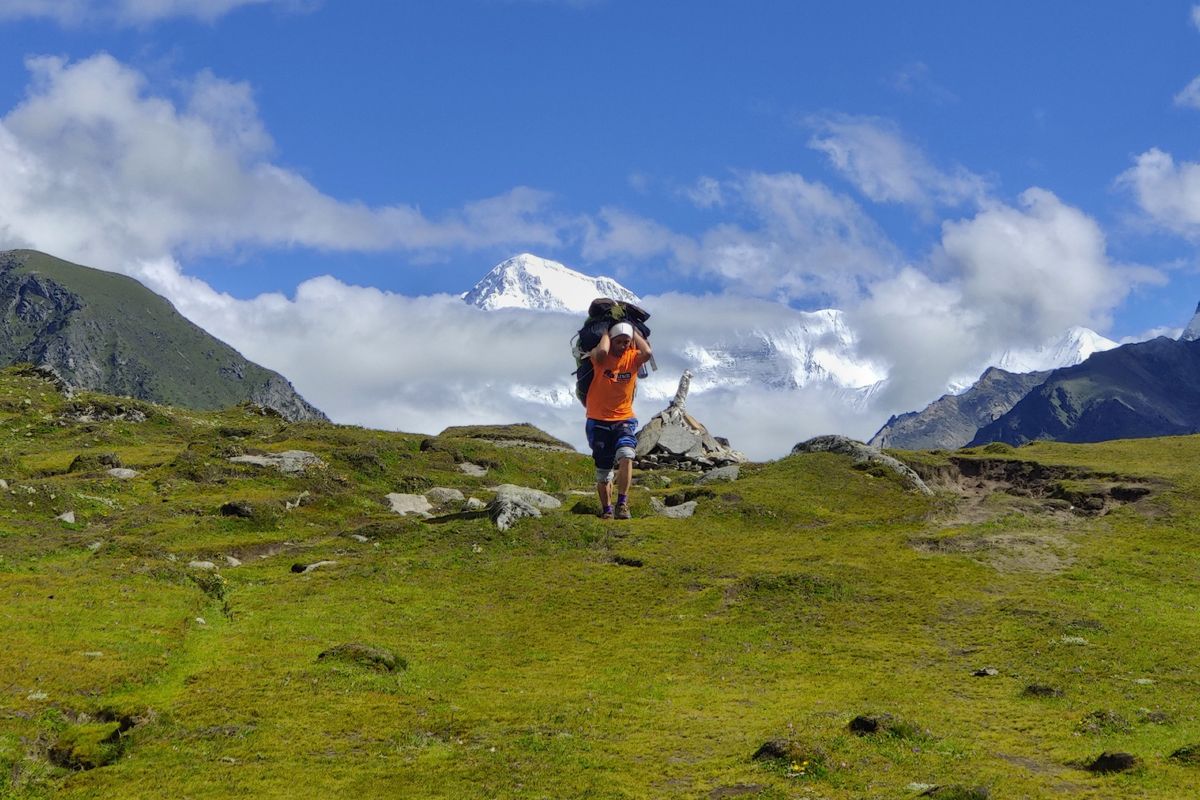 LUKLA — Kanchha Kulung has been a porter for nearly 18 years, whether carrying trekking gear for mountaineers to Everest Base Camp or just transporting goods from lower altitudes to villages higher up where roads don’t go. Although it wasn’t much, the money he made was enough to pay his rent, feed his family and send his children to school. But when the Covid-19 pandemic struck last year, Kulung suddenly found himself in dire straits. Tourism came to a halt and all public movement was prohibited in a country-wide lockdown that lasted for months.

“A few months ago, I ran out of money to buy rice and clothes for my seven-year-old daughter and pay rent for my room here in Lukla,” said 32-year-old Kulung. “Had it not been for loans from my family and friends, things would have become very difficult for me. If things continue like this, I don't know what I am going to do.”

Kulung is one of an estimated 5,000 porters who work primarily in the Everest region. During climbing season in the spring and autumn, the work can be lucrative, as trekkers and climbers require the services of porters to transport their gear up to Everest Base Camp. From base camp upwards, specialized high altitude porters and climbing guides take over.

But with tourism all but at a standstill, porters like Kulung have found themselves out of a job and teetering on the edge of poverty. Many of them don’t have any other skills. Kulung himself started carrying heavy loads at around 14 years of age when he was in the ninth grade.

For the time being, Kulung has found temporary work as a construction laborer in Lukla that pays around Rs300 per day. It's strenuous physical work and the wages are lower than being a porter for tourists, but he has to do something. If tourism doesn't pick up soon, he plans to move back to his village in Chheskam in the lowlands of Solukhumbu district.

Kulung first heard that the coronavirus was spreading in Nepal in April last year. "We didn't know what it was, how it looked,” he said. “We just knew that people were dying. We were very scared.”

A few days later, the Nepal government announced one of the largest and strictest lockdowns. Thousands of daily wage workers were stranded in the cities without wages, food, or shelter. All forms of public transportation — air and road — were suspended. The lockdown, initially scheduled to last a week, was extended again, and again, all the way through August. With no end to the pandemic in sight and no roadmap for recovery, the tourism sector looked at a prolonged slump.

​​According to official data, only 230,000 tourists visited Nepal in 2020 — lower than during the long stretches of the Maoist conflict and during the earthquake-blockade of 2015. The porters, who are often exploited and discriminated against in the tourism industry, carried the heaviest burden of the shutdown. Most porters in the Everest region are migrants from the lowlands — Rais, Limbus, and Chhetris from the villages of Chheskam, Bung, and Soti. Many women and children as young as 11 had migrated to Lukla from these villages in search of work. The lockdown forced them to go back to their villages empty-handed. 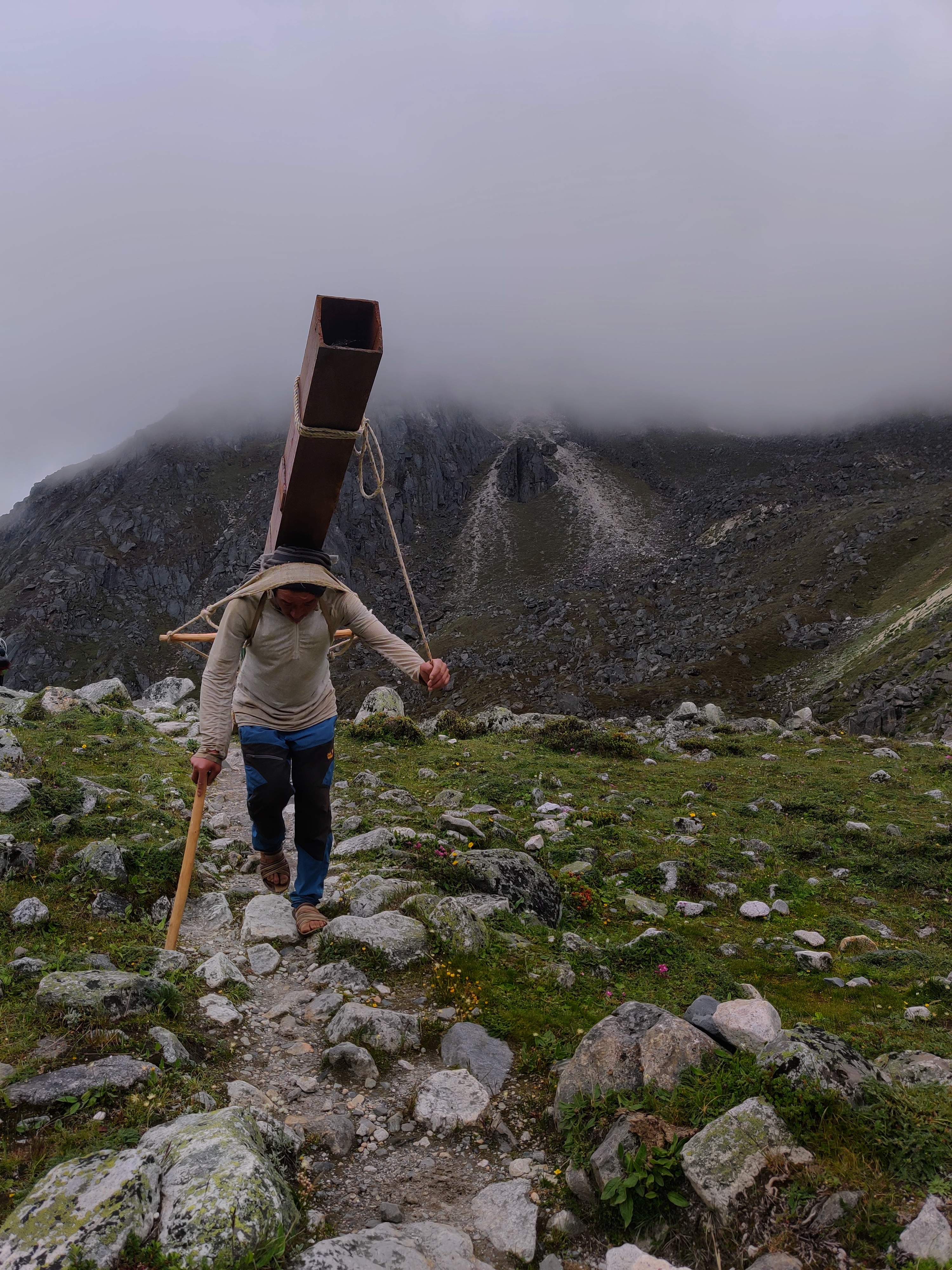 Jangbu Lama of Bung is another of the thousands of porters in Nepal who have been unemployed for over a year now. With more than two decades of experience as a porter, he is the sole breadwinner for his family. Lama says he hasn't seen a crisis as bad as this one.

When the government announced that Nepal would reopen to international trekkers in October 2020, Lama decided to risk it all over being indebted. He was afraid that carrying loads to higher altitudes amidst the coronavirus would risk his and his family's health but he had little choice in the matter. Most porters like Lama do not have medical or evacuation insurance when they fall ill during their work.

However, although regular international flights restarted in October last year, there was no significant uptick in the number of tourists.

“In any given year, I do around 10 treks, five each during the spring and autumn trekking seasons. However, in the last trekking season, there were limited jobs. I could do only one trek to Everest Base Camp before a lockdown was announced again,” said 37-year-old Lama.

Nepal once again went into lockdown in March earlier this year as the second wave of the coronavirus began to ravage the country. The tourism sector, which had hoped to bounce back in the spring, found itself stymied once again.

To scrape together a living, Lama has settled for doing odd jobs in the village. He hasn’t found anything yet that can provide him with a stable income.

“Porters are seasonal, informal workers who are heavily reliant on tourism. During the off-season months, they work as farmers, painters, and construction laborers in nearby towns and take up any available jobs in the village. But their quality of life is mostly dependent on seasonal tourism,” said Khum Bahadur Subedi, president of the Trekking Agencies Association of Nepal (TAAN). “The abrupt halt in tourism has pushed thousands of porters to the margins of poverty.”

Most porters do not have savings or alternatives that they can turn to. On average, daily expenses for porters hover around Rs 1,200 a day while they make about Rs 1,500. After crossing 4,000 meters, the daily wages are often spent on day-to-day expenses, forcing them to rely on tips from clients to make ends meet.

In addition to the job cuts, their plight is exacerbated further by the lack of basic social protection. There are thousands of unregistered porters who work informally and thus are not covered by their employer’s insurance plans. Porters also face financial pressures to continue to work despite injuries and illnesses, as they are often the sole breadwinners for their families. An international protocol advises a maximum weight of 20 kgs, but porters often end up carrying double or triple this limit on a regular basis.

“We have failed to value our porters,” said Subedi. “The absolute lack of regulations for porters at the state level has impacted their well-being during the pandemic in tragic ways.”

According to the Kathmandu Environment Education Project (KEEP), a non-profit that has provided training and education to over 3,000 porters to help protect their rights, thousands of trekking porters are currently living under dire circumstances and have sought assistance.

“The government has completely neglected porter's rights during this crisis,” said Bimal Naharki, chairperson of KEEP. “Relief materials from international and national organizations only reach a few as there is no working mechanism to track how many porters have lost their jobs so far.”

Porters have long carried the weight of the tourism industry and perhaps it is time that the industry and the government — both of which have benefited immensely from their work — give back.

For now, porters like Kulung and Lama, who have both been vaccinated, have no option but to work whatever jobs they can find. Kulung made Rs 20,000 from the only portering job he found last year, carrying bags for two trekkers through the Renjo La in the Everest region. He feels at home in the mountains but the pay is meager and he is worried about the effects on his health. Still, he hopes to be able to summit peaks one day.

“The vaccination is hopefully going to restart things the old way, but will it ever get better for us?” he asks.

This story was produced with the support of a reporting grant from the National Geographic Society.

Tulsi Rauniyar  A bit about me, I'm a freelance journalist and photographer based in Kathmandu, Nepal.