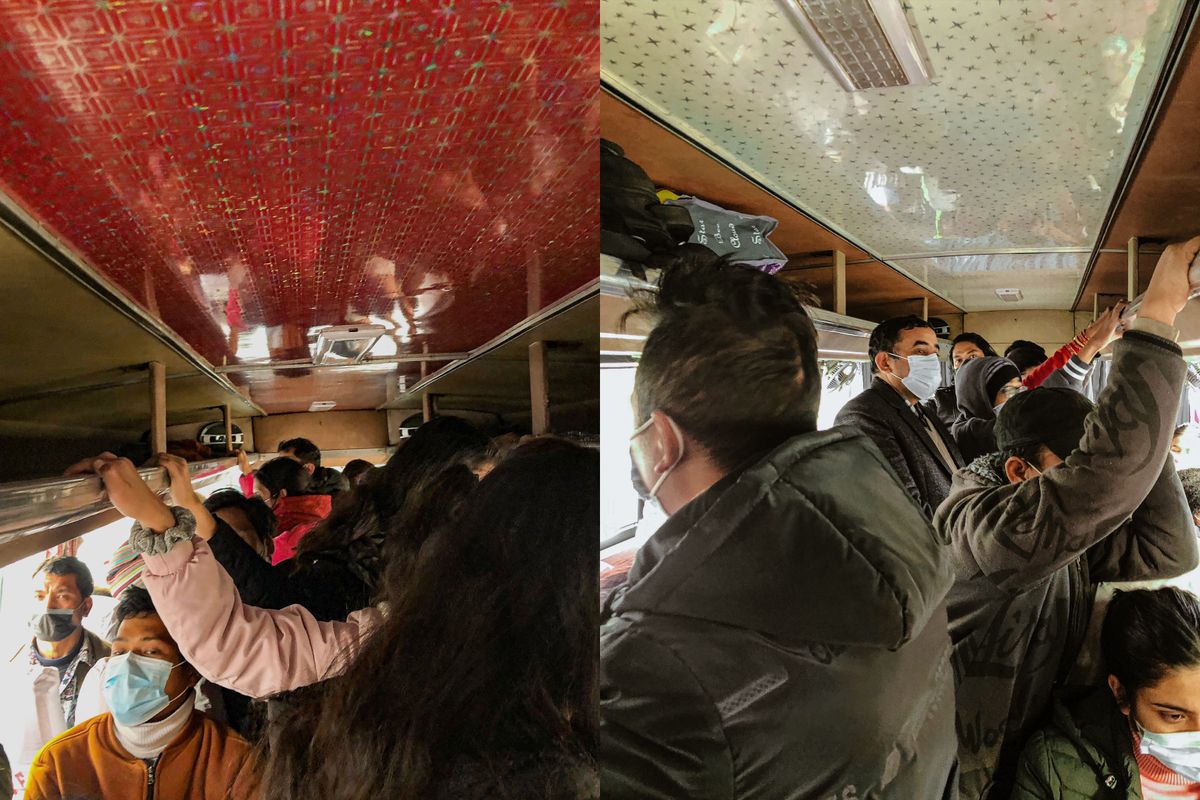 Although the decision has halved the number of vehicles on the roads, commuters say the rule has caused crowding in public conveyances, increasing their chances of contracting Covid-19 even more. (All photos: Aishwarya Baidar)

The confines of a cramped microbus is something many Kathmandu residents know too well. If you manage to get a seat, you're lucky but if you don’t, then traveling from one place to another in a public vehicle in Kathmandu valley can be a grueling experience. From potholes that violently jolt your whole body, stirring all of your insides, to the jarring noise of incessant honking during traffic congestions, commuters face a lot just to reach their destinations.

And the third wave of Covid-19 has only added to the struggles of commuters. The odd-even number plate rule has been re-introduced in Kathmandu Valley starting last Friday, January 21, in a bid by the chief district officers of Kathmandu, Lalitpur, and Bhaktapur to control the soaring number of Covid-19 cases in Kathmandu and the nation. And the rule is causing much distress for the people.

As per the rule, vehicles with odd-registration numbers will operate on odd days (according to the Nepali calendar date) and ones with even registration will run on even days. The rule applies to both public and private vehicles.

Although the decision has halved the number of vehicles on the roads, commuters say the rule has caused crowding in public conveyances, increasing their chances of contracting Covid-19 even more, as the poorly ventilated and suffocating public vehicles leave little space for social distancing.

“It’s harder to find a seat on the bus nowadays. The roads have less traffic, but offices aren’t closed, and everyone needs to get to work at the same time,” said 32-year-old Gyanu Lama, who had been waiting for a bus at Boudha.

She was returning home from her bakery classes but finding a bus has been more challenging due to the odd-even rule, she says.

Twenty-nine-year-old Sabina Gwaemasyu, who was waiting at the bus stand of Chardobato, Madhyapur Thimi, to go home, said she had no other option than to use the public bus to go to work because she doesn't have the luxury to work from home or take another, safer means of public transport because it would be too costly.

All the commuters The Record talked to shared almost the same plight.

“If we need to go anywhere, we need to commute in crowded vehicles,” said 42-year-old Sharmila Pandey, a shopper who was waiting for 3o minutes at the Ratna Park bus station to return home during the evening rush hour.

“The government says that we shouldn’t make a crowd because of the coronavirus, and yet they also make the odd-even rule,” she said.

Pandey says she feels more at risk of being infected with the virus now, as commuters have to settle for half the number of vehicles.

“I don’t know why the government would enact such a rule,” she added.

According to the rules set out by the three District Authority Offices, public transport will be barred from carrying passengers above its capacity. It also made it mandatory for drivers and co-drivers to wear masks and face-shields and sanitize their vehicles. It also instructed drivers and co-drivers to not allow in passengers without face masks. But the rules have largely been flouted.

Twenty-two-year-old engineering student Sandip Adhikari also expresses his doubts about the government’s decision to enact the odd-even rule as an effective preventive measure.

“Just reducing the number of vehicles on the road doesn’t reduce the number of commuters,” said Adhikari, who had been returning home from attending a practical class at Pulchowk Engineering Campus. Although his lectures take place virtually, Adhikary needs to be present for practical classes physically, he said.

“I couldn’t find a vehicle in the morning due to this rule so an acquaintance dropped me off in their private vehicle and, now even in the afternoon, I am still finding it difficult to get a vehicle to return home,” said Adhikary, who had been waiting for 20 minutes for a bus at Ratna Park bus station.

“The government should focus on high vaccination drives with proper management rather than the odd-even rule,” he added.

Prior to this, in a bid to contain the spread of Covid-19, the government also closed cinemas, gyms, clubs, swimming pools and futsal courts among other public spaces until January 29.

At 100,000 cases, the coronavirus pandemic in Nepal appears nowhere near ending