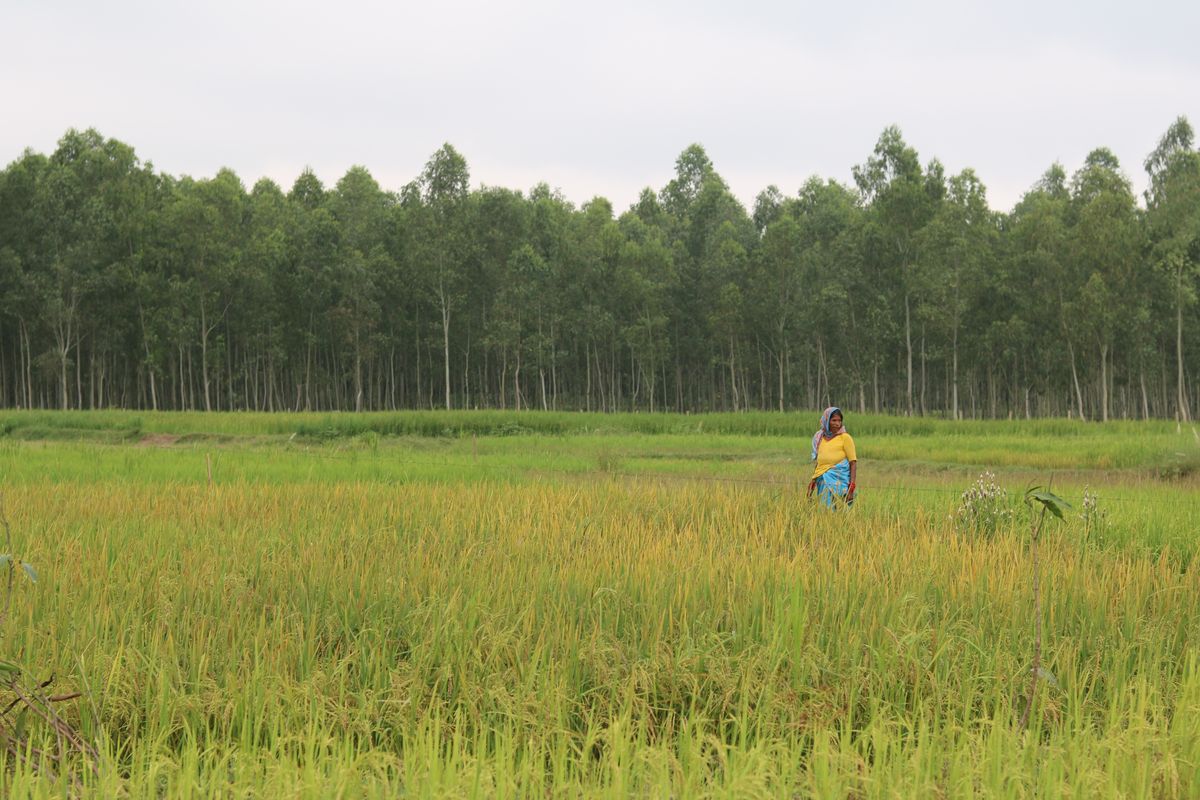 Summers are unbearably hot in Mahottari. When the sun is high and the air is heavy with humidity, the streets are all empty. To beat the heat, buffaloes and pigs lie in puddles, the mud soothing their skin. Villagers finish chores and gather under the shade of massive banyan trees.

But even in this unrelenting heat, Ragina Khatun comes to tend to her field almost every day. Near the river Marha, in Gaushala Municipality, Khatun owns 24 kathas (8,126 square meters) of land on which she has planted paddy. Come October, she will be harvesting rice for the first time in her life.

“It won’t be much but it will help feed my family,” said 60-year-old Khatun, who has 15 family members — her husband, four sons, their wives, and six grandchildren.

Khatun lives in Jalil Tole, in ward number 10, where a majority of the population belongs to marginalized communities like Muslims, Musahars, and Dalits. Khatun is Muslim, uneducated, and has worked all her life as domestic help. Her husband is too old and too frail to work anymore, she says. One of her four sons is working in Saudi Arabia at a construction site. The rest earn when they find labor work. For sustenance, Khatun only has her field, a buffalo, and a few goats.

But just a few years ago, Khatun didn’t even have her field. The land on which her rice field stands today was barren, filled with rocks and other sediment washed down by flash floods, which occur regularly in the Tarai.

“It took me almost seven years of labor and many more years of savings to turn this barren land into a field,” said Khatun.

Khatun is not the only person who is making use of the riverbed. Since last year, with the help of the local government, almost 60 hectares of the Marha’s dry riverbed have been converted into agricultural land, engaging over 300 households in the area in farming. On these fields, besides rice, saplings of mango, litchi, lime, and papaya have been planted in a multi-layer farming technique to help these marginalized farmers make a living, and also to make the land more fertile and resilient to floods.

Khatun too is planning to plant mango saplings on her rice field, as the fruit is more profitable. She is hopeful about the future but she also worries that the river will destroy her field. Floods are an annual occurrence in Mahottari and they have only been exacerbated by climate change. While dry riverbed farming helps farmers build economic resilience, it does not provide a long-term solution to the effects of climate change. Farmers like Khatun still remain highly vulnerable to natural disasters and the increasing effects of climate change.

“You never know when the water will come rushing in. Right now, the river is completely dry, but once it rains, the water rises without warning,” said Khatun.

The Marha is a seasonal river that is prone to flash floods during the monsoons. According to locals, however, the river once flowed year-round.

“When I was a young girl, the river was very different. It was shallow and flowed all year through the paddy fields,” said Khatun.

Over the years, however, as flash floods started to recur, the river began cutting into its banks and its bed has today expanded to almost triple its size, say locals. It is on this riverbed, left behind by the once-swollen river, that farmers like Khatun raise their crops. But because they farm on a riverbed, there is the constant threat of flooding.

When it comes to natural disasters, Nepal is a geographical hotspot, owing to its rugged topography. The Nepal Disaster Report 2017 states that “more than 80 percent of the total population of Nepal is at risk from natural hazards, such as floods, landslides, windstorms, hailstorms, fires, earthquakes and Glacial Lake Outburst Floods”. The report also states that disaster data from the last 45 years indicates that disasters have been growing in frequency every year, something that the residents of Gaushala Municipality have witnessed in the past decades.

Bimala Kumari Khapsagey has witnessed this firsthand. For generations, her family had been farming in Gaushala, but in 2003, a flash flood washed away four kathas of their land. The flood left her with just two kathas, where she planted sugarcane because the crop requires less water and less labor.

“We were able to earn around Rs 20-25000 per year, but it wasn’t nearly enough to feed the family,” she said. Her husband used to work as a laborer in India but for the past couple of years, he too has been out of a job.

“For the first time in 12 years, we have been able to plant rice this year,” said 55-year-old Khapsagey, who has been given five kathas under the government’s riverbed revitalization program. Rice plantation has only been possible this year because it rained a lot. In some areas, it rained so much that it caused a major flash flood in the nearby Ratu river inundating hundreds of houses.

Environmentalists attribute much of the Tarai’s floods to deforestation in the Chure hills.

“We cannot explain floods in the Tarai without looking at the Chure range. Deforestation of the fragile Chure hills has increased sediment loads of seasonal rivers, causing them to flood downstream in the Tarai,” said Arun Bhakta Shrestha, senior climate change specialist and program manager for River Basins and Cryosphere regional program at the International Center for Integrated Mountain Development (ICIMOD).

But extreme precipitation, which is being witnessed across the country, is also another reason, says Shrestha.

According to a report by the government’s Department of Hydrology and Meteorology which analyzed data from 1971-2014, Mahottari is among four districts reporting a significant increase in precipitation levels. Environmentalists believe that this increase in precipitation is the result of climate change, which is leading to more extreme weather events across the globe.

“Environmental degradation and climate change both interact with and exacerbate the occurrence and impact of natural hazard events. It is without a doubt that frequent disasters caused by these hazards have been increasing in the past few decades,” said Vijaya Singh, assistant resident representative and resilience advisor at UNDP. “The IPCC report too shows a direct correlation between floods and global warming around the world, and Nepal is not an exception. The signs of escalating climate change can no longer be ignored.”

And while the ramifications of global temperature rise are being felt the world over, the effects will be felt much more by poorer countries like Nepal, which ranks 10th in terms of climate risk globally, according to the Global Climate Risk Index 2021. The communities most vulnerable to climate change are often those who depend solely on their surrounding natural resources, like the people here in Gaushala, but particularly the women who remain in the villages and take care of their families while their husbands and sons leave for work.

“The people who live and farm near these flood-prone rivers live here not out of choice but out of compulsion. These highly economically vulnerable people do not really come under the government’s priority. They will sadly always be at more risk to the effects of climate change than others, no matter how hard they try to cope,” said Singh.

In nearby Kusmadi, a majority Magar village, the experiences of the local women are the same. A small plot of land, around four kathas, that Shanti Sah’s family owned was washed away by a flash flood almost seven years ago.

“Now the river runs on the land that was once my field,” said 65-year-old Sah, who has two sons, five daughters, and a husband.

Sukuri Maya Balampake, 55, too has witnessed the Soni river sweeping away fields. She’s been living in Kusmadi for the past 35 years, ever since she got married. And in the three decades she’s lived here, she’s seen countless floods, increasing in frequency in recent years. In the last two years alone, 10 kathas have been swept away by flash floods.

The flood that affected her family the most was one that came nearly 40 years ago, she says.

“My father-in-law used to tell us about the flood that swept away around five bighas,” she said. A flood of that size has not arrived since but she says she has definitely witnessed anomalies in the weather, including summers becoming extremely hot.

According to the same Department of Hydrology report, data shows that the highest significant positive trend (0.031 degrees Celsius per year) of temperature rise in the country has been observed in Mahottari district.

“I don’t remember it being this hot. We could walk around without chappals; now we can’t do that anymore,” said Balampake.

But the primary issue remains rain.

“Every Asar, it would rain enough that we could plant rice. But rain is inconsistent now. Take last year, for example, it rained a little in Bhadra and then directly in Baisakh,” she said.

Only people who can afford to dig deep boring wells can plant rice in Kusmadi. Poorer residents have to rely on rainwater to irrigate their fields. Last year, when the rains were scant, Balampake planted maize, which did not grow either.

But this year, farmers in Kusmadi are more hopeful. Here too, the local government has converted 50 hectares of riverine land into agricultural fields where women farmers like Sah and Belampake have planted various cash crops like brinjals, okra, tomatoes, and bitter gourds. Since Asar, Balampake has earned Rs 40,000 from selling brinjals in Gaushala Bazaar, which is some eight kilometers away from Kusmadi.

To ensure the land is not washed away by the river again, the local government and its partner organizations have built embankments and employed bioengineering methods, such as multi-layer farming and planting bamboo trees along the river bed.

But while such measures do build the resilience of vulnerable communities, they are not enough to shield them from flooding events in the long term.

“Riverbed farming is being practiced in a lot of areas, in Nepal and across the world, and it does work as an additional source of income for impoverished communities and adds to their resilience, but it is not the most sustainable practice,” said Abid Hussain, a food security economist with expertise in climate change adaptation who is currently working with ICIMOD. “Rivers change their course every year and having fields next to rivers will mean the farmers will always be vulnerable to erratic climate.”

But for many of the families in Gaushala Municipality living beside the river, with no education and property, farming on whatever land is available is their only option.

“Some years, droughts make it impossible to grow anything and other years, floods take away everything,” said Belampake. “If we had an option to move somewhere else, we would. But we have nowhere to go.”

This report was supported by the Road to COP26 campaign implemented by the British Council and funded by UKAID.

Dismay and discrepancy at COP26

One young Nepali climate justice activist reflects on her experience attending COP26 and illustrates how the conference ultimately let us all down.