Prosperity and development should not come at the cost of an indigenous community's cultural heritage. 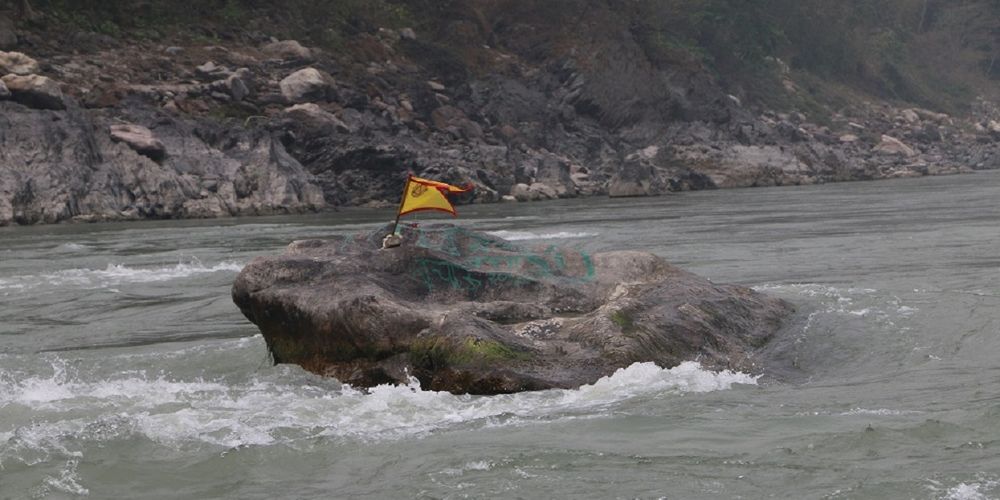 Khuwalung, a large rock in the Saptakoshi River, is a historical landmark for the Kirat community. (Photo courtesy: Makalukhabar.com)

​In his budget speech for the fiscal year 2021-22 in late May, then Finance Minister Bishnu Poudel announced that water transport would be operated from Chatara to Bhojpur on the Koshi River, and that obstacles from the waterway would be removed. Earlier, in February, then Prime Minister KP Sharma Oli had also expressed the intent to break “a huge rock” in the Saptakoshi River to clear the waterway for jet boats and small ships.

For Kiratis, Khuwalung is not just a rock. According to the sacred Kirat oral tradition, centuries ago, several groups migrating from their original settlements approached the Saptakoshi River near today’s Belaka municipality of Udaypur district. As an offering to cross the river, the first group sacrificed a bird, a bulbul. A large rock then appeared in the middle of the river, providing them with a surface with which to cross the water. The second group that reached the banks offered blood from a woman’s finger. Several other groups, all crossing with the help of the rock, settled in Nepal’s eastern hills, according to Bhogiraj Chamling writing in Kantipur daily.

Located beneath the confluence of the Arun and Tamor rivers, Khuwalung symbolizes the rise of Kirati culture in the hills of eastern Nepal. The Kirat revere natural entities like rivers, streams, and hills, according to the poet Dewan Kirati. He describes Khuwalung as one of the greatest Kirati landmarks.

Subash Thebe Limbu, a Kirat artist, also regards Khuwalung as one of the stars in a constellation of Kirati memories.

“Sacred sites like Khuwalung help us to access our history, our origins, situate our place in the present time, and help us to move forward as fellow humans,” he said.

The government proposals to destroy Khuwalung have infuriated the Kirat community. Cultural activists have strongly objected, launching campaigns to protect the sacred rock. Indigenous proponents have condemned the planned destruction of Kirati heritage for water transport. Sanjay Santosh Rai, chairperson of the Nepal Federation of Indigenous Nationalities, told The Rising Nepal that it was wrong to destroy historical objects in the name of development.

“Before taking any rash step, discussion with local authorities and the community is the right way forward,” he said.

After Poudel’s budget speech, the Federation of Indigenous Nationalities Litterateur/Writer of Nepal (FINLON) appealed to all writers, cultural activists, analysts, politicians, intellectuals, youths, and the general public to protest the government’s hegemonic encroachment of a minority culture. Referring to the prime minister’s speech, Rajan Mukarung, president of FINLON and a Madan Puruskar winner, explained that “the stone” Oli had mentioned clearly indicated Khuwalung. On social media, he pointed to this remark as displaying the ‘casteist’ intention of the government.

Following the protests, the Province 1 government announced plans to safeguard Khuwalung. Addressing the provincial assembly on June 3, Chief Minister Sherdhan Rai affirmed the protection of Khuwalung. He asked, “How can a rock so attached to the Kirati civilization and community be broken?”

Khuwalung connects the history of every Kirati sub-group. According to Bhogiraj Chamling, after crossing the Saptakoshi going east, every Kirat group followed a different tributary of the river. The group that followed the Tamor River is today recognized as Limbu while those following the Arun River became the Yamphu, Lohorung, and Mewahang Rai. Others made their way along the Dudh Koshi and became Tilung, Wambule, Dumi, Kulung, Bahing, Bantawa, Sampang, and Khaling Rai while those who followed the Sunkoshi became Sunuwar, Jared, Surel, Hayu, and Thami.

Water transport can bring prosperity for Nepalis, but it does not have to disrupt any community’s cultural sentiments. There can always be a better alternative for prosperity through mutual accord.

“The country has adopted colonial ways of dealing with indigenous nationalities by planning to demolish Khuwalung,” said artist Limbu, explaining that several researchers have put forward alternatives to this proposal.

The prosperity achieved by obliterating an indigenous group’s cultural heritage can create tension between different castes and communities, as has been evident with the government’s efforts to build a fast-track highway through Khokana. There have been numerous such attempts from successive governments. Similar debates had arisen around the reconstruction of Rani Pokhari and Kamalpokhari. Activists had protested the government’s plans to turn centuries-old cultural heritage into blatantly commercial sites.

Any prosperity such plans bring will become ephemeral. Heritage landmarks might contain economic values, but the benefits of preserving a community’s emotional bond and traditional practices should triumph over any commercial value.

The Oli government had prioritized rapid developmental activities, but these actions have been uncareful and have placed numerous stressors on the environment and on cultural heritage. Whether it is Kamalpokhari, Khokana, or Khuwalung, the existence of these intangible heritages is in peril if Nepal continues down the developmental trajectory outlined by the Oli government.

Alternatives must be put forward so that history is not erased in the pursuit of material wealth. Khuwalung, thus, must stand tall, reflecting Nepal’s historical and cultural heritage amidst the high currents of the Saptakoshi. Cultural heritage invariably has greater worth, albeit intangible, than the quick fix of development.

Women’s experiences are informed by not just their class, but also their caste, ethnicity, and gender