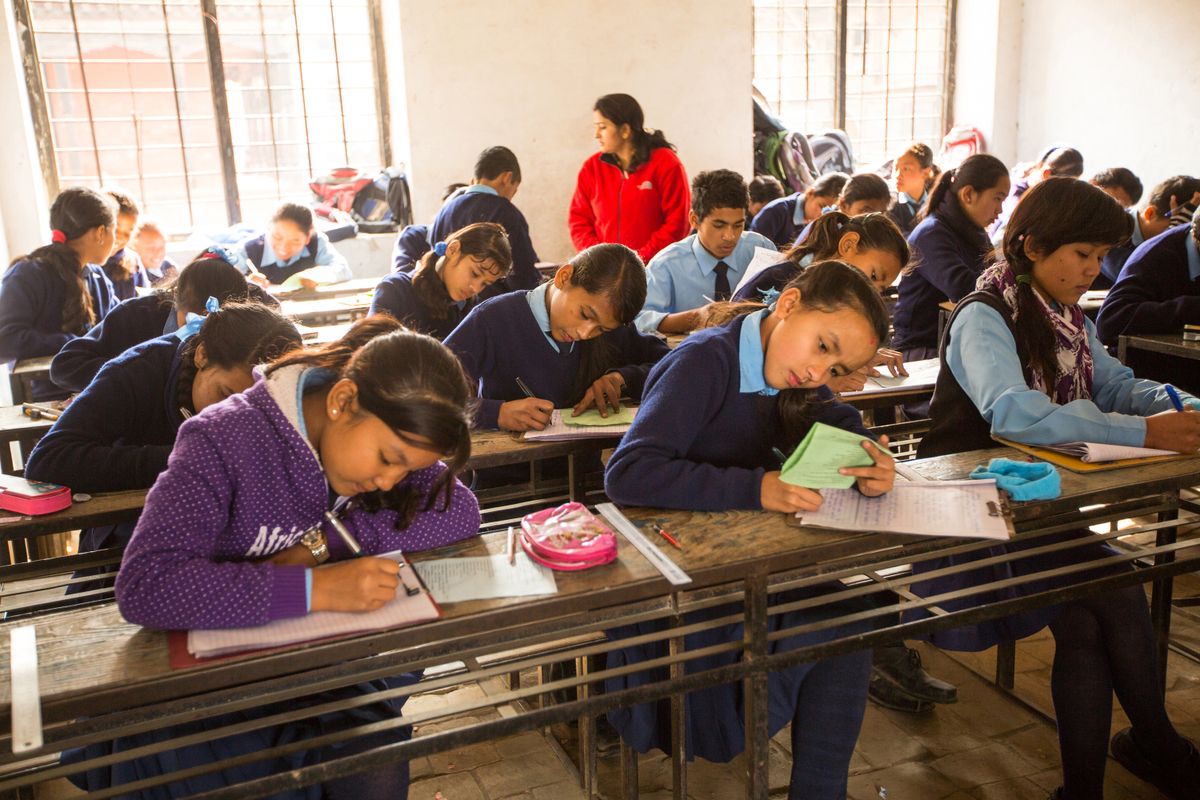 Fifteen-year-old Nisha Khatri came to Kathmandu last year for higher education. She moved to the capital city from her village in Dailekh, in Karnali province, with her parents so that they could find better jobs here, and she, a better education. But things have not gone as planned for Khatri.

Khatri and her parents, before moving to Kathmandu, worked and lived in Punjab, India. While there, Khatri studied in a local school, primarily in Hindi. But her family moved back to Dailekh when the COVID-19 pandemic started and she enrolled in a government school where she had to learn to read and write in Nepali.

“It has been really difficult for me to study because of the language issue, but I learned Nepali easily and quickly because we spoke Nepali at home and it is similar to Hindi in many ways,” said Khatri.

But there’s now another language problem Khatri is currently facing in school.

At the beginning of this academic year, which started in April 2021, the Kathmandu Metropolitan City government had made it mandatory for all schools – 640 private and 91 public – within its jurisdiction to implement a ‘localized’ curriculum. In addition to regular subjects like math, science, and English, one new subject is being taught to students from grades one to eight. But students — and a majority of private schools — are having a difficult time adjusting to this localized curriculum.

The new subject teaches the Kathmandu Valley’s local culture, history, language, festivals, and heritage. Students are taught all of this in Nepal Bhasa, but the writing and reading is done in Nepal Bhasa written in Devanagari script. Many students, especially those who do not come from Newa families and do not speak Nepal Bhasa, are finding this subject especially difficult.

“I am really struggling with this class, because I don’t understand Nepal Bhasa at all,” said Khatri, a grade 8 student at the Koteshwor Saraswoti Higher Secondary School. “The teachers teach us by translating everything into Nepali but studying a subject in a new language in grade 8 makes it very difficult for me to understand anything.”

For young children like Tamang, Nepal Bhasa imposes an additional burden of having to learn another language, in addition to Nepali and English.

To roll out the local curriculum, the education department under KMC has appointed 127 Nepal Bhasa teachers in all 91 community schools and has trained more than 300 new teachers, according to Motiraj Khanal of the city’s education department. The metropolis also distributed free books to public schools.

“We have to learn about local culture through the local language. That’s how we can preserve and promote a language and a culture,” said Khanal. “If one can live in Kathmandu then what’s wrong with learning its local language?”

And while it is true that students should learn about local culture, it does not mean they have to be mandated to study the subject in Nepal Bhasa — a language that is not the mother tongue for many students; in fact, according to the 2011 census, there are 123 languages spoken as mother tongues.

“Kathmandu is not only home to people who speak in Nepal Bhasa. People of different cultures and ethnicities live here and making it mandatory for students to learn a language they do not connect to is not the right way to go about it,” said Kashinath Tamont, a writer, researcher, and linguistic expert. “Of course, studying the local culture is a necessity and that is a good initiative by the local government, but students should be given the option to choose their language. Other prominent languages that are spoken in the city should be put as options.”

Many private schools too are opposed to the mandatory requirement.

“This is all part of mayor Bidya Sundar’s agenda and we have been opposing this decision,” said Gyan Bahadur Shrestha, chairperson of Kathmandu wing of the Private and Boarding Schools’ Organization Nepal (PABSON). “While we understand the importance of studying local culture, we do not believe in imposing such a mandate. A choice should be given to students and guardians.”

The provision of mother tongue education began in Nepal after the reestablishment of democracy in 1990, where the Constitution of Nepal 1990, Article 18, 2, stated: "Each community shall have the right to operate schools up to the primary level in its own mother tongue for imparting education to its children."

After the transition to federalism, more authority was given to the local level to formulate education policies that were in line with the local community’s needs. Article 31 (5) of the 2015 Constitution says that “every Nepali community residing in Nepal shall have the right to get education in its mother tongue and, for that purpose, to open and operate schools and educational institutes, in accordance with law.” It is under this provision that KMC has formulated its Nepal Bhasa policy.

But what is happening in Kathmandu’s schools is a stark contrast to what’s happening in schools outside of Kathmandu, especially in areas where a majority of the population converse in local languages. For instance, in Mahottari’s Gaushala Municipality, many students fail and even drop out of school because they have difficulty reading and writing in Nepali. The majority languages in Gaushala are Maithili and Bhojpuri.

“We hardly ever speak in Nepali but all our schools are Nepali or English medium, and that language barrier makes it difficult for us to really understand what is being taught in school,” said Hansi Sah, a 21-year-old who dropped out of school when she was in class 5 or 6.

In Kathmandu, it is not just the students who are having a hard time. A majority of private schools — almost 90 percent, according to Shrestha — have not been able to implement the curriculum because of many logistical issues. A number of private schools The Record spoke to — such as Praxis International Academy in Chuchepati, Budhanilkantha School in Budhanilkantha, and Emile Academy in Baneshwor — have not yet rolled out the curriculum due to difficulties in implementation.

“The government’s decision to roll out this curriculum was too rash. We didn’t have enough time to make preparations,” said Gyendra Lama, chairperson of Praxis International Academy. “We didn’t have the resources, such as teachers for instance, to start teaching this academic year. But we will have to roll it out this upcoming year since it is mandatory.”

There’s also the additional cost that comes with introducing a new subject.

Nepal Bhasa teachers themselves say they are having a difficult time. Bhawana Shrestha is the only Nepal Bhasa teacher in Mahendra Saraswati School in Teku. Every day, she teaches an average of six classes to more than 200 students.

“It’s not easy, of course, being the only teacher for all the grades from one to eight,” said Shrestha. “It’s also not easy teaching these students when not a single student knows how to actually speak Nepal Bhasa. Having said that, students are very enthusiastic about learning the new language and studying about Kathmandu’s local culture.”

Despite all its issues, with local elections around the corner, there is a chance a new local government could step in. What will then happen to this localized curriculum?

“Kathmandu is a Newa city and even if the local government were to change, the next mayor will most likely be a Newa and will continue with the subject. Whatever may happen, when it comes to the subject, it should be implemented keeping the quality of education in mind, not political agendas,” said Shrestha of PABSON.

In Nepal, the right to quality, inclusive education is still a pipedream for girls with disabilities, especially in remote rural areas.

Many schools across the country have been charging full fees despite providing no extra facilities.