Millions still waiting on a chance to vote

Millions still waiting on a chance to vote 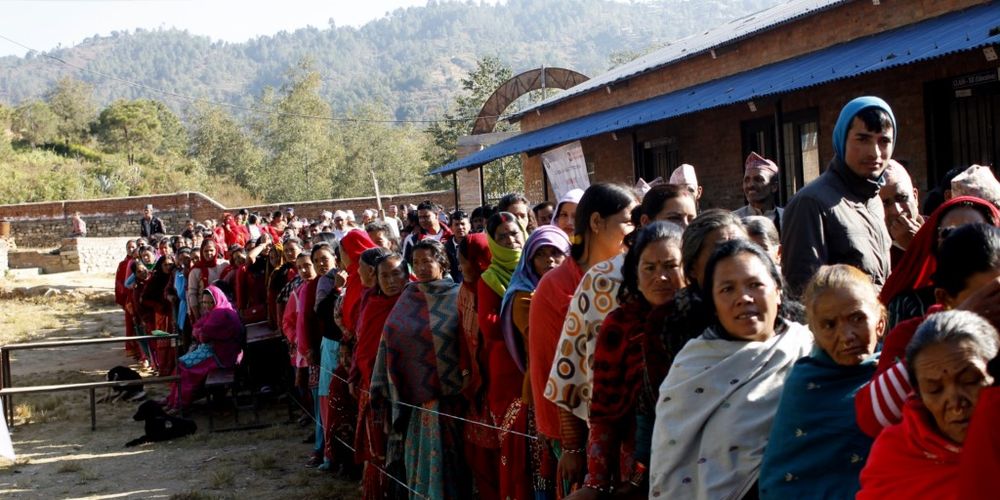 When people around the country line up on May 14 and June 14 to vote in local elections for the first time in two decades, millions will miss the chance to cast a ballot. Estimates by The Record show that up to one-fifth of eligible voters could be disenfranchised.

Local elections have not been held in the country since 1997, and local bodies have been left without elected representatives since 2002, when former Prime Minister Sher Bahadur Deuba refused to extend the tenure of local officials.

In March, the Election Commission released its list of registered voters, containing 14 million names. However, population projections by the Central Bureau of Statistics indicate that the total voting-age population is close to 18 million. Over 4 million voters appear to be missing from the registration roll.

This is not the first time that voter registration numbers have been lower than the size of the voting-age population—the 2013 election saw similar numbers. According to Election Commission spokesperson Surya Prasad Sharma, the Commission has taken steps to improve outreach. Registration campaigns have been held at District Administration Offices, and “mobile” campaigns have been conducted to target missing voters, he said. As a result, 2 million new voters have been registered since 2013. “Some people have definitely missed out, but we don’t think such a large number of voters are disenfranchised, ” said Sharma.

One reason for the discrepancy in voting-age and voter-registration numbers, says Sharma, is that “some people, basically youngsters, are uninterested in getting registered in the voter roll and involved in the voting process.” Another reason may be that some people are old enough to vote, but are not actually eligible.

Still, the figures likely reflect a systemic problem. For many, the issue comes down to access. A 2012 Carter Center statement on the Election Commission’s registration efforts cited several groups that face impediments to registration: “people without citizenship certificates, internal migrants, overseas migrant workers, the elderly, the disabled, persons living in remote areas, landless persons and members of marginalized socio-economic groups.” It is no coincidence that these groups are some of society’s most vulnerable.

Nepal’s new constitution takes pains to enumerate its vulnerable communities and the rights they are guaranteed. It has been lauded by lawmakers as one of the most inclusive in the world. The upcoming local elections are a test of the government’s ability to implement the ideals of the constitution and address systemic issues, such as access to state services.

Registered but unable to vote

Even for many registered voters, access is a problem. Regulations requiring citizens to cast ballots in their official place of residence present a challenge to voters who have moved away from home.

Perhaps the largest group affected by this rule is migrant workers. At the time of the 2011 census, nearly 2 million Nepalis were living abroad, the majority of whom were migrant laborers of voting age. An unknown number of internal migrants across the country are also affected.

“Since election law states that the voters need to reach their respective villages to cast votes, many government officials, internal migrant workers, and voters living away from their villages will be deprived of their voting rights,” said Sharma. “They will be able to exercise their voting rights only when we have options like pre-voting, diaspora voting, or another arrangement.”

“It is sad,” Sharma added, “that despite knowing many people are living abroad and have internally migrated within the country we cannot do anything for them to cast their votes for their favorite candidate.”

The Election Commission conducted a feasibility study in 2008 on how to accommodate migrant workers, and several donors, including UN agencies, have shown interest in providing financial assistance to do so. In 2012, the Election Commission sent high-level teams headed by election commissioners to the UAE, Bahrain, Kuwait, Saudi Arabia, and Qatar to study how to register migrant workers. Major parties have even formed sister organizations in almost every country where the Nepalis are employed. But despite increased access to voter registration, there has been no progress in ensuring access to actual voting.

In April, the Supreme Court ordered a clarification from the Election Commission on why the voting rights of Nepalis working abroad had not yet been secured. “Nepal does not have adequate resources and we face administrative hassles,” said former Chief Election Commissioner Neel Kantha Uprety.

Other South Asian countries have taken steps to ensure that their migrant worker and diaspora populations can exercise their voting rights. Bhutan made voting accessible to citizens outside the country in 2008, while Afghanistan has allowed overseas voting since 2004. The Maldives has also ensured voting rights for voters living abroad. Meanwhile, Bangladesh, Pakistan, and India have all ensured citizens the right to register while abroad, though they must still be in the country to cast their votes.

Demographers, however, say conducting elections without incorporating all voters into the voter roll is troubling. “Obviously, it’s bad for democracy,” said Dr. Padma Prasad Khatiwada, a lecturer of Population Studies at Tribhuvan University. “The EC neither accommodated migrant workers scattered across the globe nor conducted a voter registration campaign in Nepal effectively.”

Adibasi Janajatis' local election representation close to share of population, but with variations within

Polls in the time of a pandemic

Vaccinating Nepalis will cost billions of rupees, but the Oli government would rather divert government funds towards election preparations