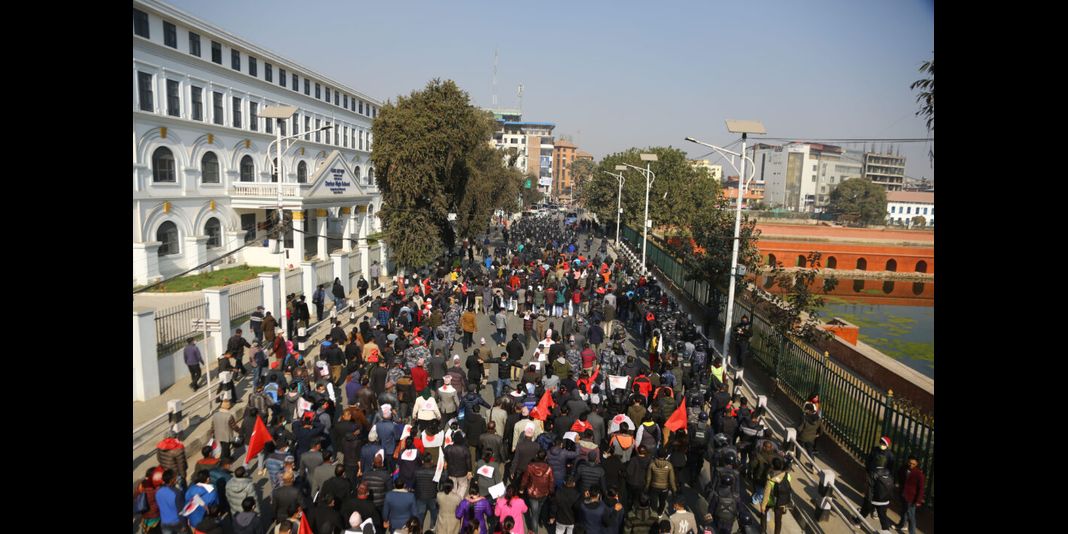 Less than a week after Prime Minister KP Sharma Oli dissolved the Lower House of Parliament, the Nepal Communist Party (NCP) split vertically, with the cracks subsequently spreading from the centre to the local levels. The NCP is perhaps the best organised party in Nepal, and earlier, everyone--from those in the party committees to the cadres at the village level across the country--worked in lockstep with the centre. Now, the party split is splintering the party from top to bottom.

In Kathmandu, the top NCP leaders have been divided into two camps--one led by Prime Minister Oli and the other by former prime ministers Madhav Kumar Nepal and Pushpa Kamal Dahal ‘Prachanda’.

Oli’s dissolution of the House of Representatives has been challenged at the Supreme Court--by the Nepal-Prachanda faction as well as by the other political parties--because the move contravenes constitutional provisions. The President has cited Articles 76 (1 and 7) and 85 of the Constitution as the basis for dissolving the Parliament. But no article in the Constitution allows a prime minister who commands a majority to dissolve the Parliament.

To push the nation towards fresh elections, Oli has mobilised his lieutenants to all seven provinces, where they are organising gatherings of his supporters in the villages to rally support for the PM. On the face of it, it looks like Oli is doing all this to prove that his administration is fully devoted to holding elections. But some observers think he might have other machinations afoot, for he was reluctant to quit his posts despite losing the majority in his party and in government even before he called for the dissolution of Parliament two years before the end of its five-year term.

To bring down PM Oli, his one-time comrades Prachanda and Nepal have been relentlessly campaigning across the country. On Friday morning, both leaders, along with their supporters, reached Maitighar Mandala and staged a sit-in protest. For many in the general public, these protests were reminiscent of similar protests against former king Gyanendra Shah, who in 2005 had seized power by dissolving the Parliament.

At the protest venue, leaders, mainly those representing the Parliament, displayed the slogan Hami Yahi Chhaun (we are still here) emblazoned on their chests. The slogan, according to the protesting leaders, was a challenge to the authorities in the Election Commission and the apex court to come to the streets, do a headcount, and verify that the protestors were in the majority--both in the Parliament and in the NCP. In other words, it was a warning to the election body to not endorse Oli’s move and to not recognise Oli’s faction as the official ruling party.

Egging on the protest, sitting cross-legged on the street, and chanting slogans against the Oli administration were Prachanda and Nepal. The two, who have already filed a vote of no-confidence motion in Parliament, want to revive the Parliament via a court ruling and name Prachanda as the new prime minister.

But while such protests rage on, PM Oli has been steadily working to foil the moves made by the rival faction. He has appointed nine of his supporters to ministerial berths that became vacant after ministers close to Prachanda and Nepal resigned from their positions in a show of disapproval of the prime minister’s move to dissolve the Parliament.

On Friday, just a few hundred metres from the protest venue, the apex court was preparing to begin the hearing on the Parliament’s dissolution. Earlier, more than a dozen advocates and lawmakers had filed writ petitions at the apex court demanding that the dissolved parliament be revived. And even as all eyes were on Chief Justice Choldendra Shumsher JBR, he formed a five-member constitutional bench to deliberate over whether the court should endorse the prime minister’s move pushing for fresh elections. 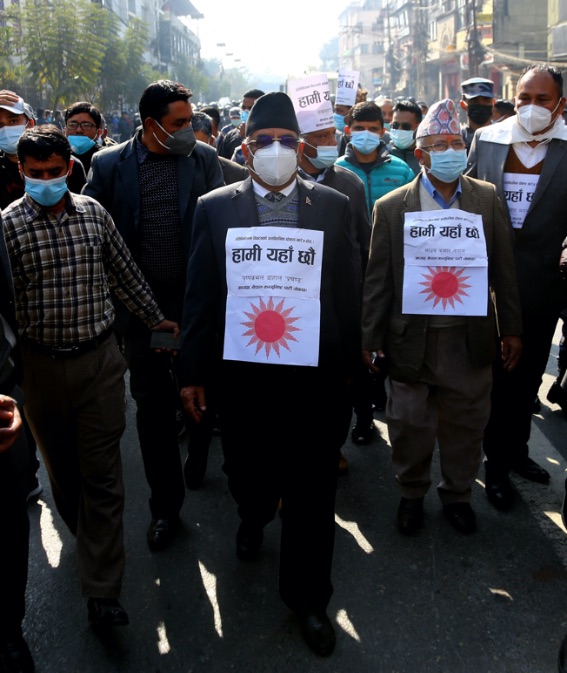 Before the court begins the hearing, both NCP factions want to prove they represent the official party, even as they eagerly await a response on the matter from the Election Commission. The disgruntled faction has been warning the apex court not to go against their request to revive the Parliament.

“We want to tell the justices of the Supreme Court that the Parliament cannot be dissolved,” said Yogesh Bhattarai, addressing the protest rally. “The Election Commission is a constitutional body, and we want you to understand that the sun is our election symbol, that the red flag with the hammer and sickle is our flag, and that the NCP is our party. The NCP isn’t the party of those living in Baluwatar.”

Given this context, legal experts worry that the CJ will influence the hearing through the justices he has picked, who will likely toe his line.

Meanwhile, at Maitighar, after chanting slogans against the Oli administration, the leaders proceeded to march towards Bahadur Bhawan, the election body’s office, where both factions have presented claims that they should be recognised as the official NCP. Since election chief Dinesh Kumar Thapaliya was appointed by PM Oli, in April last year, the Prachanda-Nepal faction fear Thapaliya will side with Oli.

The impact of the deepening crisis hasn't been limited to Kathmandu. Its shocks have already reached the village level. Observers say the turmoil seen in Kathmandu will soon affect provincial governments and will cause serious disputes in local governments as well.

The ruling NCP, which leads six provincial governments among the total of seven, is facing a crisis at the grassroots. On Friday, lawmakers close to Prachanda and Nepal filed a vote of no-confidence against Bagmati Province chief minister Dormani Poudel.

A group of lawmakers in Bagmati Province have proposed Asta Laxmi Shakya as the new chief minister, and have demanded the ouster of Poudel, who is close to PM Oli. Apart from Poudel, Oli’s other trusted lieutenants also now find themselves on shaky ground. Among them are Shankar Pokharel, who leads Lumbini Province; Prithivi Subba Gurung, who leads Gandaki Province; and Sherdhan Rai, who is the chief minister of Province 1.

But the party split is also affecting officials propped up by the Prachanda-Nepal faction. Karnali Province’s chief minister Mahendra Bahadur Shahi and Sudurpaschim Province’s Trilochan Bhatta are close to Prachanda and Nepal. They too could lose their seats, as the party division has begun to rattle NCP leaders across the country.

What happened, what does it mean, why does itmatter

Cornered: Why Nepal’s women have lost in the local elections