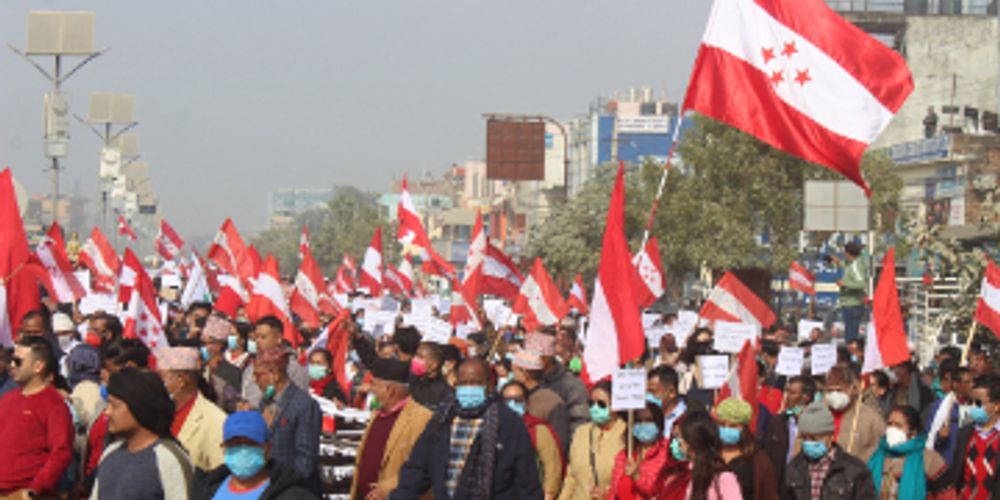 The Nepal Communist Party is coming under attack from several quarters at once. Last week, pro-monarchy supporters organised countrywide rallies demanding the restoration of the Hindu monarchy and the scrapping of the secular republican constitution. Earlier this week, angry farmers from the southern plains arrived in the capital, demanding that the longstanding payments owed to them by sugar mills be settled. And on Monday, the main opposition, Nepali Congress, organised nationwide anti-government protests.

In the latest protests, the grand old party, which has 63 parliament seats out of a total of 275, called out the government for its inefficiency, failures, and corruption. Monday’s protest was prompted by the mishandling of its leader Ram Chandra Poudel by the ruling party’s local members. Poudel, who wanted to inaugurate a bridge in his home district, Tanahu, had earlier been confronted by  workers of the ruling party. Now, opposition leaders have warned that they will continue their protests unless the government corrects its authoritarian working style and until ruling party leaders involved in corruption are booked for wrongdoing.

Besides being taken to task by monarchists, the Congress, and farmers, the government is also being called out by public health experts for their handling of the Covid-19 pandemic. One of their main complaints has to do with the scaling down of PCR testing. On average, only 5,000 to 6,000 tests are conducted daily. And this even though the coronavirus infection rate continues to hover at around 15 percent. According to doctors, it doesn’t help that fewer people are interested in going to the hospital for Covid-19 testing.

“People are willing to get tested only to comply with formalities, such as before flying on a plane and returning to office or going abroad. Most of the public are reluctant to get tested until their condition becomes critical,” said Dr Rabindra Pandey, a public health expert. “But the number of coronavirus patients in intensive care is still high,” he said.

The government has stopped testing high-risk populations for months now, while contact tracing has been stopped entirely.

Last week, the government did attempt to course correct, albeit halfheartedly, by rolling out antigen testing. But these tests had few takers, and they were stopped in just a couple days--even though at least 10 percent of the total, tested randomly, tested positive for coronavirus.

Despite the government’s inability to fully contain the virus, schools, colleges, industries, restaurants and other institutions have been allowed to operate in full swing. And except for crowded areas in major cities such as Kathmandu and Pokhara, most schools and colleges reopened after the Dashain and Tihar festivals.

As most children infected with the virus are asymptomatic, doctors warn that they are highly likely to spread the virus among vulnerable family members, especially if schools are reopened across the country.

“We need to be cautious in reopening schools, as more children who are infected with the virus do not have symptoms,” Dr Basudev Pandey, director at the Sukraraj Tropical and Infectious Disease Hospital, told The Record last week.

Public health experts say this is no time for the country to let down its guard. Developed countries with much better health infrastructure, such as New Zealand, South Korea, and the UK, faced a deadly second wave despite having successfully contained the health crisis earlier.

“Both the general public and the government aren’t fulfilling their responsibilities. And now, we have various groups protesting across the country without wearing masks and maintaining distance,” said public health expert Dr Pandey. “Given the way we are going about things, a second wave of coronavirus is inevitable. And we are not prepared for that.”