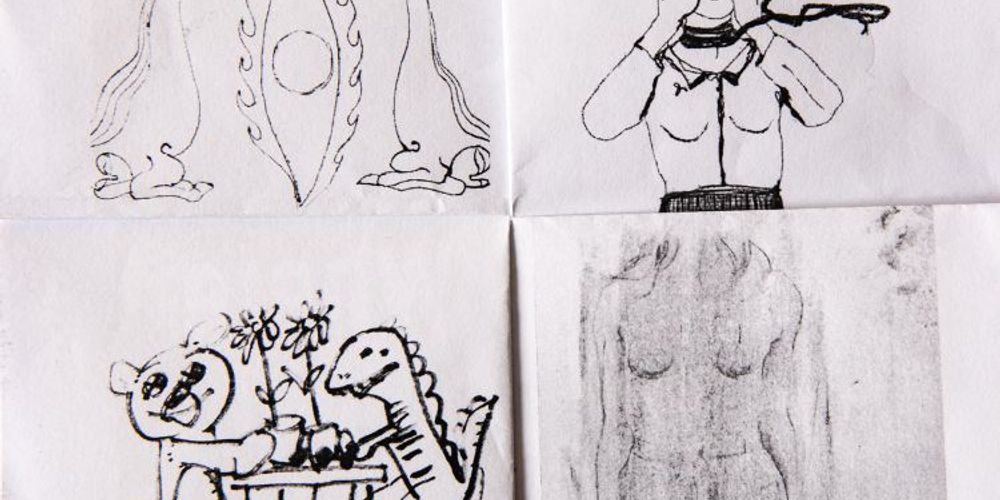 An exhibition titled AxV opened yesterday in an abandoned building in an  alleyway of Patan. The letters A and V stands for Antonym and Vicalana respectively. Vicalana, according to the team behind the exhibition, is Bichalan, a Nepali word that means not following the norms. This is the second in the AxV exhibition series hosted by Kaalo 101.

AxV started with the idea of building non-hierarchical spaces for wom*n and queer artists. According to Helena Knox, the curator of the show, the star in wom*n represents diversity, fluidity, and infinite genders. There are no cis male artists in this exhibition. “This is upsetting a few people I guess, but we wanted the space just for us,” Helena tells me.

She has been running Kaalo 101, an alternative art space, since May 2017. In a very short span of time, Kaalo has become an edgy cornerstone of the Nepali art landscape.

The four artists showcased in AxV are Shradha Devkota and Ashma Hisila from Nepal, Sana Nasir from Pakistan, and Yoshinori Asai from Japan. The artists use photography, video, illustrations, conceptual art, and soundscapes to express and explore themselves in the space. “We want our artists be queer not just in a gendered sense, but queer in the sense of their work, processes and ideologies. All the artists are questioning traditional ideas.”

In the work, I am talking about my aunt who is labeled as this different bahurpi, someone with multiple faces, someone different, someone not “normal,” because she wears clothes that are not properly sewn or not upto the "standard", so I am trying to question that.

I never felt  the need to talk about what is going in my family. Never wanted to and maybe I didn’t know you could talk about it. I always had this question in my mind about this aunt in my family who was always the person who was mentioned but never fully talked about because she was “different.” But I didn't know I could do a work surrounding her, so this work is also about me trying to come out of my comfort zone and show something that I would normally hesitate to show to people.

For me that is the process, being someone, wearing her clothes, trying to imitate someone’s personality, trying to show people about a big issue like mental health, by doing very little, just wearing [her] clothes. I thought it would make it personal. I wanted to put myself in her shoes and see what happens.

The room where I am exhibiting was dilapidated. In the process, I feel like I gave a life to it. I have a studio at home that is quite similar, so I did here whatever I couldn’t or wouldn’t do at home. I imagined what would happen if I were alone at home. To be free. What happens when no one is around?

I am also interested to see if people will step on the papers/ sketches on the floor or if they will hesitate, since we don't usually touch paper with our feet. It is not easy for us to do so, but here people are free. They can remove [the paper], read it, or just walk over it, it’s their choice.

I illustrate. I am interested in figurative style. I like silent emotions. We accept nudity  in private, but not in public. But we shouldn't be ashamed of it, we all have [bodies], we don't have to hide. I do female nudes because I love the female body.

I had a lot of stories in my head but one that kept jumping out of me was the women’s movement in Pakistan  and how it is seen culturally and religiously. It is happening at a time when such awareness is popping up different parts of the world, and we have this collective conversation happening. My work is a reaction to that as an illustrator. I bring in my history, the things that I have been influenced by. This is probably the first time in my life I haven't felt alone, most supported by other women and non binary people.

Women in Pakistan are still fighting for very simple things like the right to take up public space. Going out to have tea in a public space that is dominated by men is seen as a political move.

My work here is a metaphor for finding a power that already exists within that we shut out for whatever reason, to protect ourselves, to stay safe, to not provoke the patriarchy. The narrative I want to follow is releasing that power and seeing what you can do with it.

Sufism is part of my work maybe because I had a lot of conversations with my father who loves Sufi poetry. How beautiful to lose your physical self and gain another level of being, with a whole other space that your soul takes up than your physical body.

The piece is inspired by my experience of living here. I have only lived in the United States and Japan before. Living here and the interactions I have here remind me of how when I was very young, I was not aware that I was gay. A part of me did not want to acknowledge it, in order to fit in with society. Living here and the concept of the show pushed me to face my fears.

My piece is influenced by the time when I was young in Japan. We lived on the second floor of the apartment building and an old lady lived on the first floor. From time to time her granddaughter used to visit her. She had an amazing play dollhouse that had kitchen. I always wanted to play with her, and sometimes I could. At the same time, I was aware of how other people would look at me, I was never fully there, so this piece is to tell myself it’s okay, you can play with dolls. I am finally allowing myself to be okay.

Ideas of masculinity and femininity are very distinct in the Japanese society. In elementary school, for example, boys carry black bag and girls carry red. If you do something against the norm, it is not acceptable. I am trying to question such norms.

The conversations I had with people in Kaalo was inspiring. I had never thought about making piece about my sexuality, because I thought I would limit my audience. But talking about sexuality and upbringing is kind of universal, even if every human being has a different history. We share fears and struggles. Sharing makes them a  universal and human experience.

Some call NFTs a new era of ownership on the internet while others say it’s a fad and a threat to the environment. But what exactly are NFTs?