Rajbhandari’s artworks reflect not only her evolution and range as an artist but also her ability to combine emotions with core art forms. 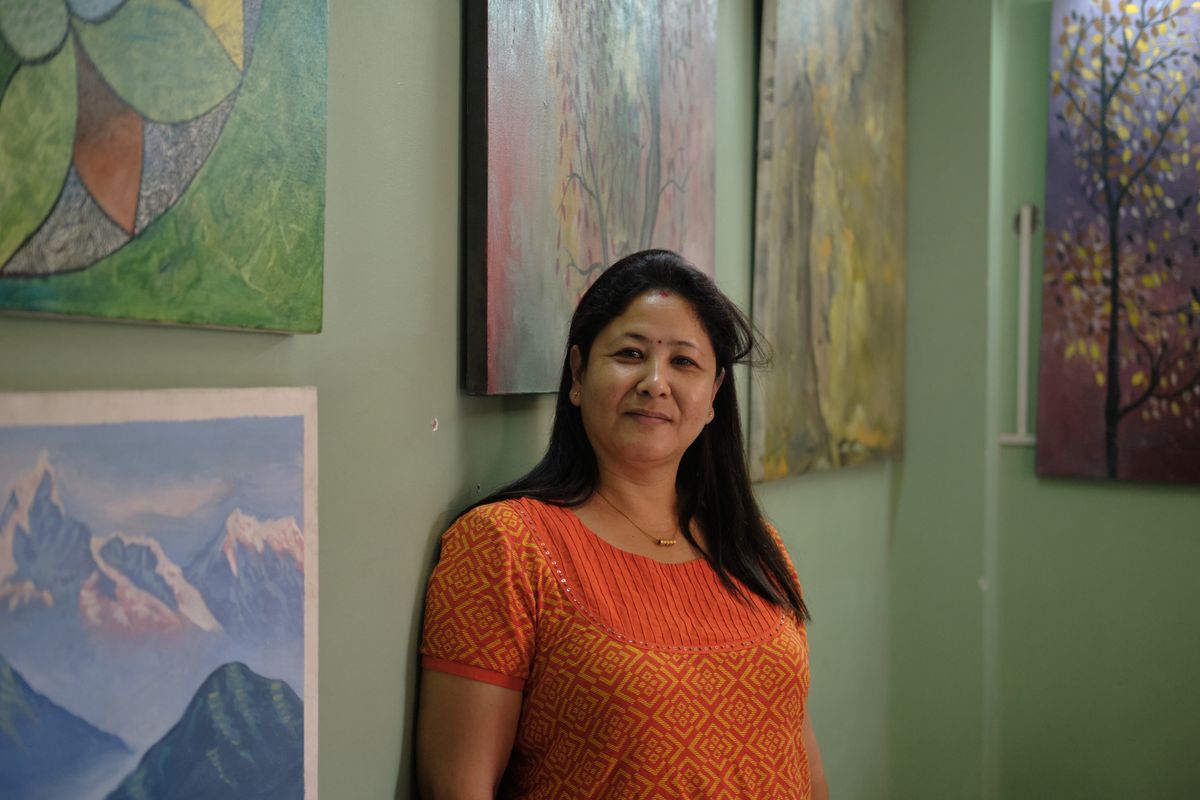 The first thing I noticed about Samjhana Rajbhandari was her name. It is not everyday that you meet someone who shares the exact same name as your mother. This coincidence turned out to be quite the blessing because I then took an interest to go through her work as a visual artist, and what I saw, I found very captivating.

Rajbhandari, 45, has an impressive compilation of work. She’s had nine solo exhibitions and has been a part of a handful more group shows. But what caught my eye was not the volume of her work, nor was it just a single piece or series that struck me. What I really liked was the rich variation and evolution that her years of practice was able to showcase. Rajbhandari’s most recent exhibition, ‘Prints: A tribute to the past’, is only the most recent addition to her gradual evolution and artistic discovery.

Rajbhandari dubs herself as a Kathmandu-based visual artist, working primarily with two particular art styles: the tried-and-tested paint and canvas, and the age-old practice of printmaking. As a matter of fact, Rajbhandari even specialized in printmaking during her graduate study at Lalit Kala Campus.

Aside from her 24/7 job as an artist, Rajbhandari is also an art educator. She is a lecturer at Srijana College of Fine Arts, where she works with undergraduate fine arts students in her specialty area of printmaking. Additionally, Rajbhandari also works with younger kids as a teacher at Nisarga Batika School and at the American Mission Association.

However, for someone who has worked and taught in the field of art for over two decades, Rajbhandari confides that she herself was not too sure when she first decided to enroll as an art student.

Unlike most creatives that begin practice from an infantile age, Rajbhandari admits that this was not the case for her. “I was a science student during my ISC years. Growing up, I had never really given drawing and painting much thought. But I really took an interest in drawing when I started to make diagrams for my biology assignments. I’d even end up making sketches for my friends,” she shared.

This knack for drawing lit a spark in her that she had not been aware of before, eventually leading to her taking a leap of faith and diving headfirst into the world of fine arts.

As Rajbhandari started her undergraduate studies in fine arts, she also started to explore and socialize more with other contemporaries and veteran artists of the time. Having had a late introduction to the world of art, Rajbhandari understood that she had a lot of catching up to do with her peers.

“Back then Srijana had not yet become a college; it was still just a gallery. It did however run hobby classes, which I readily signed up for,” she shared, continuing, “Here I was lucky enough to make acquaintance with many talented artists that had been working actively in the Nepali art scene of the time. Uttam Kharel, Surendra Raj Bhattarai, and Krishna Manadhar were great mentors to me during my early days as an art student.”

As a student, Rajbhandari, along with her peers, was also running art classes for younger kids at Sirjana. From the money that she and her peers would make teaching kids, they would pay for their own tutelage.

Rajbhandari finished her undergraduate degree in fine arts in 2002. According to her, while she was yet to find her groove as an artist, her academic endeavors greatly assisted in honing her technical capacities as an artist.

Armed with her growing skill set and a learner’s mentality, Rajbhandari set out to figure what kind of artist she really wanted to be. The first step was to start working on a group show — a humble exhibition titled “an exhibition of paintings.” Here, Rajbhandari, who had largely worked on cityscapes and landscapes as a student, put out a semi-abstract series of work that dived into the Kathmandu cityscape

Since then, Rajbhandari consistently practiced her craft, developing not just her technical skills, but also greatly evolving her perception as an artist.

Rajbhandari’s first proper muse came in the form of trees and tree branches. “I enjoyed working with trees as a subject. To me, the winding bark and branches of trees resembled the winding and intertwined lives that humans live. Connecting human life with nature felt fitting to me,” she expressed.

Even her tree series showcased a strong range of artistic variation and growth: not only did she utilize trees as a mascot of the intricacies of human life, she would also make use of different palettes to define the undulating range of emotions that a person lives through. What had started out as an experiment with a few painted branches on canvas grew to become one of Rajbhandari’s most definitive series of abstract work.

Over the years, Rajbhandari experimented with her art. She tested stones and cityscapes and traditional Ashtamangals as inspiration for her work. Then gradually, she progressed from abstraction to working with patterns and symmetry, which brings us to Rajbhandari’s fascination with the art of printmaking, and consequently her most recent, and first, print exhibition.

Rajbhandari shared that she had always been drawn towards traditional patterns and iconography such as Ashtamangals  for a really long time, but had always refrained from testing out patterns in her own work. Once she did bite the bullet, she was captivated by the simple yet intricate process that such a style demands.

Rajbhandari took her obsession with non-abstraction a step further when she enrolled into the very first Master’s of Fine Arts cohort in Lalit Kala Campus, choosing to specialize in the art of printmaking.

Unfortunately, while Rajbhandari did graduate with a printmaking degree, she was not able to readily practice doing what she loved. “Printmaking usually demands a lot of heavy and expensive machinery and tools. This was something that I could not afford,” she shared.

Luckily for Rajbhandari, she was able to get closer to her passion for printmaking once she joined Srijana College of Fine Arts as a printmaking faculty. And she found inspiration for her latest work in an unlikely place: her late father’s stamp collection, which she stumbled upon while helping her mother move. While he was not an artist, Rajbhandari’s father had been a lifelong philatelist, and had often shared the passion for the hobby with his daughter as she grew up.

“I remember bundling up envelopes and watching my father wash and store stamps from the letters that he would be sent. It had not struck me as an artform then, but when I rediscovered his old collection during the lockdown, it really resonated with me. I remembered how my father had expressed that he too wanted to have an exhibition of his stamps, just like that of my paintings,” Rajbhandari shared.

The realization that stamps too are, in their own right, works of art was a eureka moment for Rajbhandari. It was then that she settled on the idea of creating a series of works by combining her father’s impressive collection with her expertise in woodcut printmaking.

And thus, Rajbhandari’s most recent series came to be — a collection of prints based on historic as well as self-imagined stamps made out of painstakingly carved woodblock matrices and printed on traditional Nepali lokta paper. Rajbhandari ran a very limited run of prints, only three to four prints for every matrix made. She also mentioned that while she has sold a considerable number of prints, she is yet to put any of her matrices up for purchase.

Looking back to see the future

Rajbhandari without a doubt has evolved to be a unique artist in the greater Nepali art scene. When asked about how he felt about Rajbhandari’s transition from the abstract to a form that is more calculated, veteran artist Madan Chitrakar explained that just because forms such as printmaking are more conscious does not mean that they are not as expressive as the abstract.

Chitrakar shared, “She [Rajbhandari] has a mission. It is to document her profound love for her father and to find the best way in which she can express her love. She has done this by bringing together his stamps and her prints.”

Chitrakar goes on to note how even something as small as a stamp can mean so many different things to so many different people. To philatelists, it is a documentation of Nepali history, to Rajbhandari it is a poetic expression of familial love.

Rajbhandari’s career as an artist has continually shown how she has been able to clash thought and styles, not necessarily in a contemporary way, but rather in a way that deconstructs art forms to its very roots.

Chitrakar remarks, “She has shown that as postmodernist or contemporary as the world of art gets, an artist cannot escape, but rather must embrace their roots.”

As for Rajbhandari herself, she shares that she has already begun work on a new series of woodcut prints, hinting that she still has a lot more she wishes to document and express.

What once was lost

A collective effort by activists, historians, journalists, and curators has resulted in the return of stolen Nepali artifacts from foreign lands, but constant vigilance is still necessary.

50 Days of Tarai is more than a travel book — it is an intricately designed showcase of the author’s personal experiences and her artistic abilities.