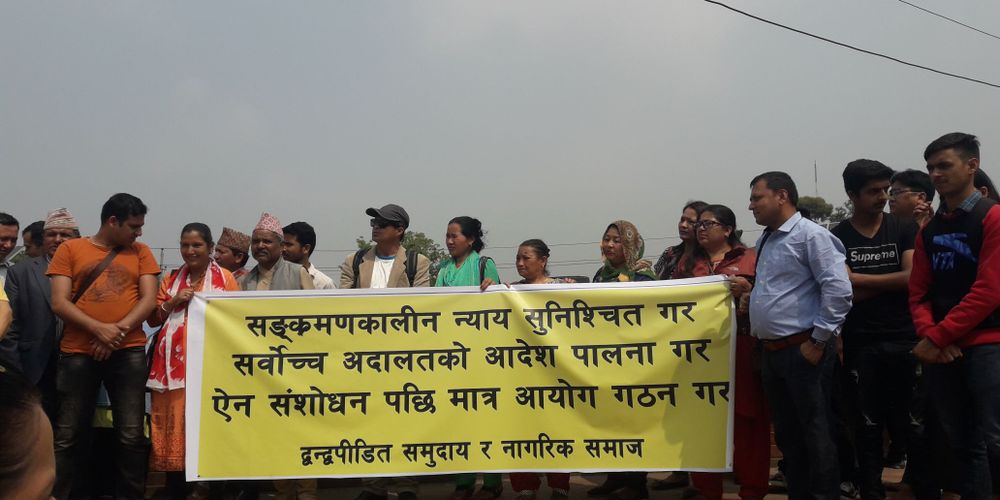 Nepal Communist Party (NCP) co-chair, Pushpa Kamal Dahal ‘Prachanda’, said on September 8 that the anti-constitution protest that led to the death of seven policemen and a child in Kailali in 2015 and triggered widespread violence and arson against the Tharu community was a “political revolt”.

Dahal made the statement after receiving a memorandum from a delegation of Tharuhat/ Tharuwan Joint Struggle Committee (TJSC) at his residence.

The memorandum demands, among other things, the unconditional release of Rastriya Janata Party Nepal (RJPN) MP Resham Lal Chaudhary and 10 others currently serving life terms for their alleged involvement in the incident.

Dahal's remarks make him the first NCP leader to acknowledge the political nature of the incident that has long divided public opinion. His remarks come at a time when the RJPN and the Samajwadi Party, a partner in the ruling coalition, are mounting pressure on the government to release those in prison.

For the first time in the history of the Nepal Army, a sitting Chief of Army Staff, Purna Chandra Thapa, has disclosed details of property he owns, and ordered all NA personnel to do the same.

Thapa also announced a special mechanism to probe misuse of army resources and influence, and vowed to end corruption during a program organized at NA headquarters to mark his first year in office on September 10.

Thapa's commitment to reform what is sometimes described as one of Nepal’s most opaque and corrupt institutions earned him praise in the mainstream media and on social media, but sceptics point out that the Nepal Army remains unusually independent, since neither the Commission for the Investigation of Abuse of Authority nor the National Vigilance Centre have any jurisdiction over it.

Thapa also said that the NA would provide unconditional support to truth and reconciliation processes, in order to wrap up the peace process.

The strategy, which this year was given formal shape in a US Department of Defense document, seeks to strengthen US cooperation with the region stretching from India to the west coast of the United States, as a strategic counterbalance to China’s increasing geopolitical power and ambitions.

Dahal's aides say he was misquoted, and that he had only told Yi that Nepal disapproved of any initiative  targeted at China.

Dahal has once again found himself in the midst of a diplomatic spat. In January, he controversially denounced what he described as the US’s “imperialist occupation” of Venezuela.

Following The Kathmandu Post’s report, the US Embassy in Kathmandu asked the Ministry of Foreign Affairs to verify the statement and demanded to know Nepal's official stance on the Indo Pacific strategy. Nepal has long been ambiguous on the issue, in an attempt to both not irk China nor endanger USD 500 million worth of aid pledged by the United States under the Millennium Challenge Corporation.

Back to work in Malaysia

Nepal and Malaysia have agreed to resume the labour recruitment process that has been on hold since 2018. The process will now follow the criteria set out in the agreement the two governments signed last year, a joint task force concluded at the end of a two-day meeting in Kuala Lumpur on September 12.

Nepal stopped issuing departure permits to citizens going to work in Malaysia in May 2018, objecting to the high fees charged by the embassy of Malaysia and its subcontractors for visa processing.

The Malaysian government has now agreed to allow 86 additional Nepali health centres to conduct the pre-departure health check Malaysia-bound workers must undergo; previously only one centre was authorised. Nepal, for its part, has withdrawn its demand that the Malaysian embassy in Kathmandu stop using any subcontractors in the visa process.

In November 2013, Malaysia outsourced visa processing to VLN Nepal, a subcontractor, and hiked the visa fee to Rs 3,900 from Rs 700. The embassy later subcontracted elements of the visa process to three more companies, to collect biometrics, stamp holograms, and carry out the background checks on applicants. All this raised the fee Nepali workers had to pay to almost Rs 18,000. The free-visa-free-ticket policy adopted by the Nepal government in 2015 was meant to shift the burden of these fees from workers to employers.

Nepali Congress leader Ram Chandra Paudel has accused the government of Prime Minister KP Sharma Oli of doing nothing to combat dengue outbreak. The government's failure to even “kill mosquitoes” had laid bare its incompetence, Poudel said in Pokhara on September 10.

Exact figures are hard to come by, but some reports suggest that more than 100,000 people could have contracted dengue, making this a major public health crisis. Hospitals in the capital including Sukraraj Tropical and Infectious Disease Hospital – the country’s only hospital tropical and infectious disease hospital – report a massive increase in the number of patients they have received in recent weeks.

The main opposition NC has intensified attacks on the government ahead of by-elections for 51 vacant seats at the local, province, and federal levels. On September 12, NC MPs demanded the resignation of Health Minister Upendra Yadav, criticising his foreign travel while the country was in the grip of a dengue epidemic. The previous day, NC President Sher Bahadur Deuba had urged the public to vote for his party to defend democracy and civil liberties.

The National Human Rights Commission has said it is concerned about reports of political interference in appointments to the two transitional justice commissions.

The constitutional body has repeatedly tried to distance itself from the appointment process and threatened to recall its member, Prakash Osti, from the five-member committee set up by the government to recommend commissioners, if the body was not allowed to work independently.

The committee, led by former chief justice Om Prakash Mishra, is expected to recommend officials to the Truth and Reconciliation Commission and the Commission of Investigation on Enforced Disappeared Persons this week.

In August, NHRC Chairman Anup Raj Sharma said: “The Commission realizes that if the selection of the Commissioners of both of the Commissions happens as the matters are coming through the media; the appointment process cannot be impartial, neutral, and transparent.”

Naresh Thapa, Home Minister Ram Bahadur Thapa’s brother, has been arrested for his alleged ties to a criminal group. Police claim that Thapa was working with Samirman Basnet, a gangster thought to be operating an extortion racket from Sundhara Jail, where he is serving time for murder. Basnet masterminded the murder of Sarad Kumar Gauchan, former chairman of Nepal Construction Entrepreneurs' Association, who was shot dead in a broad daylight last year in Baneshwor, Kathmandu.

Thapa was arrested last Tuesday after the preliminary police investigation linked him to Basnet's extortion racket. Naresh, who is retired from the Indian Army, has been released on bail.