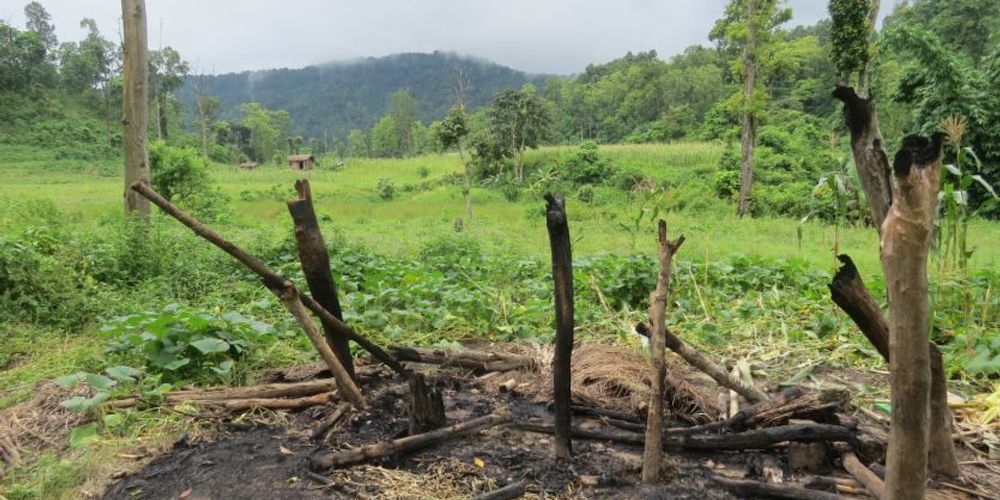 When Dan Bahadur Praja, 20, set off from his home, in Kusum Khola, on the morning of July 18, he still had a dwelling to return to. Just a few hours later, he would be returning to its charred remains. Dan Bahadur was dropping off his niece at her residential school in Laxmibas Village, a four-hour drive away, when he got a call from his neighbours. They told him that his house had been torched by officials from Chitwan National Park and personnel from the Nepal Army.

“I headed home immediately. I couldn’t believe they would burn down our house just like that. I arrived to find that our house had been reduced to ashes. All our belongings were still inside,” Dan Bahadur told The Record.

He found out that his neighbour Kajiman Chepang’s house had also been burned to the ground and that nine mud houses in the vicinity had been demolished with the use of elephants.

“The fire gutted everything in our house. All we had left were the clothes we were wearing. Had they informed us earlier, we could have at least collected our belongings,” said Dan Bahadur. The inferno incinerated, among other things, his citizenship card and cash amounting to NRs 10,000. That money comprised all of his savings from his daily wage work over this year’s paddy-plantation season.

The Kusum Khola incident was not the first instance of abuse inflicted by park officials and army personnel on indigenous communities who live on land bordering Nepal’s protected areas. Many members of the Chepang community live near and depend heavily on the forests for their livelihood. Because of their nomadic past, an estimated 90 percent of Chepangs don’t own land, and support themselves by hunting, fishing, and foraging for wild roots and shoots in and around forests. But Nepal’s national land and forest protection policies have restricted their access to natural resources, criminalising even their forays into the forest, and making their already fragile livelihood situation even more precarious.

The Chepangs have called the area around Chitwan National Park home for a long time. Ward 9 of Madi Municipality, near the national park, for example, houses 340 Chepang families. According to the ward chair, Shree Hari Subedi, there had been plans to resettle 150 households to public land far from the park premises. But park authorities had obstructed the construction of houses in Krishna Nagar and Gaurigau, Bareilly, in Ward 7--where they were to be resettled. “We would have already resettled them if not for the park authorities. The Chepang families have been living in Kusum Khola, on government-owned land, for almost 30 years now. Apart from not owning their own land, they are deprived of education, jobs, and access to essential services,” said Subedi. “Thus destroying their homes in such a manner is a condemnable act on the part of park authorities.”

After their houses were demolished, all 11 Chepang families from Kusum Khola were offered shelter at a community elementary school in the area. According to Kamal Chepang, Secretary of the Chepang Squatter Settlement Management Committee, the families were aware of their impending eviction and had been looking to move out, but due to the lockdown, they had had to postpone their exit from the village.

“They began sowing maize and rice while waiting, as farming was the only source of income they could rely on in the interim. But when the authorities destroyed their houses, these families lost everything,” said Kamal.

In Nepal, Chepangs are categorised as a highly marginalised indigenous community. According to the 2011 census, the Chepang population stands at 68,000, and the community suffers from poverty, low literacy rates, little to no land ownership, and absence of job security, all of which make the community vulnerable to human rights abuse. To make matters worse, atrocities on Chepangs often get overlooked. While Nepal’s civil society and human rights community are quick to issue statements, even regarding partisan issues, they are often the last to respond to atrocities meted out to marginalised communities.

The Kusum Khola incident found them dragging their feet yet again. The destruction of Chepang homes came into prominence and most official statements were issued only after the death of Raj Kumar Chepang, a 24-year-old youth from Milan Chowk, Rapti Municipality, on July 22. On July 16, two days before the Chepang houses were burned down in Kusum Khola, Raj Kumar, along with six other men, was brutally assaulted inside Chitwan National Park by army personnel. He was unable to recover from his injuries and died a week later. His body has since been brought to Kathmandu for forensic analysis.

News of the destruction of Chepang homes was first reported on July 20 in the national media, but there was no response from Nepal’s human rights organizations. On the same day, the Nepal Federation of Indigenous Nationalities (NEFIN)had expressed strong objections to the incident and appealed to the National Human Rights Commission (NHRC) to take up the case.

But it was Amnesty International Nepal who first condemned the Kusum Khola incident, even before Raj Kumar’s death had grabbed the headlines. “Forcing anyone from their homes is an act of cruelty. To do so with the use of arson and charging elephants, risking lives and destroying the few possessions of an already marginalised community, is unconscionable and a human rights violation,” reads a statement issued by Nirajan Thapaliya, Director of Amnesty International Nepal on July 21.

On July 22, only after news of Raj Kumar’s death had made headlines, did the NHRC issue a statement urging the government to protect the Chepang people’s rights to life and property. The Advocacy Forum, the Terai Human Rights Defenders (THRD) Alliance, and the Informal Sector Service Centre (INSEC) also issued a joint-statement demanding an investigation into the case and calling for action against those involved in rights violation. While national rights organisations defended the delay in their condemnation on the pretext that they had to first gather enough information to issue their statements, Nepal’s civil society merely vented its ire through social media, without formally condemning the incident.

Because no one holds them accountable, the state’s personnel have been known to often employ brutal tactics when dealing with Chepangs. Sometimes, these dealings can lead to extremely tragic outcomes, as was the case with Raj Kumar’s death. “On Shrawan Sakranti (the first day of the Nepali month of Shrawan, a festive day) six of my friends and I had gone into the forest to collect niuro (fiddlehead ferns) and wild vegetables,” said Santalal Praja, one of the survivors of the brutal beatings that took place on July 16. “Some army personnel found us collecting ghongi (snails) in a rivulet across the Rapti River. They overpowered us, and beat us up. They kicked and punched us, beat us with batons, and forced us to carry heavy logs for hours.”

All seven of them, including Santalal and Raj Kumar, were taken to an army post and asked to post a fine of NRs 1,000. Since they didn’t have the money to pay the fine, they were released after a few hours on the condition that they post a NRs 500 fine later.

“We were in such bad shape by the time we reached home, we just collapsed. I developed a fever. I started taking medicine for my fever the following day, and am still taking it,” said Santalal. “Although most of us recovered from the beating, Raj Kumar, who was rather frail, was unable to recover from his injuries.”

Santalal added that the entire group that had ventured into the forest on that fateful day was well aware of the restrictions on gathering wild vegetables from protected areas. He maintains, however, that such foraging practices are integral to his community’s livelihood and cultural identity. The national park authorities, on the other hand, argue that they are merely fulfilling their duty of protecting designated conservation areas. Owing to the manner in which state personnel wield that supposed mandate,  indigenous ethnic groups and Dalits have routinely faced injustice at the hands of national park authorities, army personnel, and forestry officials.

The list of reported atrocities committed against the marginalised is a long one. In 2006, 55-year-old Shikharam Chuadhary died in the custody of park officials. Four years later, army personnel shot three Dalit women, including a 12-year-old-girl, in Bardiya National Park. Between 2008 and 2010, the UN High Commissioner for Human Rights documented six murders committed by Nepal Army personnel in national parks and wildlife reserves. But not a single person has yet been convicted or punished for these crimes, which speaks volumes about the state actors’ blatant abuse of authority. And that culture of impunity has emboldened authorities deployed in protected areas to continue violating the rights of indigenous populations.

In one case, an alleged murderer was even rewarded for deploying draconian measures. Assistant warden Kamal Jung Kunwar, accused in the afor Fbutementioned 2006 case, was given the WWF Leaders for a Living Planet award for his “instrumental role” in achieving zero poaching for the second year in a row. WWF continued funding the conservation project even as park authorities refused to take action against their officials. And WWF continued to fund the project even with the surfacing of evidence that strongly pointed towards Kunwar’s culpability in Shikharam Chaudhary’s death.

This disregard for landless marginalised Nepalis is also evident in the actions of Nepal’s top-rung officials. Once news of the demolition of Chepang homes in Kusum Khola began to spread, Minister of Forests and Environment Shakti Bahadur Basnet attempted to invalidate the reports. On a Facebook post he wrote on Monday, Basnet dismissed the media’s claims, saying cowsheds, not houses, had been burned, while a few posts had been demolished. He added, “Owing to the gravity of the matter, the ministry has already formed a probe team and deployed it to the field to prepare a report. The ministry will be able to make a stance only after the probe team submits its report.”

On the same day, a group comprising 14 rights lawyers lodged a writ petition in the Supreme Court seeking an interim order to stop the forceful eviction of landless people from their settlements unless alternative living arrangements were ensured. The petitioners have also sought a mandamus against the Home Ministry to probe the Kusum Khola incident and book those involved.

Forceful evictions contravene the constitution and national laws, not to mention international conventions to which Nepal is a signatory. Nepal’s constitution guarantees the right to housing as a fundamental right, and the Right to Housing Act was enacted in 2018 to implement it. But in the last few months alone, landless people have been evicted from Bardiya, Butwal, Janakpur, and Siraha.

The incident in Kusum Khola is the most recent in a series of worrying moves by the government to evict landless people from government land and protected conservation areas. It also shines a light on the culture of impunity owing to which landless populations like the Chepangs continue to get crushed by the Nepali state.

The queer community demand right representation in the new census

Clumping together gender identity and sexual orientation into one category in the census is misrepresentative say some members of the queer community, but there are others who see it as an opportunity