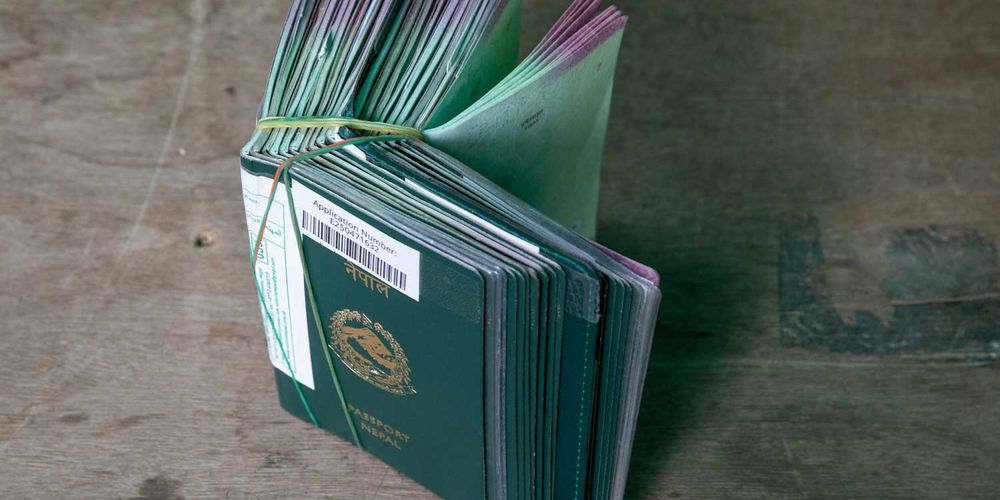 You often hear it in immigration lines at airports around the world: returning citizens who have served their country as diplomats, athletes or other high profile undertakings being thanked for their service. I have heard and seen this even in Nepal – the president, politicians, celebrities and triumphant athletes return to appreciation and open arms. But what makes me think is the question of who do not receive this welcome, those who represent Nepal in the greatest numbers abroad and have arguably contributed the most to Nepal’s development over the past few decades: migrant workers.

These decent and hardworking individuals of all groups who go abroad best represent the range of Nepal’s diverse socio-economic population. At home, they are the backbone of Nepal’s economy and are fundamental threads in its social fabric. Upon their return, though, instead of being welcomed they are most often mistreated and looked down upon in their nation’s capital, seen as ignorant and “low class” people. It’s time this stopped. It’s time to say: Thank you for your contribution!

A legacy of neglect and being “othered”

The history of cross-border migrant workers goes back to individuals who worked in India when it was a British colony. Much of this early migration for employment was to tea estates in India, as well as in Myanmar (then Burma). But no government of Nepal paid attention to these migrant workers, forget recognizing their contribution to the country’s development. Then came the Sugauli Treaty of 1816 between the British Empire and the rulers of Nepal, allowing young Nepali men to join the British forces to protect and expand Britain’s imperial interests. Gurkhas, as these soldiers are still called, even today serve in the UK, India, Singapore and Brunei and various war-torn countries.

Over the last two hundred years, the extent to which Gurkhas, often described as “mercenary soldiers,” have contributed to Nepal’s economy, merits a thorough analysis. But it doesn’t take a detailed study of the salaries they bring or send back home and the pensions they receive, to know that these total to billions of rupees. For example, during this fiscal year, according to the UK’s Ministry of Defense, retired Gurkhas will collectively receive an additional 6.7 billion rupees as part of a pension hike.

Perhaps more importantly, on countless occasions when the government failed to deliver basic social services, these individuals managed not just to lift their own families out of poverty, but also contributed to broader social development by establishing schools and investing in providing drinking water for their villages. Yet, this group has long endured discrimination and been reduced to stereotypes. For example, lahure, the word used to refer Gurkhas, often suggests “uneducated”, dumba is literally “sheep” and sojho, dumb or excessively honest. At the same time, the governments of Nepal and the UK also exoticize Gurkhas, when they extol them as “brave” (veer Gorkhali) or “vicious” killing machines.

The four million Nepali migrant workers abroad today face some similar issues, but their overall experience is significantly different than that of Gurkhas. They often earn poorly and perform hard labour or manual work that offers little prestige. They have little by way of job security, and their prospects in Nepal, when they return, are uninspiring. For all this, they pay hefty fees prior to their departure, often having taken on high interest loans to do so. Despite these challenges, these individuals together make the single largest contribution to Nepal’s economic growth -- recent World Bank data shows income from remittances is as much as 28 percent of this country’s GDP.

Their lives and options are made harder by the social and political ambivalence towards migrant workers, which results in policies and approaches to migrant work that further marginalize and discriminate against those who already endure substantial difficulties. Current policies are such that not only do migrant workers usually have to pay manpower agencies to dalals (middlemen), through the nose, they even have to go through dalals to get their mandatory work permits from the Department of Labor and Migration, in order to leave the country to work.

No matter how much we talk or write about migration, many of us reading this will never understand how profoundly migrant workers are challenged once they go abroad. A heart-wrenching number of them return in coffins; government data shows that 821 Nepalis died while working abroad last year. Those lucky enough to survive live in cramped quarters, often dozens to a room, work in inhospitable climates and inhuman conditions, and often get paid less than they were promised -- or not at all. But with loans to be repaid and an abiding sense of responsibility for their families back home, they endure these conditions until it is time for them to return home. For many migrant workers, their hard work pays off: they are able to free themselves of debt and liberate themselves from master-slave relationship with feudal or predatory lenders. They can send their kids to boarding schools, help family members with health-related expenses and provide them opportunities to start anew.

Also Read - Injured in Saudi Arabia, a worker is told: “It was your bad fate”

Discussing in detail the broader impact migrant workers have had on development in Nepal is beyond the scope of this short piece. But you only have to look at Nepal’s rapid urbanization, and the way social, political and economic dynamics in different social, ethnic, religious and political spheres are constantly being restructured and redefined to grasp that migrant workers are fundamental agents of change in the Nepali polity at large. Despite this, they remain not only marginalized and unrecognized but are also looked down upon and discriminated against, treated as an inferior and uneducated social class. One of the most notable examples of this callous attitude was the mass disenfranchisement of migrant workers during the last elections.

The need for changes in rhetoric

Like any individuals in society, migrant workers care about their ijat or dignity and their reputation. They want to be respected. In most cases, their communities do give them ijat. Families are proud to have a breadwinner -- male or female -- who is bahira (overseas). But in the higher echelons of society and urban settings in particular, the loudest rhetoric is about creating employment for youths inside Nepal so that they can stop going overseas. Such rhetoric is intended to evoke a deep sense of nationalism, yet it implicitly portrays migrant workers as unloving, unpatriotic, and self-centered, in addition to being somehow inferior.

Such a populist and empty nationalist narrative is at odds with actual state-making processes in Nepal, in which migrant workers have long played a crucial role. What could be any more patriotic than sacrificing so much in order to support family, community, and nation? Is that any less nationalistic than officials who hold high positions or so-called high-status wealthy individuals, or any celebrities for that matter? Until the government actually translates its rhetoric into reality, the country should, instead of being ashamed of its migrant workers, be extending its gratitude and rolling out the red carpet for the unsung heroes of the nation.

Dhirendra Nalbo  Dhirendra Nalbo, PhD is the co-founder of the Open Institute for Social Science where he teaches and co-directs its Research and Writing program

The Nepali economy is going through a liquidity crunch. The Record explains just what that means.