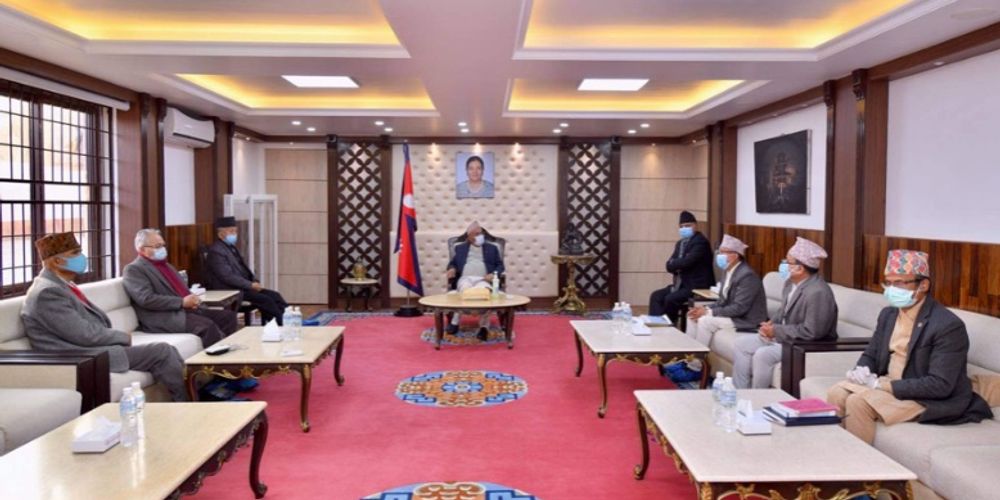 Shortly after his move to dissolve Parliament was endorsed by the President, Prime Minister KP Sharma Oli summoned Chief Election Commissioner Dinesh Kumar Thapaliya and other commissioners to the PM’s residence in Baluwatar. At the meeting, Oli instructed the commissioner to focus all his energies on holding elections to the Lower House of Parliament in spring. The spring dates--for April and May--were announced on Sunday by President Bidya Devi Bhandari after PM Oli had made the recommendation that an election be held.

But will the elections actually happen?

Chief Commissioner Thapaliya has briefed the media that with the government having decided to hold the next round of parliamentary elections, poll-related preparations have already started. According to him, they are working to finalise the voter rolls on the basis of the registrations made so far.

For former bureaucrat Thapaliya, his agreeing to conduct an election doesn’t reveal where he actually stands on the issue. First, he’s the election chief, and in that capacity, it’s his responsibility to support the government’s decision and disseminate positive messages about creating a conducive environment for holding the election. Secondly, PM Oli himself had appointed him as the election head. Given his ties with the head of the government, who appointed him to such a coveted position, he is obligated to side with the government.

Technically, Nepal’s Election Commission has the capacity to hold elections at all levels pretty quickly. In 2017, it proved it could handle the logistics by holding three sets of elections in less than a year, and that too when the country was riven apart by the extreme polarisation resulting from the politics of hills versus the Madhesh.

But the upcoming parliamentary elections will be held in a completely different context. Next year’s slated elections have turned into a political issue, and that aspect overshadows all technical and legal issues related to them. Those who have experience overseeing elections have questioned the premise for holding them. Former election commissioners who spoke with The Record say the country can’t hold elections just because the government announces them. The elections called by Oli, according to them, cannot happen unless other stakeholders, mainly political parties, agree to contest in them.

There is also the matter of whether Nepal has the resources to hold the elections. Its economy, which is overwhelmingly reliant on remittances and tourism, has cratered due to Covid-19. According to the National Planning Commission’s estimates, because of the pandemic at least 1.6 million people have lost their jobs and 1.2 million people have been driven into poverty. Covid-19 has already reduced the national GDP by NRs 200 billion.

And yet, in such dire times, the President on the recommendation of PM Oli set a new election date without consulting even Oli’s Cabinet members and party leaders. Elections are a costly affair. In 2017, an estimated NRs 62 billion was spent to conduct provincial and federal elections, while NRs 69 billion was spent on local elections, according to the Election Observation Committee Nepal. The overall budget--of NRs 131 billion--for those elections was NRs 16 billion more than the country’s health budget allocated for the current fiscal year.

More importantly, early elections weren't obviously accounted for when this fiscal year’s annual budget was planned. Thus, the government will have to divert funds that were earlier allocated to other development activities to conduct next year’s elections. That money could have been better spent on treating corona patients, many of whom have been dying for lack of proper health care.

In recent years, no major political party has refused to participate in Nepal’s elections. But they have serious reservations about the upcoming one, especially because of how Oli dissolved the Parliament without consulting any of the major political parties.

The major political parties and most lawmakers in all parties were not in favour of the dissolution of Parliament. A majority of lawmakers are preparing to challenge Oli's move at the Supreme Court, wherein about a dozen writ petitions have been filed against the decision to dissolve the Parliament.

Save for Oli’s supporters, no one is happy with the prime minister’s recent political move. “The way we worked to hold elections to bring democracy back on track made for a really difficult job. But that same parliament we set up has been dissolved without completing its full term,” said former chief election commissioner Ayodhee Prasad Yadav, who successfully conducted three sets of elections in 2017. “This is really unfortunate for everyone—the people, the political parties, and of course democracy.”

The major political parties still remain hopeful that the Supreme Court will reinstate the Parliament, and that the country will not have to go for early polls. But no one can say whether an order against Oli’s move will be issued by Chief Justice Cholendra Shumsher JBR, who had recently supported Oli in recommending members to the constitutional commissions (when even ruling-party members had refused to take part in the recommendation process). Because of his close relationship with Oli, CJ JBR was recently able to name some JBR loyalists as members of several constitutional bodies, according to media reports.

And politics may take yet another turn if the highest court interprets the Constitution correctly and reinstates the Parliament. Any leader from the ruling Nepal Communist Party (NCP), most probably Pushpa Kamal Dahal, could replace Oli as prime minister, and Madhav Kumar Nepal may become party chief.

But if the court endorses the dissolution of Parliament, there will be no other option for political parties than to go for elections. There are questions too about whether Oli will want to go for election while his chances of winning are waning. It’s also unclear whether the NCP will continue to remain intact since the leaders--who are divided into two camps, one led by Oli and the other by Dahal and Nepal—are preparing to expel each other from the party, with both camps claiming the official legacy of the NCP.

“It’s not easy to guess everything in the dark. Things will be clear only when the court comes up with its interpretation,” said former election chief Yadav.

Yadav does, however, believe that the elections can be held in May as there is plenty of time to complete the requisite preparations.

“The political pandemic has overshadowed all other issues, including the Covid-19 pandemic. It’s not easy to predict how things will unfold, though. Anything can happen in politics,” he said. “For now, all we can do is wait for the court’s decision. If the court endorses a fresh mandate, as proposed by the government, the parties must opt for elections--even if the people are suffering from other pressing problems.”