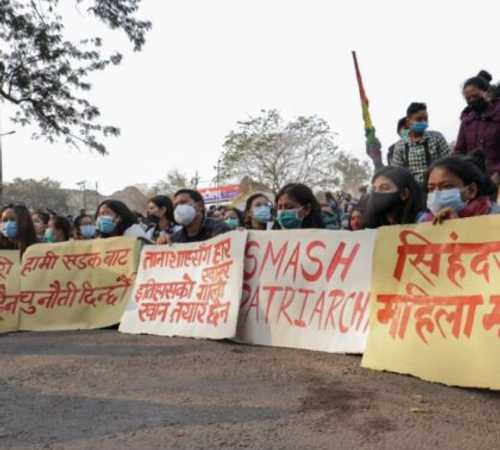 Mourners dressed in white carried a woman’s body in a mock funeral through the streets, followed by women dressed all in black with blindfolds over their eyes and masks over their mouths. They chanted, they sang, they danced, and they gave speeches. At the women’s march on Thursday, hundreds of protestors, mostly women, paraded through the streets, demanding an end to impunity and the continued violations of their rights.

The women’s march began from Basantapur at 2pm on Friday and snaked through Kathmandu streets to Bhadrakali. Over 500 protestors carried placards and chanted slogans demanding an end to rape culture and the identification and arrest of the rapists and murderers in two cases that have sent waves across the country. Nirmala Pant, a 13-year-old from Kanchanpur, was raped and murdered in 2019 while more recently, Bhagrathi Bhattai, a 17-year-old from Baitadi, is believed to have been raped and murdered on February 5. The perpetrators in both cases have not been caught or even identified.

“Nepal is going backwards instead of moving forward on a progressive path,” Surasha Ojha, a graduate student at Ratna Rajya Campus, said.

Although the march had been planned after Bhagrathi Bhatta’s rape and murder, it was a new rule proposed by Nepal’s Immigration Department that precipitated it. On Wednesday, news emerged that an amendment to the Immigration Procedures, proposed by the Immigration Department, would now require all women who wished to go abroad on a tourist visa to first acquire permission from their family and the local government. After a loud and angry swell of criticism, the authorities backtracked and hastily issued a press statement the next day, stating that they had been misrepresented. The new rule would only apply to women under 40 going to the Middle East and Africa for the first time, the Immigration Department clarified. But women are not buying this either.

The new rule, even if it did only apply to women going to the Gulf and Africa, is still wrong because it fragments women into classes -- among those going for work and those going for study or other reasons, Pranika Koyu, a poet and activist, told The Record.

“The new rule is sexist not just because it targets women but also because it ignores the plight of male migrants. And it is ageist because it sets a limit of 40 years. If we are adults at 18 years and we can acquire citizenship at 16, then we have our right to self-determination,” said Koyu. “The government could’ve come up with guidelines for safer migration but it cannot say, ‘you might get trafficked so don’t go’. You cannot restrict anyone’s mobility like that.”

The Immigration Department’s proposed new rule has incensed both Nepali men and women, with many decrying it as a severe setback to the feminist movement and the hard-earned rights of women.

“I think it is just a gimmick but there is a danger to it. It shows the thought process behind it and that’s what we need to be careful about,” said Hima Bista, executive director of WomenLead, an organisation that provides leadership training to young women. “This is a big backlash to the work that been going in Nepal’s feminist movement.”

Bista gave a fiery speech at Bhadrakali, calling out politicians for their inaction in high-profile cases of rape and murder.

“We are Nirmala, we are Samjhana, we are Angira and today, we are Bhagrathi. These politicians will need our votes for the next election and let me just say that my vagina will vote you out,” Bista said to cheers from the gathered crowd.

In 2019, after Nirmala Pant’s rape and murder, similar rallies had broken out across the country, demanding action against the perpetrators. Although the case made national headlines, the police have yet to identify a suspect. There are fears that something similar will happen in Bhagrathi Bhatta’s case.

Many women at the march said that inaction in cases of rapes and the introduction of regressive rules are all part of the same patriarchal mindset that characterises much of Nepal’s political and bureaucratic class. While on the one hand, the authorities seem to pay little attention to crimes against women and on the other, they pay excessive attention to rules that are ostensibly aimed at protecting women but only serve to limit their rights.

“This [immigration rule] will push back all the progress that Nepali society has made,” said Nagma Mali, who works for Voices of Women media, a feminist media organisation. “The fact that this law is only targeted at women shows the narrowmindedness of the people who drafted it.”