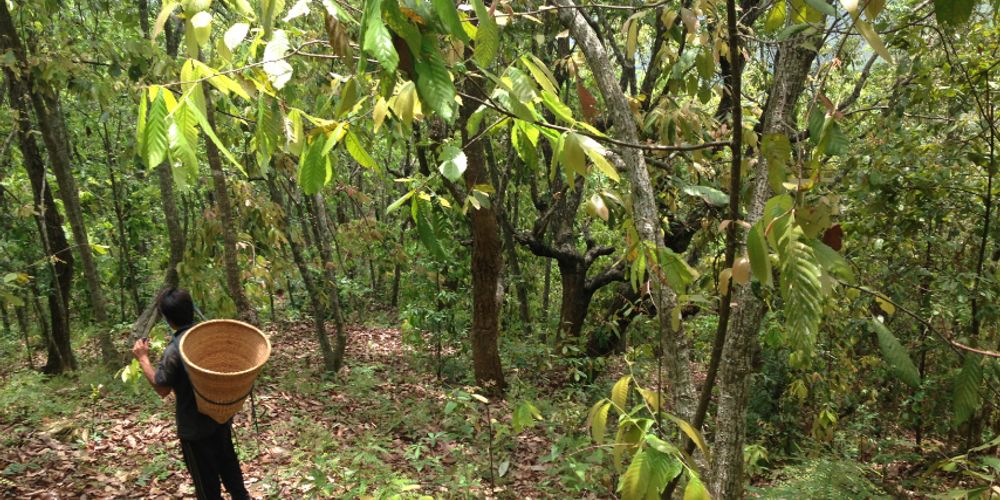 In Patiswara village of southern Gorkha district, there’s a strange phenomenon occurring relating to farmers and their crops: it turns out people don’t eat what they grow anymore. Currently, the main crops grown on the upland terraces above the Trishuli River are makai (flint corn) and kodo (finger millet). The crop cycle typically plays out like this: livestock manure is carried by the women in dokos to the terraces, dropped into piles onto the bare, red soil, and spread until the earth is plowed. During plowing, the terraces are seeded with corn in dry season, then transplanted with millet in monsoon. During harvest, the grain & straw are carried back to the house, threshed by hand, and stored. In the long dry season when there is no fodder to cut, the corn and straw are fed to the livestock. The millet is fermented and distilled to make rakshi. Occassionally, families may use some of their grains for popped corn or millet dhindo (grain porridge). But in the end, very little calories are consumed for a whole season of agricultural labor. The animals are fed with corn and straw, to produce manure, to go to the field, and grow more corn and straw. Cow to corn to cow.

The traditional crops of southern Gorkha originally consisted of these heirloom varieties of corn, millet, and oil crops in the summer, then wheat and legumes like musuro daal and kerau in the winter, with a kitchen garden near the house for vegetables. Families ground their grains in millstones at the front of their house, and ate dhindo with their meals. They subsisted on seasonal wild foods like the shiplikaan tree’s new young leaves, stinging nettle shoots, thaaki tree pods, fermented bamboo shoots, koiralo tree flowers, and wild mushrooms harvested from the forest floor to supplement the vegetables they grew in the garden. Wild fruits came from kande and nibhara fig trees, from ainselu and kaaphal berries; wild roots came from gittha and byakur (air potato) and wild yams. Now most families eat polished lentils, potatoes, and white rice each morning and evening, all purchased at the village pasal, supplemented with some vegetables from the garden.

Drought is becoming a consistent problem in this area because of unpredictable rainfall the past several years, with many short and insufficiently wet monsoon seasons. But the main reason for the ebbing vigor of agricultural livelihoods in this village is a lack of labor. Because of this, many people don’t grow crops in the winter anymore; a large proportion of farmland sits brown and barren for a third of the year. Significant tracts of terraced land cultivated within the last 30 years now sit overgrown with weeds and encroached by forest.

In upper Dolakha district, the people of the Simigaun village are still growing the majority of their own food. In fact, most of the year they eat from their own fields. The local wheat variety, Mundule, stands hardy and ready for harvest each spring, followed by potatoes, field beans, and corn. It doesn’t look like their agricultural livelihood is under much pressure: the soils in the baari are dark and fertile, well-drained, with plenty of streams and springs flowing year-round, and most of the terraces in view are full of ripening crops. But they are cultivating only about half of the land they did a few decades ago, and many terraces outside the central village areas are fading back into the surrounding hills.

A woman told me about her childhood in Simigaun fifty years ago.  She remembers having to walk for six days, three days out and three days back, to buy sacks of sugar, salt, oil, white rice, and other goods.  There was no road at the time, but now because of the nearby development of a hydropower plant, a road reaches within a one-hour walk from the village. Buying goods and travelling is easier, and people have begun to move back and forth between the village and Kathmandu regularly for school and work. The woman’s husband  died in a mountaineering accident when her son was one or two years old. Her son is now older, starting college in the city, so her main challenge in farming is that she is often alone in the garden and fields. She explained that people leaving the village was the main reason for all of the peripheral abandoned farmland, and estimated that at least one third of people from Simigaun have now permanently left.

Agricultural livelihoods in the mid-Hills are being directly impacted by mobility of villagers in search of work. In the case of Patiswara, the men of southern Gorkha have had a history of becoming soldiers for the British Gurkha or the Indian Army for generations now, serving in foreign wars and returning with life-long military pensions. Now it is increasingly common for the fathers of the village to be out for work in the Gulf, Malaysia, or India, often for years at a time. Some families earn seasonally from their suntala orchards and by selling livestock, but income generation here is largely fueled by remittance.

In Simigaun, a young man told me about his experiences working in the Gulf. In the village, he farms with his elderly parents, raising traditional crops, livestock, and some fruit trees. But as the only son, he was responsible for generating income. He first went to Qatar, and did very difficult construction work under harsh conditions and for low wages. He eventually left and went to Saudi Arabia for two years, and worked long hours in a hotel under exploitive management. He’s back in the village now, but has accrued debt from rebuilding his family’s home after the earthquake. His plan is to go back to Saudi Arabia for a few years where a friend can get him a better hotel job.

Labor migration, both within and outside Nepal, has played a central role in subsidizing agricultural households and rural Nepali livelihoods for centuries, especially in the mid-Hills. However, the scale of out-migration and the remittance economy in Nepal is has dramatically increased in recent decades, with nearly a quarter of the country’s GDP currently constituted by remittance (compared to agriculture at one-third), and just over half of Nepali households receiving some sort of remittance income. In a country that has historically maintained a predominantly agricultural economy, this is a notable turning point.

Aside from older generations leaving the village for work, many young villagers are now leaving to attend school. In Simigaun, the young people typically move to an urban center for better schooling after a certain grade. Gaps in the age distribution of the village are evident, with predominately middle-aged and older members filling out the village community. A similar age spread is noticeable in Patiswara village. Eventually, many of the youth who have finished school permanently move to Kathmandu and stay with extended family, pursuing college degrees in Hotel Management, BIT, or Computer Engineering. In the ideal trajectory of Nepal’s current education system, schooling leads the youth out of the village permanently. There’s no vocabulary in the modern curriculum for how to lead a fulfilling life in the village after school. It’s uncommon to find a vision for youth finding prosperity as farmers. Perhaps this has to do with how modern education is defining “success”; few would describe it as a self-sufficient, rural lifestyle.

Thus, the story in the villages of Patiswara and Simigaun has become one of exit. With so many family members outside, helping hands for fieldwork are in short supply. Less land is cultivated in fewer seasons, and the crops grown can no longer sustain families’ consumptive needs. Which has contributed to another shift: exchanging a historically agrarian and self-sustaining society for a system of dependency on money, and a consumer lifestyle. Without subsistence farming, families are more dependent on cash to purchase food, which is most often generated from family members working outside the village. Which, in turn, reinforces the labor shortage. The closed loop feeds itself, similar to the cow-corn-cow cycle.

An older man told me a story from when he was young, growing up in Patiswara. His family used to eat wheat or millet dhindo, which was grown on his family’s land, every night for dinner. One night he ate at his friend’s house instead, and his friend’s family served white rice with the meal instead of dhindo. At the time there was no road, so everyone in the village had to carry their sacks of rice from the Prithvi Highway, which took at least 4 hours up very steep terrain. When he returned home, he asked his father why his friend’s family was eating purchased white rice and their family was not. Was it because they were poor? His father said, No. His friend’s family was eating rice because they weren’t growing enough of their own food, and were experiencing a food shortage. From this perspective, most of the middle Hills of Nepal, perhaps the whole country, is experiencing food shortage now. Traditional agricultural subsistence is being challenged by movement in society, leaving rural communities caught between their fields and the pasal, neither fully providing what they need.