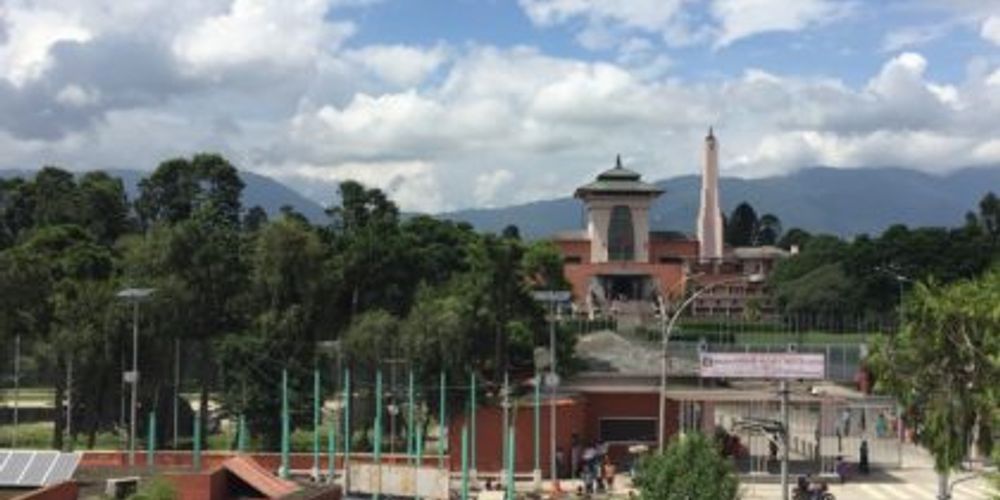 Bryony has published three articles on her research. She was in Kathmandu over the summer and The Record caught up with her to discuss her research on Narayanhiti, the Palace Museum and on the Republic Memorial. Below are edited excerpts from the conversation:

In Part 1 of this interview, Bryony Whitmarsh explains how the Palace came to be built, and  what symbolic messages it was meant to convey.

How is the Palace Museum managed?

The Palace Museum is quite different from other museums in Nepal. It is not a part of the Department of Archaeology, for example, despite attempts to incorporate it, including by the late tourism minister, Rabindra Adhikari. The museum is bureaucratically positioned at ministry level, under the Ministry of Culture, Tourism and Civil Aviation, and as such sits separately from other government run museums, which are positioned under the Department of Archaeology. The Museum therefore does not follow professional museum standards that are driven by a commitment to education and preservation of their collections. It also sits outside of the Nepal Trust, which was set up to account for and manage all ex-royal property. As such, its special position could be seen to be indicative of political interest in the project. Additionally, following an agreement with ex-Palace staff early on, the Director of the Palace Museum has always been a former Palace staff, and not just any bureaucrat.

Museums are all constructions and balancing acts between competing demands, to some extent. Could you talk about the main tensions in Narayanhiti Palace Museum?

The Palace Museum embodies the paradox between the need to split the royal past from the republican present, but also maintain a sense of connection with the same royal culture from which the nation’s identity has been derived.

A further tension is between former Palace staff who now work in the Museum, and government bureaucrats and politicians. The more I spent time with the ex-Palace staff operating the Palace Museum, the more I noticed that they didn’t embrace the official narrative. The staff feel marginalized and have used their minimal power to show the palace as a working institution and the royal family as a normal family, all doing their best for the nation. The government and politicians have different aims: they are keen to show the Palace as being open to the public and to demonstrate its official function as a ceremonial space. The staff believe that showing more things and more spaces in the site will increase understanding and respect for them and for the former royal family by focusing on “royal culture, diplomacy, social, and administrative activities”. Among the places on the site the staff want to open up are the old secretariat building (now the passport office), King Birendra’s residence Sri Sadan, and King Mahendra’s garages.

There are some strange things on display in the Palace, such as elephant’s feet that open up to hold drinks and cigarettes. Could you talk about these objects?

Many of the objects were not originally on display in the Palace and were not used by the most recent members of the royal family but have been brought out of storage by the staff. Some of the objects are from Tribhuvan’s time. The staff also brought out and labelled the chair that Gyanendra used in his chaotic last official press conference. Although Gyanendra and his reign is not highlighted inside the Museum where the focus is on Birendra, the staff showed the chair in order to highlight, as they see it, the great sacrifice Gyanendra made by leaving his position for the sake of the country.

That the staff were able to make modifications to the displays was symptomatic of the governmental understanding that the staff themselves had been consigned to the past along with the institution of the monarchy and its most prominent palace. Having allocated the staff role  and left them to run the palace as a museum, they were expected to do very little.

One question that many visitors have - why was the King and Queen’s bedroom so small?

In order to maintain the believability of the space as a royal bedroom, staff offered varying explanations for the modest size of the bed and ‘simple’ nature of the interior decoration. These explanations ranged from the sublime to the ridiculous, including this quite extraordinary rationale:

“To make it earthquake proof this room is smaller than the other rooms of Narayanhiti Royal Palace. As the belief goes that if the room is small then its ceiling is also small hence there will be less chances of it falling.”

When Mahendra commissioned the palace, it was the larger Dhading room, next door, that was supposed to be the royal bedroom. But this fact, alongside the fact that he stayed in Mahendra Manjil, Birendra in Sri Sadan and Gyanendra in Trisul Sadan were irrelevant. It was imperative to the ex-palace staff to have a space in which the personality of Birendra as modest and patriotic could be recalled.

Interventions like these by ex-palace staff encourage visitors to experience nostalgia, in this case reflecting the uncertainty of the political present, through continued interest in Birendra following his death. Through this intimate encounter with the ‘royal bed,’ visitors are encouraged to remember a modest and patriotic king, an imagined past that can be used in the present. A common response to the cultivation of the memory of Birendra was for visitors to imagine a previous period of stability and security, to associate this with his reign, and to yearn for the return of the king.

Your work focuses quite a lot on the experience of the ex-Palace staff who now work in the museum. Could you talk a bit about what the staff have gone through?

The ex-Palace employees who were tasked with presenting the palace to the public experienced, through being sidelined at the Palace Museum, the ways in which the new republican Nepal, was predicated on the condition of forgetting Nepal’s royal past, a past that included them. The staff have spoken to me of their pride in their previous role, their feeling of loss, and the differences between their previous role in the palace and their new role in the museum (e.g. one staff member went from supervising a store of sanitary ware to a tour guide). The staff feel a disparity between the respect with which they were held as a member of palace staff (positions that had often been passed down in families for generations) and the lack of value now placed on their individual experience.

One of the reasons that the ex-Palace staff have been interested in talking to me for my research is because of their job situation mentioned earlier. Until 2015 the staff were relegated to a special group in the Ministry of General Administration. They were frustrated as they were not part of the main civil service and were denied promotion based on length of service (as occurs elsewhere in the civil service). In 2015 the staff took the government to court and were all given the opportunity to say which part of the civil service they wanted to work in. Some of the staff did choose to move, but a significant number remain working in the Palace Museum.

In Part 3 of this interview, Bryony Whitmarsh discusses how the Museum memorializes the recent past, including the Royal Massacre and the new addition, the Republic Memorial.

Women of the People