The song and the soil

The song and the soil

Set during the heart of the Gorkhaland Movement, the novella ‘Song of the Soil’ exhibits how revolutions are born in the minds of a few but built on the backs of thousands. 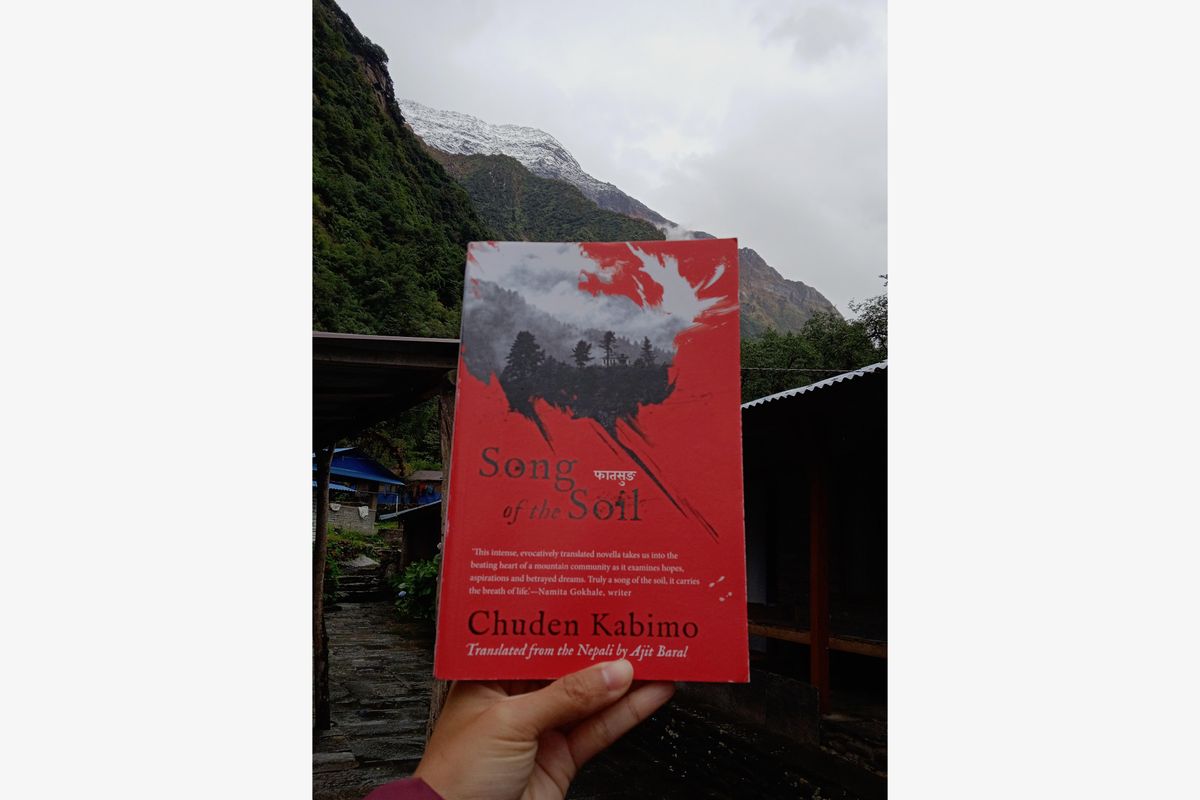 Song of the Soil, the recently released English translation of Chuden Kabimo’s Nepali-language novella Fatsung, tells the story of the Gorkhaland Movement through individual experiences of loss, friendship, and family.  (Marissa Taylor)

A major earthquake has just rattled West Bengal. Landslides have swept away homes and blocked roads. Telephone lines are dead and there are frequent tremors. Amidst the chaos, a young man receives a phone call. A voice pleads with him to come back to his village of Malbung. His childhood friend Ripden is feared to have been swept by a landslide.

This is how the novella Song of the Soil begins — with the death of Ripden, a pivotal character. Set in the hills of Kalimpong and Darjeeling, along the Teesta River, Song of the Soil, the recently released English translation of Chuden Kabimo’s Nepali-language novella Fatsung, tells the story of the Gorkhaland Movement through individual experiences of loss, friendship, and family.

The narrator, who remains unnamed throughout the novella, has not been home for 15 years. Yet, memories of his childhood remain — of him bunking school with friends, of his grandfather telling him off for doing so, but especially of the times he spent with Ripden, who he idolized as a child.

As the narrator returns to his village and tries to come to terms with Ripden’s death, he takes the reader back in time to grade five when all that mattered to him was Ripden. And what Ripden wanted more than anything was to find out where his father was.

For the unaware, the Gorkhaland Movement dates back to 1907 and demands the creation of a separate ‘Gorkhaland’ state in India for ethnic Nepalis residing in Darjeeling, Kalimpong, Kurseong and other hilly districts. Nepali-Indians in these hills have long been arguing that they deserve a state of their own since their cultural identity is distinct from that of the majority Bengalis in West Bengal.

The movement had long remained peaceful but it took a violent turn in the 1980s, under the banner of the Gorkha National Liberation Front, led by Subhash Ghising, resulting in the bloodiest conflict ever witnessed in these quaint hills. Estimates suggest more than 1,200 people lost their lives in 1986. The same year when this novella is set.

Written almost entirely in flashback, Song of the Soil is a tale of friendship, identity, love, and loss. Set during the heart of the Gorkhaland Movement, the story exhibits how revolutions are born in the minds of a few but built on the backs of thousands. The novella is the story of revolutionaries who believe in the cause, like Raju Sir and Chief, for whom the struggle for identity and respect and a better life is very real. But the novella is also about other people, teenagers like Norden, Nasim, Surya, and Rachela, who romanticize the idea of a revolution and unknowingly become entangled in a quagmire of chaos, politics, violence, and ambition — ultimately losing everything.

The novella also touches on how the Lepcha people, despite being native to the region, have historically been marginalized and are still discriminated against for being ‘beef-eating illiterates’, forced to eat separately from Bahuns and Chettris during communal gatherings. The Lepcha people’s longing for a communal identity is also highlighted in the context of the movement, which fails to acknowledge their historical and cultural significance. Perhaps by naming the novella ‘Fatsung’, a Lepcha term which literally translates to ‘song of the soil’, Kabimo is highlighting the Lepcha people’s connection with the hills of Kalimpong and their unfulfilled longing for respect as a people.

In addition to the identity crisis and the inherent contradictions of revolutions, Song of the Soil also tackles issues of poverty, caste, development, and the politicization of revolutions. But it does so rather hastily. By compressing such grave issues into a 196-page novella, the reader does not get an opportunity to really relate or sympathize with the issues nor with the characters, who the writer has not taken much time to develop either.

As far as the writing goes, it is fast-paced, engaging, and even occasionally funny. However, at times the translation, otherwise quite aptly translated by Ajit Baral, feels too literal — such as ‘my eyes started to flood with unseasonal rain’. This can make the prose a bit dry. The narrator remains nameless throughout the novella, which is perhaps a tool used by writer Kabimo to show that he too is experiencing an identity crisis. He is non-committal, almost nonchalant, in his narration, and we barely know him, which makes it difficult for the reader to connect with him.

Nonetheless, the novella is an important one. It tells the stories of people and communities who have long been overshadowed, oppressed, and cast aside for the sake of the ‘greater good’.

Song of the Soil

Writing about disparate ideas like sustainable cities and food cultures, Prashanta Khanal has learned a lot and now, has a lot of advice to offer.