In addition to building resilience against climate change, we must also come to terms with the trauma it leaves us with. 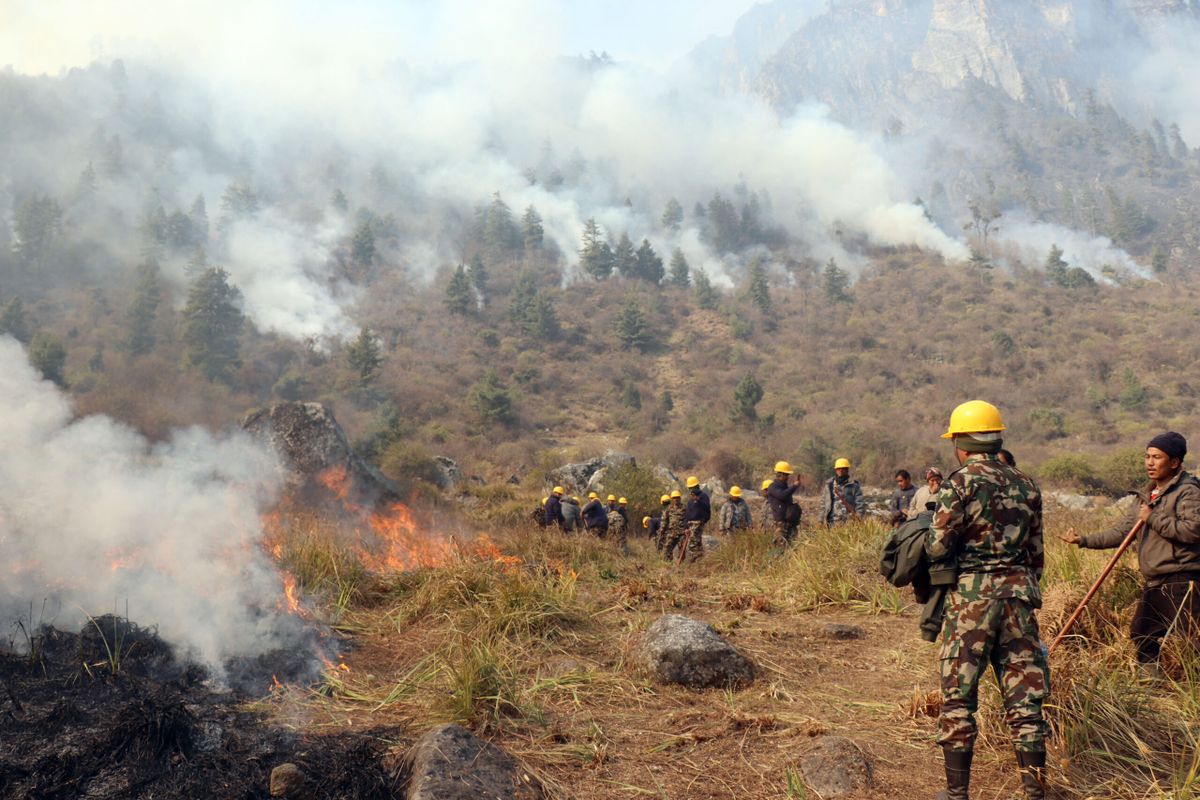 In 2021, Nepal battled its worst forest fires in years. And for those living on the frontlines of such disasters, climate threat is an existential one. (RSS)

“It is getting exhausting now. Every year, a new disaster arrives just when we think life is returning back to normal,” shared 26 year-old Pallavi Rauniyar in a moment of visibly impassioned indignation. “Is it asking too much of nature to be predictable?”

Pallavi is a resident of Bhokraha-Narsing Municipality in Sunsari district. In the last two years, she has had to hurriedly evacuate her house three times — twice in the middle of the night — because of flash floods along the Sunsari Khola triggered by heavy, erratic rainfall between periods of unusually dry weather. Upon returning home last year, she found that the deluge had swept in a family of snakes inside her home and farm.

“I was lucky to find them in time, but others weren’t and got bitten,” she said.

My interactions with Pallavi and other Sunsari residents weighed heavy on my mind as I returned home to Kathmandu last month. I became convinced that the notion of climate change being a non-issue in the minds of those on the frontlines of the crisis was an illusion. Young Nepalis, mostly from farming communities, were acutely aware of recent environmental episodes, such as this year’s record wildfires, hazardous air pollution, severe drought conditions during the winter, the worsening monsoon landslides, and increase in climate change-induced unpredictable weather.

Just a few weeks after my dialogue with Pallavi, Kathmandu was hit with a record-breaking 121.5 mm of rain in the middle of the night on September 5. Residential areas around Teku, just besides the Bagmati, were completely inundated within hours as spillovers from the swollen river gushed into houses in densely packed urban centers like Balkhu, Balaju, and Jamal. An estimated 400 houses were damaged, with low-income neighborhoods and riverside informal settlements being the worst hit.

I have studied climate change for a sizable portion of my adult life. Yet, I can say with confidence that I could not have realistically imagined the cascade and scale of environmental crises Nepal would go through in 2021 even three years ago. We have known about the compounding nature of factors causing climate change for decades, just as Nepal’s unique disaster vulnerability profile has been no secret. And yet, I am finding that watching it all unfold in real time, even without being on the frontlines for any of it, can take a heavy toll.

Despite a deadly second wave of the Covid-19 pandemic, its economic impact, stories of human rights abuses faced by migrant citizens abroad, and the political theater of parliament dissolutions and the resulting executive leadership change, environmental issues have remained prominent in the minds of Nepali citizens throughout the year. The sliver of optimism afforded by the rescission of excise duties on electric vehicles put in effect last year was also washed away by the government’s decision to backtrack on several years’ efforts towards banning the trade of river and mine-based construction material. Every passing month, it seems, brings more bad news for Nepal’s chances against the effects of climate change.

For those on the frontlines of the disasters, the climate threat is already an existential one. For the more privileged among us, who can afford to watch and fight from a distance, it is still a lot to take in. And the baggage feels heavier with the knowledge that things are going to get worse before they get better.

Meteorologist, climate journalist, and author Eric Holthaus juxtaposes the often-cited phrase ‘climate resilience’ against ‘climate trauma’ in a recent publication on his newsletter, The Phoenix. He argues that the word resilience is often misused in the context of the climate crisis, as the idea of building ‘toughness’ against its effects tends to divert responsibility to the victims of the crisis.

This rings especially true in the current state of affairs, as the world’s carbon emissions have bounced back to pre-pandemic levels while governments and fossil fuel giants are continuing to operate largely unchecked despite study after study showing unprecedented global awareness and concern over the climate emergency.

The situation seems even bleaker in the Nepali context. Despite all the ways in which our government has failed us with respect to environmental regulations, policies, biodiversity protection, and disaster preparedness, the truth of the climate crisis is even more enervating. Nepal contributes a negligible 0.02% of the global share of carbon emissions. We are thus not the ones causing climate change. Instead, it is something being done to us.

A quick dictionary search reveals that the word trauma has two definitions. It can be used to either describe a (generally severe) physical injury, or it can be used in reference to a deeply distressing or disturbing experience. Holthaus argues that both definitions fit the climate predicament like a glove. The climate crisis is both a tangible injury on the planet, worsened over time with decades of ignored warnings, as well as a disturbing reality that is becoming more and more difficult to both ignore, or stare directly at.

For citizens of Nepal and other countries in the Global South, the latter definition manifests in complicated, even self-contradictory, ways.

There is the trauma from events such as the aforementioned crises we have seen over the past few months. Then there is the trauma of knowing such events are likely to become more frequent and intense over time, as carbon emissions are forecasted to soar with economies pouring stimulus money into fossil fuel as part of their pandemic recovery plans.

There is the trauma from seeing the global normalization of climate injustice — such as in the recent viral clip where a victim of the July Germany floods is heard saying “You expect it in maybe poor countries, but you don’t expect it here.” Then there is the trauma of begrudgingly reconciling with the reality that climate change effects are, indeed, intimately linked with poverty.

There is the trauma from hearing about studies showing sharp increases in climate anxiety among children around the world. Then there is the trauma of knowing your country does not even have a comprehensive database of mental health indicators to gauge its standing.

New research has shown stark intergenerational inequities in the exposure to the effects of climate change. A 2021 study published in the journal Science predicts that a child born this year will live through, on average, seven times as many heat waves, twice as many wildfires, and three times as many droughts as their grandparents. Its results highlight a severe threat to the safety of young generations and bring to light the drastic urgency needed in reducing global carbon emissions.

By all reliable accounts, the next decade or two seem poised to challenge us like nothing before. What the world looks like thereafter depends on the climate action we see now and in the immediate future.

For us to effectively address this existential threat, we must come to terms with the trauma we have and build systems that will help us weather the incoming storms. It can take the form of fostering an environment of compassion and empathy, forming communities to support each other in times of crises, bolstering the activist community (who suffer from climate dread more than most) financially or otherwise, and committing to educate ourselves and others. We need to start talking about climate change trauma.